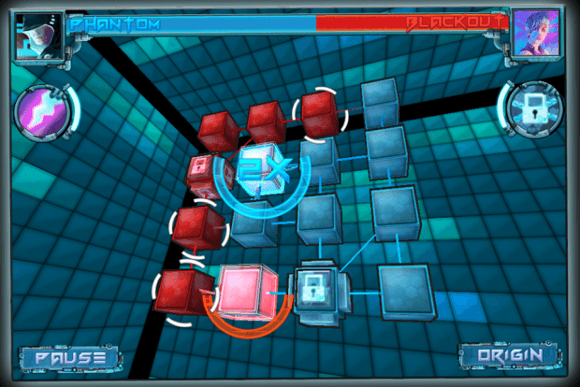 Unless you’re off the grid, digital security is now a part of your life, and SimCity has made it abundantly clear that being a gamer and being off the grid are now mutually exclusive. It’s no surprise that the next generation of games will place players in the hacker role more often, but Quadrilateral Cowboy this game isn’t. PWN: Combat Hacking is more akin to a hacking mini-game spun off from a AAA title than something that approximates Anonymous wish fulfillment. Does this frantic digital tug of war reprogram your brain for fun, or just make you want to log off?

Whether we’re talking about Aaron Schwartz, China, WikiLeaks, or Anonymous, there’s a lot of immediate, important, heavy pathos and ethos around hacking. PWN: Combat Hacking chooses to mine none of that, instead spinning an instantly forgotten yarn about a hacker tournament. The nine playable caricatures come with bios of the sort you might expect a character in Wave Race or Tony Hawk to be assigned, which most players won’t bother to read.

Each of the nine hackers comes with their own semi-linear board of levels to complete. As you play through the grid, you’ll unlock new hacking skills before capping your character’s arc off in a tournament finale. The game is not difficult, but losing in a late round will reset tournament progress, which is basically heresy for a mobile title. Each computer jock has to be unlocked by finishing the campaign of another, and power-up unlocks don’t carry over. Each competitor is extra proficient with one of the available abilities, but there’s nothing truly significant to differentiate them or their campaigns.

At its basic level, PWN plays out like a tic-tac-toe tug of war. Rounds are single combat on a mostly 2D set of connected cubes called “nodes.” I say “mostly 2D” because occasionally the game throws a level your way that can’t all be viewed from one angle, which only serves to annoy. Click on a node to initiate capture, and capture them all to win. Only one square can be captured at a time, so it’s very possible to brute force most of your engagements with a combination of faster fingers and strategic choice. When speed fails, it’s time to choose from a set of abilities that rock-paper-scissor each other and grief your opponent.

The eight power-ups, their less than intuitive icons, their counters, and their visual effects and indicators are a lot to take in. Forget about remembering what’s what if you don’t play the game for a day. Since the whole campaign functions as a tutorial, there’s no all-encompassing and efficient method to refresh yourself. Far worse is the total lack of something akin to a fighting game move list to refer to; a glaring omission.

Unintuitive power-up icons are the tip of the iceberg of visual design issues. Yes, graphics are muddy and drab, even crude at times, but this is a case where the visuals negatively impact the gameplay. Larger boards have been zoomed out to make room for the eight ability icons as well as the unnecessary health bar that tops the screen. The signal-to-noise ratio is simply too low, with so much happening at once that’s not communicated by immediately clear and recognizable visual cues. The ring indicating which node you’re attempting to capture is easily buried under graphical power-up flourishes, just to cite one example. The music doesn’t present any better, with a looping requisite track destined for muting. I was shocked when I noticed that the sound effect for selecting a level is the audio for the iPhone’s low battery warning. 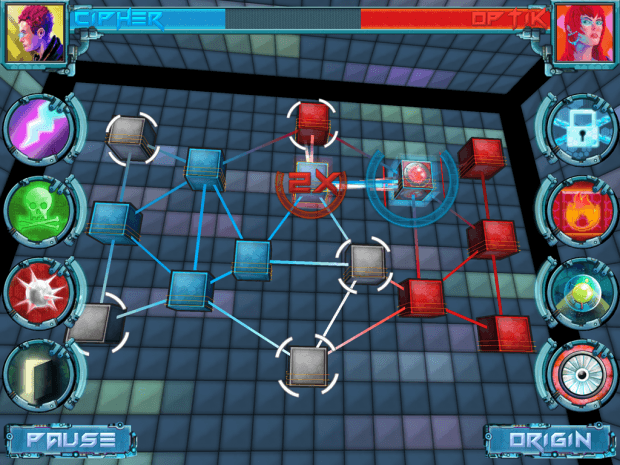 It’s a bummer that PWN doesn’t get the last twenty percent right, because there’s a quality, demanding, engaging game to be played underneath the bad design decisions. The skill ceiling is also very high if you’re willing to put in the time. I could easily see PWN as a selection for a mobile game tournament. Knowing I’ll have forgotten what does what in PWN: Combat Hacking will keep me from picking it up again, but I’d be very interested in a polished sequel.