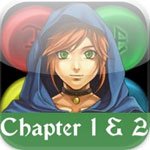 When it first hit the scene back in 2007, Puzzle Quest was a breath of fresh air. Combining Bejeweled-style gameplay with an epic role-playing adventure, the game pushed the boundaries of what could be done with simple match-3 mechanics. Now nearly two years later, this puzzling adventure has hit the iPhone.
In case you’ve missed its previous incarnations, lets first take a moment to get you up to speed. Puzzle Quest is a unique puzzle/adventure hybrid. The bulk of the gameplay is spent doing what you’d be doing in any match-3 puzzle game: matching three or more gems of the same color. The twist? You’ll be matching these gems as part of combat.
As you progress you a lengthy (40+ hours) adventure in a fantasy setting, you’ll be given a multitude of quests that will help you advance through the story. These quests range from the simple, like delivering messages to other kingdoms, to the complex, like defeating a series of enemies to take down a boss character. No matter what the mission at hand is, you’ll always tackle it the same way — through match-3 combat.
The combat system modifies the traditionally single player match-3 puzzle experience to make it a competitive arena of sorts, as you take turns with your enemy making matches on the board. Each gem cleared away gives you a certain type of “mana” which you’ll be able to use to cast spells against your foes. Other elements like matching skull gems will also help you defeat your enemy. But the battle goes both ways, and your challenger will be able to use all of these against you in an effort to drain your health too.
As the game progresses you’ll gain experience, which in turn can be spent on new spells and items to help you on your quest. You’ll be able to select from a number of hero classes, from groups of friends, control creatures, vanquish villains – all in all, Puzzle Quest offers up a fairly complete RPG experience without any of the traditionally complicated gameplay getting in the way. It’s hard to believe, but they’ve really found a way to bridge the gap between casual players and fairly deep gameplay. For fans of match-3 gameplay, it’s a crowning achievement.
While the praise we’ve just heaped on should be spread evenly amongst all versions of Puzzle Quest, there are some limitations in the iPhone version that simply can’t be ignored. While it’s reasonably priced, Puzzle Quest Chapters 1 and 2 doesn’t offer the full experience that can be found on other consoles. A final third chapter (which at the time of this writing has yet to be released) will need to be purchased for those looking to wrap up storyline. In that sense, what you’re purchasing on the iPhone is an incomplete product.
Other noticeable differences pop up fairly quickly here as well. Online multiplayer, a feature present in numerous other versions of Puzzle Quest, is completely absent here. This version doesn’t even offer a local single device multiplayer that lets you pass your iPhone back and forth with a friend. And while it was never an essential part of the formula, getting to take that competitive match-3 experience to a real world competitor is a treat that’s sorely missed here.
Touch screen controls work well here, but not necessarily the way you might suspect. Rather than simply sliding the gem in the direction you want you’ll need to tap the gem and then tap it’s destination. It’s an extra step that feels somewhat awkward at first, but is fairly easy to adapt to. With so much packed into such a tiny screen, I suppose it was the best way to make sure players are moving the gems they intended to.
While it is technically an incomplete product when compared to previous versions, Puzzle Quest Chapters 1 and 2 offers more content than any other game in the AppStore. At roughly 40 hours, it’s nigh impossible to run out of game here. Puzzle Quest was one of the last true innovations in match-3 gaming, and it still holds up as one of the best. While picking it up for the PC or Xbox Live will give you a more complete experience, the iPhone version offers up a great on-the-go game for anyone with a love of gem-matching puzzlers.