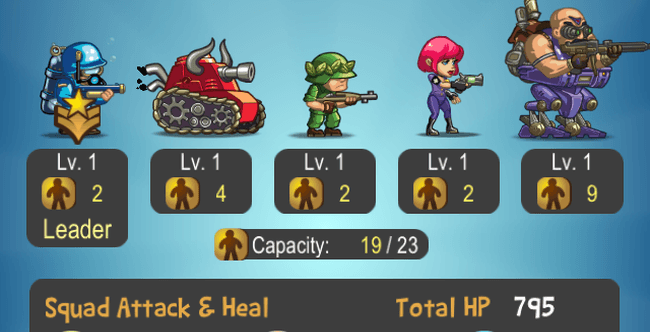 Everybody loves Puzzle & Dragons. So much so, that everybody else has tried their hand at making something similar. In Kabam’s case, it’s Puzzle Trooper: the same match-3 puzzle game/pseudo CCG hybrid, but with fewer dragons and a lot more burly soldiers. And tanks; can’t forget the tanks. Although as derivative as it may be, it’s still an incredibly fun system that works well. Heck, this time around it even feels less punishing to non-paying players!

Just in case anyone isn’t familiar with the formula, it goes like this: players have a small group of characters (in this case, soldiers) that can belong to a number of different colors. Below them is a grid of colored circles/spheres/gems that, naturally, match the different unit colors. By sliding one of these colorful doohickeys around and creating groups of three or more, they can power up their soldiers and allow them to attack.

The bigger the group and the more combos (i.e. groups cleared in one turn), the higher the damage. After enough turns pass, a unit’s special ability – including changing one color to another or doing direct damage – will become available. As the platoon charges through missions, and by extension enemies, more characters can be acquired for beefing up the ranks or simply upgrading favorites.

While that gameplay description could easily be mistaken for well over a dozen different iOS games (seriously), it’s still very much a formula that works. The core puzzle elements are fun on their own, and even more amusing when a good move results in a hail of gunfire directed at an opponent.

The collecting aspects are also just as habit-forming; with plenty of different units to find and upgrade, or gather up to sacrifice in order to strengthen a much stronger character. The biggest problem with this setup has been its tendency to penalize players for opting out of spending real money. To be fair, many of the same practices are still in place, but this case they aren’t quite as severe. At least not so long as players are patient.

Of course when we get right down to it, Puzzle Trooper is still pretty much the same game we’ve seen several times over now. Only this time with a vaguely “modern warfare” motif, rather than high fantasy or… well, high fantasy. Whether or not this is an issue depends on the individual, but I certainly wouldn’t blame anyone who feels a bit burnt out on the “genre” to give it a pass. The temptation is certainly there.

However, even though Puzzle Trooper is a blatantly obvious clone, it’s a good blatantly obvious clone. One that even manages to do one better than its inspiration by giving players more of a fighting chance if they don’t want to spend oodles of cash. I doubt it’ll convert anyone who’s already thoroughly (and literally) invested in other similar titles, but it’s certainly not a bad place to start.