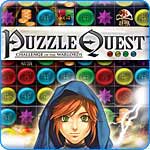 Classical fantasy trappings and detailed role-playing infrastructure aside, Puzzle Quest: Challenge of the Warlords proved a surprise hit on consoles like the Nintendo DS and PlayStation Portable for one simple reason – it’s a casual game at heart. So don’t be so quick to dismiss the outing, just because you’re not the sort who usually appreciates the complexity of Dungeons & Dragons-style romps or balks at the thought of playing swordsman or spellcaster. To do so would in fact be a major stumble, causing you to miss one of the year’s most unsung gems, especially with the tale now available in a specially-enhanced edition for PC owners to enjoy as well.

A mix of might and magic with traditional match-three puzzle gaming mechanics, we’ll spare you the finer points of the epic romp, told through volumes of snappy conversations with dwarves, elves and other mythical colleagues. Suffice it to say you’re out to save a medieval-era land from ruin, and the first step to doing so is choosing a character class: Knight, Druid, Warrior or Wizard, each of whom sports certain strengths and weaknesses. Learning of the need for heroes through several attractive, anime-style cutscenes, you’ll soon set out on a lavishly-decorated world map to solicit quests, collect piles of regular/magical equipment and do battle with an increasingly deadly assortment of foes, from spiders to skeletons, trolls and ogres. While a small area of land and brief selection of hotspots is available to visit at the beginning of the adventure, completing various assignments quickly opens up new realms and destinations to explore, i.e. bridges, ruins and castles.

As if the general setup weren’t ambitious enough, you’re even provided tons of side activities to enjoy. Some missions are optional – go rescue that town or collect that magic artifact at your leisure, knowing it’ll offer experience point-, money- or ability-enhancing boosts, or just continue on with the main story-driven saga. Capture monsters by defeating them in combat and turn them into pets whose powers you can tap. Gain additional party members who’ll lend their talents during combat. Purchase new weapons and pieces of armor that increase your prowess in battle, research additional abilities and spells or build your own citadel.

The only constant throughout is the need to trounce a multitude of nasty beasts that bar the way forward. Thankfully, the more you do so, the more you’ll be able to customize a character using experience points you’ve earned to gain levels. Grow in stature, and you’ll be afforded opportunities to improve your damage-dealing abilities, spell resistance or chances of receiving random bonuses.

Sounds complicated, right? Well, guess again, because the action couldn’t be simpler. Cut to combat, and you’ll see a screen filled with a grid occupied by random objects such as gems of varying color, skulls, coins and score multipliers. Merely match three of any type to remove them from the board and invoke beneficial effects, such as increased green/blue/red/yellow mana, additional cash or life-draining assaults on your opponents. (Note that matching four or more awards you additional turns and huge bonuses.)

The thing is, you’re actively competing against a computer-controlled foe at any given time, whose picture and stats are displayed on the right-hand side of the monitor. And to eliminate them, you need to whittle their health down to zero, which must be accomplished through a mix of cleverness and strategy.

Warning: Computer-controlled adversaries play rough, to say the least. Defeating them may require planning several moves ahead, or setting up huge chain reactions, as players race to match groups of skulls (or even more powerful glowing skulls), which do damage to the other party. Likewise, you’ll also need to collect the right color of mana to power your range of selectable spells and abilities – activated with a click – while actively blocking baddies from doing the same.

Naturally, the presence of on-screen multipliers can make things difficult, as can opponents’ access to unique powers themselves. The constant need to decide whether to send fire bolts shooting at adversaries or bolster your earth resistance on-command, let alone conjure up extra turns or cause baddies to lose moves by sacrificing the chance to potentially strike, presents literally dozens of possibilities at every turn.

Dedicated gaming enthusiasts will, naturally, adore the chess-like nature of the title and near-limitless replay value it presents, especially given this particular edition’s brand new options for LAN/Internet play and enhanced audiovisuals. (Which, we must admit, look spectacular for a sub-$20 offering, especially when you factor in the epic musical score and featured speech samples…)

Options to re-fight any battle at your leisure, even after being ignominiously defeated, also help encourage continued growth and play (especially since you still gain some experience/gold rewards, loss or no) of what’s already one of the deepest, most compelling epics in recent memory.

However, suitable as the offering is for short session, coffee-break-style play, it’s still an order of magnitude grander than the average casual outing, which may confuse at first. Penalties for making a wrong move are especially harsh as well, whether it’s the health point loss subtracted for an errant mouse click or enemies’ crushing responses to your slightest gaffe. (It often feels like baddies can see several turns ahead.) Besides, let’s face it… once you hit a stopping block in the form of an especially tough or regenerating opponent, it can take several long, repetitive play sessions to finally defeat said boss or underling and get oneself back on track.

Regardless, we might as well be frank: Puzzle Quest remains one of the best things we’ve seen on the casual gaming radar to date. You’re highly encouraged to take up arms and see for yourself why, choice of fantastical subject matter notwithstanding, this one’s still a legend in its own right.