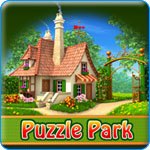 Go on a no-pressure vacation in the match-3 game Puzzle Park, where you’ll pass through spooky castles, take a ride on the railway, spend time in the ice cream shop, gallop through the Wild West, get your fortune told, enjoy delicious and juicy fruit.  All this action happens with no timer and lots of whiz bang bonuses and power-ups.

The game takes place in an amusement park that takes you from one end of the map to the other. The goal for every level is to clear all the tiles and to help the star make its way to the bottom of the grid. The second theme appears after finishing six levels of the first theme. That number climbs throughout the game to the 19 levels on the last theme. Making matches of four or more gives you a dynamite power piece, and the more matches you make in one sitting the stronger the dynamite. Match the bomb with other pieces and stand by for exciting and explosive effects.

Arrow power pieces appear on the grid from time to time that clear rows, columns and diagonal squares creating a chain of smashing effects that have you smiling in awe and taking in the thundering sound effects. Like most match three games, you’ll run into pieces that have a single chain and a double chain requiring you to match them at least two or three times before freeing them. Not only that, but they don’t move so all the pieces surrounding them have to do the hard work.

On top of all this, you can earn points in the bonus progress bar for matching pieces that have a glow around them. A score multiplier also climbs with each match to shoot up your score. That’s not all. When you make enough matches of a certain type, it appears in the bonus area. Once it does, you can use it to turn almost any piece into that type (although it doesn’t work on stars and power ups).

Every level has two bonuses from the “Choose a Bonus” list. You can change the bonuses you’ve earned. These range from a hammer smashing a piece and UFO that selects the next six best moves to spray paint that turns every sprayed piece into the same piece and mystery box that randomly selects a bonus.

With no clock nudging you to work fast, the game tracks all the best scores including highest score, fastest time and most points per second for every level. After walking through the entire amusement park, you can go back and replay any level to better your score. This bumps up the replayability factor. It’s not that challenging; I took first place for almost every level. It’s too bad the game doesn’t sync your high scores over the Internet to challenge you to beat other people’s high scores.

Prizes are available for finishing each theme as well as a wooden, stone, bronze, silver and gold trophy whenever you reach the minimum score. For example, you earn a wooden trophy for collecting 4,000 pieces. Once you do that, the stone trophy requires collecting 10,000 pieces and so on until you earn the gold trophy. One trophy is for playing non-stop, which makes little sense. There’s no way to lose in Puzzle Park. Also, the game doesn’t know how to use punctuation. It uses apostrophes instead of commas in points such as 4’000 and 1’000’000 points. A little annoying. Not every game needs to have a second mode, but Puzzle Park is ripe for one.

Though Puzzle Park has little story and no mini-games in favour of a focus on traveling from place to place, its delightful claymation-style graphics (think Wallace and Gromit), changing themes and many levels will captivate those who love Bejeweled and other match-3 games. It’s also a great game for first-timers to the match three genre, and for families. While the game offers little in the way of originality, gameplay is solid. It doesn’t take a lot of work to play the entire game, yet the charming Puzzle Park should rein you in for the entire trip.

If you liked this game, try Unwell Mel, Fairy Island, and Call of Atlantis.