Puzzle of the Dead Review 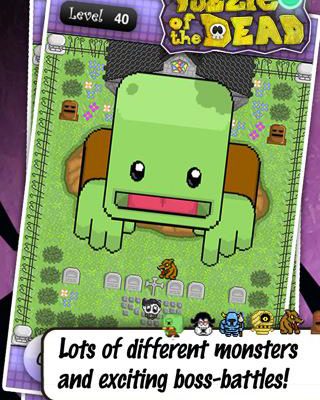 As fun as the puzzles may seem in Puzzle of the Dead, the controls are just as stiff as a zombie

In Puzzle of the Dead, you play as a young lonely boy named Pip who is a bit of an outcast in the world. Pip is in love with a girl named Plum, but she does not love him back because he doesn’t fit in. Desperate to win her love, Pip is confronted by an old witch with a solution to his problem, but she needs dead souls before she will give it to him.

The main gameplay in Puzzle of the Dead is centered on Pip exploring an old cemetery to find these souls, with several obstacles in his way. In some levels you’ll just need to clear a path to the key and exit in the level. As you progress, you’ll come across much more difficult levels that require Pip to block the enemies’ path before being able to progress. In each level there will also be souls you’ll need to collect, but they are usually in your path anyway. Think Bomberman without the bombs. 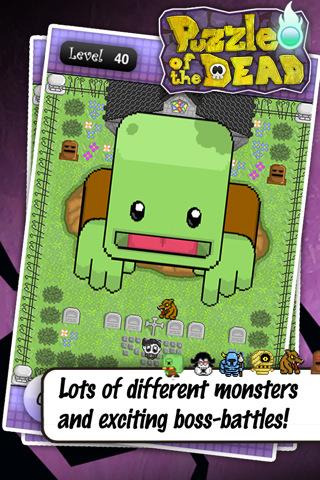 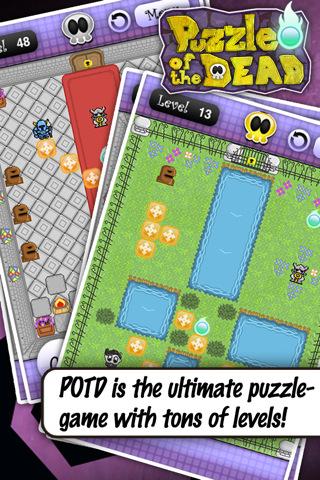 Puzzle of the Dead presents levels in a linear fashion, with each unlocking the next for progression. Having this choice is very welcome to the idea of mobile games, simply because you can start and stop whenever you please and not lose any progress.

Taking me on a trip down memory lane in Puzzle of the Dead are the graphics, which give the game a look of an 8-bit Legend of Zelda with a horror theme.

The main problem with Puzzle of the Dead becomes apparent from the moment you start playing. Being a top-down game with 2D graphics, I never would have guessed that Pip would be this hard to control. To control Pip, you have to place your finger on the screen and move it in the direction you would like him to move. I have seen other games incorporate this same style, but the problem with Puzzle of the Dead is that the movement is incredibly stiff. Simply moving Pip a few squares feels like a chore and as a result, it’s not very fun to play.

As a result of the flawed control system, recommending Puzzle of the Dead is not easy to do. On one end of the spectrum, I could see someone enjoying the game because of the challenging puzzles it presents; however the controls should bother any player that values their blood pressure. During my playtime with Puzzle of the Dead, one too many times I encountered an enemy only to be killed as a result of the stiff controls.

All in all, Puzzle of the Dead should definitely be looked into, but only if you can see yourself becoming accustomed to the control system. For those with little patience, you should definitely look elsewhere.