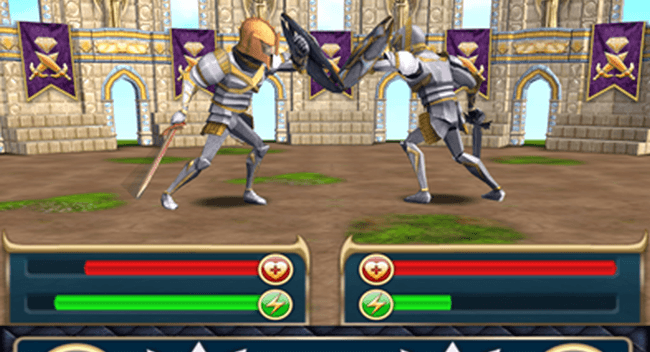 If at first you don’t succeed, it was probably just bad luck

Playing Puzzle Knights is much like buying a pack of cheap hot dogs. At first, you look at the packaging, notice how many hot dogs come to a pack, and you think, “This is a really good idea.” As you take them home and start to make them, you slowly start to think that you may have made a mistake. By the time it’s sitting in a bun, ready to be eaten, you realize that no amount of ketchup can save you now.

Like cheap hot dogs, Puzzle Knights isn’t necessarily a bad idea. Its gameplay is split into two portions: a match-three puzzle game and a rock-paper-scissors type of battle. For the most part, the match-three gameplay is standard fare. You’ll swap the positions of two adjacent gems, making lines of three or more like-colored ones. Clearing four or more gems in one move will occasionally form a power gem, allowing you to clear large amounts of gems quickly. The only slight sense of uniqueness is the turn limit. Each puzzle has a set number of turns to score a set number of points which will influence the other phase of the game.

When you’re done with the puzzle, you’ll enter the combat phase. Combat is the weaker point of Puzzle Knights, due to its lack of hands-on gameplay and a general feeling of pointlessness. When you complete the puzzle, you’ll earn stamina. At the pre-fight screen, you’ll use that stamina to plan your attack.  Each slot of stamina can be filled with one of three options: Attack, Defend, or Counterattack. You’ll simply set the order you wish to perform each action and your knight will do that in battle.

After planning the attack, you’ll be paired with another player’s character. This is where things start to go downhill. Both characters will enter battle and start performing their list of commands in order. The result is like rock-paper-scissors with a little less clarity. “Defend” will occasionally block attacks. “Counterattack” will occasionally counter an attack. Neither option is a guarantee, as attacks will still connect about 50 percent of the time. If both players attack, the result is a bit of a crap shoot, while neither player attacking results in zero damage being dealt. There’s little to no control placed in the player’s hands, and the result is painful.

Puzzle Knights is nearly saved by its level of customization. Using gold earned in-game or purchased, you can unlock new characters and equipment, which will help you in battle. Most of these unlockables simply provide stat boots. A new sword may let you increase more damage, but it hardly affects the gameplay in any meaningful way, as the random gamble of combat is still present.

Puzzle Knights is one of those games that feels like a good idea, but it manages to prove itself otherwise nearly every step of the way. Players looking for an exciting new match-three puzzle game are better off playing just about anything else they can find on the App Store. As for the combat, there’s hardly anything that makes it a worthwhile experience.