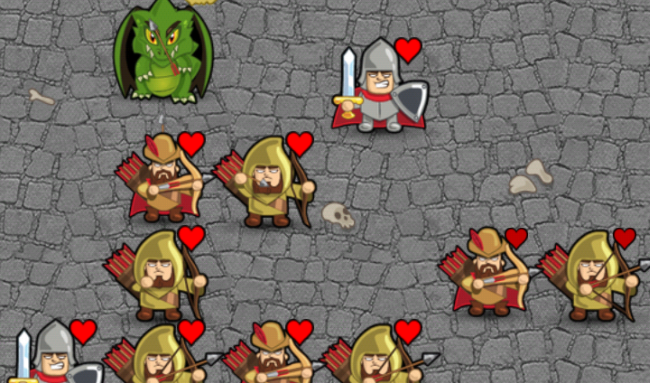 If two game genres ever deserved to be nominated for a “most over-used” designation, it’s match-three and tower defense. Still, the shelf life of stale mechanics can often be extended a bit by creating unexpected combinations as new match-three/tower defense game Puzzle Defense: Dragons has managed to do. While this cute little game isn’t exactly a paragon of innovation, it does offer a generous amount of free-to-play fun.

Puzzle Defense: Dragons has two modes: Campaign and Battle. The significant difference between the two is that the first has combat happen in stages as you progress across a map, and the second has it go on indefinitely (or until you run out of reinforcements). Also, Campaign mode has a weensy bit of implied narrative (re: the dragon attack on your resident kingdom) and gives you five lives/chances to fulfill each level’s objectives. Battle mode on the other hand, is continuous and does away with the story add-ons. 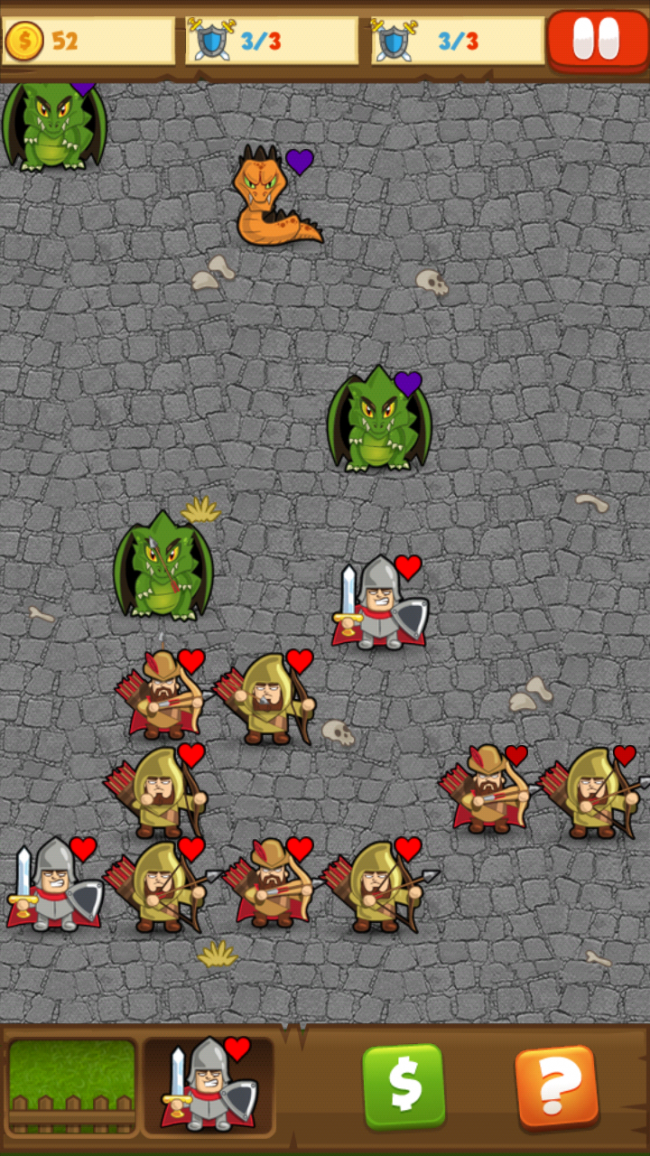 Whichever the mode, the match-three element of Puzzle Defense: Dragons is clever, since rather than having you rearrange existing icons within a grid, it asks you to create matches by placing the icons yourself. In this case, the icons represent different types of military units starting with a basic swordsman (who’s more or less useless) and continuing through more powerful units such as archers, snipers, king’s archers, and heavy crossbowmen.

The idea is to group three or more of the same unit next to one another. This combines the three and transforms them into a single, more powerful unit. The progression of this works in the order listed above—three swordsmen equal one archer, three archers equal one sniper, and so on. The strategic part comes in as you determine where to create these groupings, especially since once placed, units are immovable (in general).

The match-three grid represents a top-down view of your battlefield, and enemies (all manner of dragons) descend upon you from the top of the screen, Space Invaders-style. Like your units, each dragon type has a different attack strength and can take a different amount of damage. They also move at different rates. The idea is to take them out before they get close enough to roast your army with their fiery breath (which is why swordsmen are basically pointless) and/or get past your forces to the bottom of the screen. 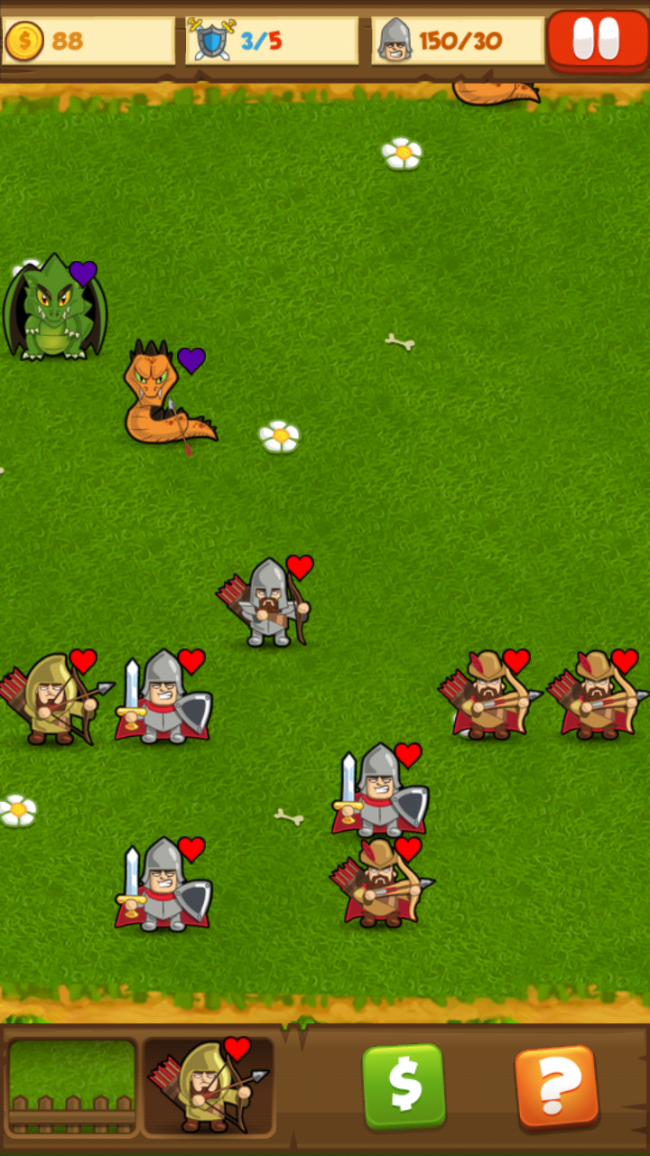 Campaign mode is fun since each level has different objectives or limitations, but it gets difficult very quickly. It’s possible (and necessary) to upgrade your units using coins earned in-game, but since coins are earned so slowly, progression feels fairly dependent on being willed to purchase upgrades with real money. Because of this, Battle mode feels like the friendlier option, since it allows you to continue playing as long as your strategic skills allow you to. In Battle mode, the idea is to defeat wave after wave of increasingly difficult enemies. You earn coins faster in this mode, and can use them during battle to replenish your army. You can also use them to buy power-ups that allow you to do handy things like auto-upgrade units with sorcery or move units across the grid via hot air balloon.

Though Puzzle Defense: Dragons is reasonably entertaining and has nice enough audio-visuals, there are a couple of familiar but annoying aspects of it caused by its free-to-play implementation. First, during Battle mode, a “visit our shop” message pops up again and again and blocks a fourth of the screen. Second, if you make the mistake of matching more than three of the same unit, you lose any units above those three when the new, more powerful unit is created. Third, in Campaign mode, you’re stuck looking at ads for other games in between levels unless you pay to make them go away. (Incidentally, coins are available at the rate of $1.99 for 4,400 and all the way up to $49.99 for 210,000.) 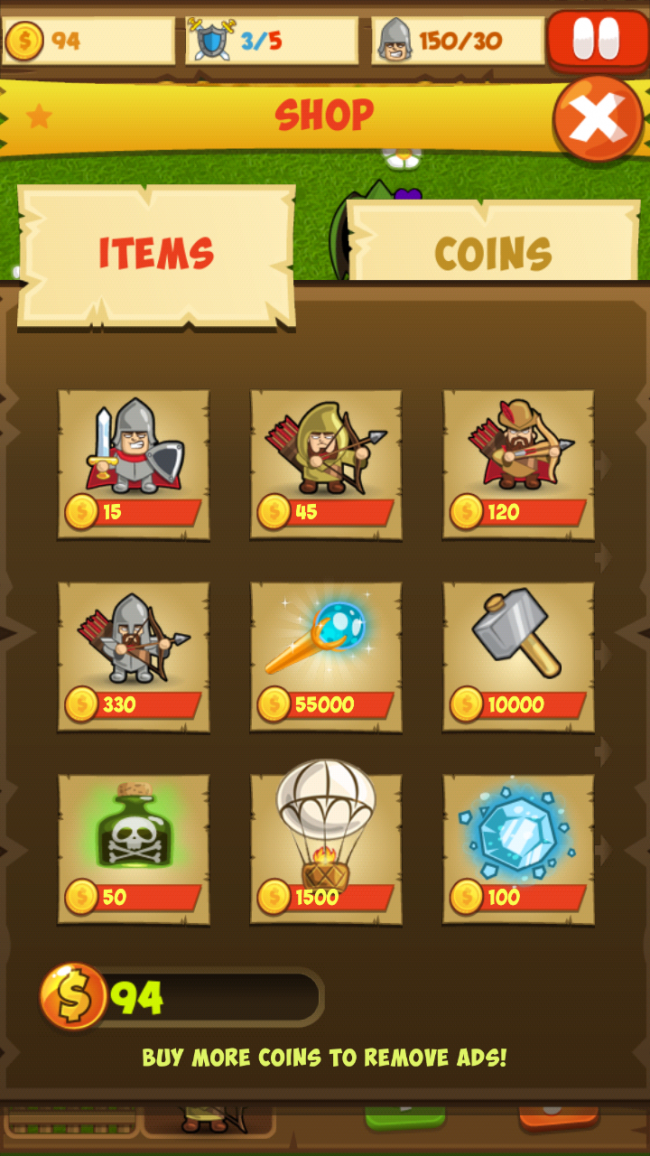 Puzzle Defense: Dragons inflicts on players the inconveniences so typical of the free-to-play business model, but still manages to be fun. It’s simple but challenging, looks and sounds good, and offers a generous amount of free play to gamers with fast reflexes and good strategic instincts.