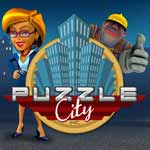 Call it a great two-for-one deal: All-new brainteaser Puzzle City combines the best that construction sims and head-scratching mindbenders have to offer into a single, spectacular outing – and in a way that’s completely original and innovative to boot. The upshot being, of course, that if you’re as much aspiring tycoon as lover of logic-driven conundrums, you’ll find plenty to admire in its simple, yet addictive mix of civil engineering.

Granted, some may be frustrated by the amount of time it can take to find you’ve painted yourself into a corner, and overall level of randomness involved with play. Be that as it may, we remain supremely confident that most will want to pay this virtual burg a visit.

Congratulations – you’ve been recruited by Mz. Towers, the sharply dressed, bespectacled, no-nonsense CEO of Puzzle City, Inc. as the company’s new construction manager. Its mission: Turn various landscapes ranging from grassy plains to barren deserts into a thriving habitat where citizens from across all corners of the globe will flock to lay down roots. But first things first; at each of the various individual levels into which every stage/thematic area is divided, you’ve literally got to build a metropolis from the ground up. Thankfully, courtesy of a simple, point-and-click interface and intuitive base game mechanic, it takes just seconds to dive in and begin erecting shopping centers, factories and even school campuses.

Basically, a static backdrop – constantly crisscrossed by planes, helicopters and the occasional UFO to add a sense of charm and dynamism – serves as the playfield for any encounter. Featured upon it are individual, standalone sections divided into grids of squares, which are observed from an overhead view. Some will be nondescript, others highlighted by color coding (meaning only certain types of structure can be built upon them).

To construct a city, you’ll simply click on varyingly-hued and -shaped groups of blocks (each of which corresponds to a specific type of building) that scroll by on a conveyor belt below, and then place them wherever there’s room on the board. While different structures such as police stations and residences can be placed next to one another with no penalty, the more of any one type you erect beside existing buildings of the same sort, the more power-ups you get.

Consider it a bonus, as you’ve only got so much time to empty the conveyor belt before it fills and results in system failure, causing you to restart the level. Besides, given that winning any given scenario also involves meeting multiple and increasingly difficult criteria – e.g. create a 3×3 residential area, fill all highlighted squares, cover 50% of the board in new construction, etc. – you’ll need all the help you can get.

While a straightforward game, Puzzle City is by no means easy, with difficulty ramping up sharply just minutes into the adventure. On the bright side, you have ample options to help buy yourself time and room to maneuver, like a trash can for throwing out unwanted pieces, a recycling bin for turning them into more useful blocks and a bulldozer that demolishes unwanted buildings. Then again, you’ve always got to think several steps ahead, or keep several dynamite (destroys all blocks on the conveyor) and shatter (breaks blocks down from larger L- or plus-shaped groupings into single squares) power-ups handy if you want to survive.

It’s an issue that’s only further underscored by the title’s overall randomness, one of its admittedly few downsides. Sometimes you get the shapes you want and things go smoothly. Others, you’ll spend strained minutes carefully placing pieces just so, only to find your painstakingly-laid plans ruined by an unexpected string of unwanted parts. Occasional frustrating moments aside though, production values are so amazingly high – love the all-American visual style, lively cast of characters and toe-tapping, jazzy soundtrack – that you can’t help but enjoy yourself. Between your foreman’s goofy comments, ships which sail by in the distance and attractive buildings that are assembled and come to life right before your eyes, it’s hard not to fall under the outing’s catchy spell.

By no means a classic, but still pretty darn catchy, we’ll say this about Puzzle City – the franchise has room to grow. Keep your fingers crossed for more soon… and don’t hesitate to give the current outing a spin in the meantime.