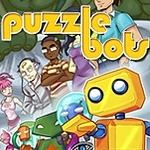 Who wouldn’t want an adorable little robot of their own? Thankfully, Dr. Hugo’s Factory for Making Robots is here to help. The company makes cute little mechanical companions of all sorts, from robotic mermaids to walking flamethrowers. But something is not quite right with Dr. Hugo, so the robots take it upon themselves to find out just what’s going on. In Wadjet Eye’s Puzzle Bots you’ll get to control a gang of five robots as they search the factory, solving puzzles and getting into trouble. The result is an incredibly charming adventure, packed with plenty of humor and some deviously clever puzzles.

The strange thing about Dr. Hugo’s Factory for Making Robots is that, aside from Dr. Hugo himself, there are only five employees. And each one of these young inventors has built exactly one robot. When one the inventors stumbles upon a mysterious metal box that can’t be opened, the robot team decides to sneak out to try and open it themselves. They end up uncovering a devious plot threatening the whole company, involving hidden cameras, lost toys, and lots of lasers. The game features a uniquely charming sense of humor, especially when it comes to the goofy cast of characters, both human and robotic. You’ll come across numerous, hilarious geek references, and the dialog is as silly as it is endearing.

Thankfully, Puzzle Bots has much more going for it than just its goofy sense of humor. The game plays out a lot like a traditional adventure game, but with a heavy emphasis on puzzle solving. You’ll be controlling all five robots — who are introduced one at a time at the beginning of the game — and each has a different ability. Hero, for example, is the only robot who can pick up objects, while Ultraboy bears a striking resemblance to a bulldozer, and thus can push heavy items around. Most of the puzzle will require you to utilize all of the different abilities of your robot team in order to find the right answer.

For the most part the puzzles aren’t too difficult, but they do require you to pay close attention to your surroundings and make use of all of the abilities at your disposal. There is a recharging hint system in place as well, which doesn’t tell you exactly what to do, but instead provides subtle (and sometimes not so subtle) tips to push you in the right direction. Unfortunately, there are a few hair-pulling moments of frustration, where it’ll take some time to figure out exactly what you’re supposed to do. In these instances it’s usually easy to figure out what needs to be done, but figuring out how to do it is another thing entirely.

A lot of what makes the game so charming simply boils down to the fact that everything is so small. Since you’re viewing the world from the perspective of the robots, who themselves are

about the size of a small rodent, even everyday objects appear huge and daunting. They also take on new functions. A coffee maker becomes a spaceship, while a book can become a bridge. The robots are also delightfully clueless when it comes to humans. When two of the main characters kiss for the first time, one robot remarks “maybe they’re doing battle.”

Further emphasizing the game’s undeniable charm, is its wonderful, cartoon visual style. Puzzle Bots looks like a playable Nickelodeon show, with bright colors and a delightful, hand-drawn style. As a bonus, you’ll also get to see some gorgeous posters of each of the five robots created by superbly talented artists like Harvey James and David Hellman. And you can also collect special hidden items throughout the game, which give you access to solid amount of interesting concept art. It should also be noted that Puzzle Bots has some great voice acting, as the spoken dialog really helps add to the game’s humor and lend some personality to the characters. The robots, in particular, sound adorable, communicating via a series of R2-D2 style beeps and boops.

There are a few technical problems that you’ll experience throughout the game, though they’re mostly minor. The animation is a little wonky at times, which is frustrating given the game’s cartoon style presentation. And occasionally the music will skip, which tends to happen mostly when the game is shifting scenes. Thankfully, these aspects are pretty easy to ignore and don’t do much to detract from the overall experience.

Puzzle Bots is both light-hearted and challenging and features one of the rarest of videogame characteristics: a great sense of humor. It’s the kind of game that will have you smiling almost the entire time you’re playing. The story is silly but well written, and the puzzles are challenging and only occasionally frustrating. It’s hard to ask for much more from an adventure game, except, maybe, for a little robot of your own.