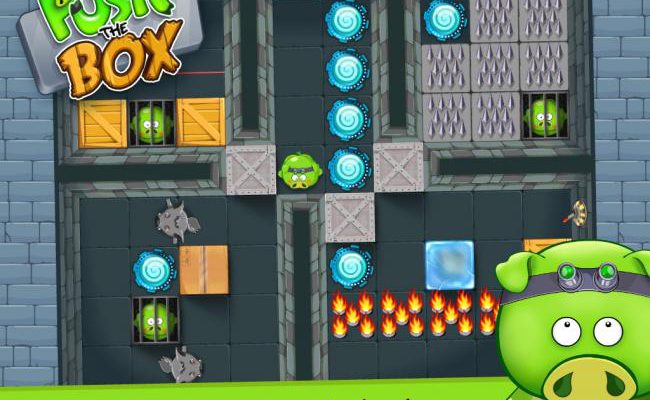 The easiest-to-follow imperative since “Play the Game.”

It’s been a strangely amicable few years for green pigs: in 2012, we helped the previously-villainous Angry Birds antagonists build contraptions in Bad Piggies.  Now in 2013, we’re helping to rescue what I can only assume are their distant relatives (how many breeds of green pig can there be?) in Push the Box.  Next you’ll be telling me green eggs and ham are off the menu.

Push the Box begins, like a surprising number of games, with a kidnapping.  The Three Little Pigs have been abducted by their crotchety wolf neighbors, and only their cousin, Oink-oink, can save them.  Luckily, Oink-oink hails from the city and brings a set of box-pushing street smarts—as well as what appear to be night vision goggles—with him.

Each room of the wolves’ lair contains plenty of boxes, an increasing number of traps, and the three pigs themselves, stuck in cages.  Oink-oink will need to navigate these rooms, rescue his cousins from each, and then exit the door to proceed onward.  True to the title and classic sokoban gameplay, Oink-oink can push these boxes but not pull them.  This allows paths through the rooms to be opened up, but also accidentally blocked off by a poorly planned push.

Although Push the Box begins with nothing but boxes delaying your rescue attempt, it quickly introduces additional hazards in each room that must be avoided or dealt with.  Spiked floors, trap tiles, open flames, heavy metal boxes, and wolf guards will appear as you progress, shifting the focus of the game from strictly puzzle-solving to a more fast-paced arcade experience, vaguely reminiscent of The Adventures of Lolo.  Oink-oink will still need to maneuver boxes, but just as often he will be dodging spikes and hiding from wolves.  To help with these additional challenges, even more items are introduced, including ice blocks for putting out fires, grip gloves for pushing metal boxes, and cardboard boxes (à la Metal Gear Solid) that Oink-oink can hide inside.

Despite all the hazards and pickups that quickly become available, each level of Push the Box is cleverly planned out and never overwhelming in its requirements.  Many rooms feature a specific hazard or two—like lots of fires to put out or wolves with extensive guard patrols—to help you focus on the solution at hand.  Later levels add a lever that must be flipped to open the exit door, adding another specific goal to each room.  Because of this focus, stages are never too challenging, and achieving three stars (by saving all three pigs in the room) is fairly straightforward. 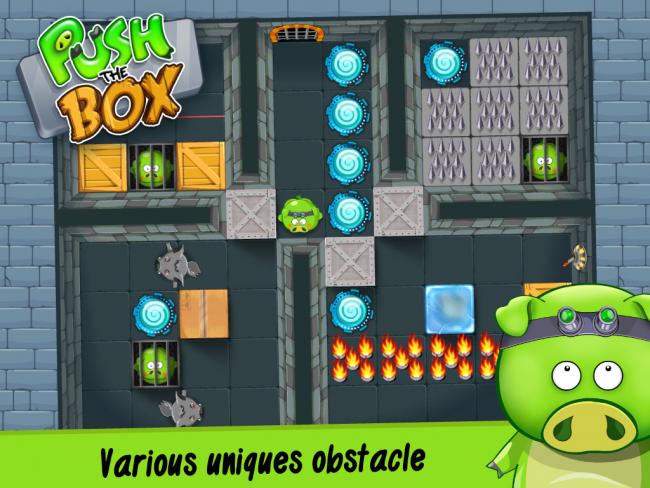 This is my biggest complaint about Push the Box: its difficulty, or lack thereof.  Oink-oink is often spawned without any choice of how to proceed—there will be one movable box next to him, which is obviously where you’ll need to start.  Even some later levels are surprisingly simple, with spikes and traps that are laid out but never come into play, or open rooms that focus more on avoiding wolves than solving any sort of puzzle.  This would be acceptable if the difficulty was consistent and the game could be labeled as a kids’ title, but there are also rooms that require critical thinking and planning ahead, more suitable to an adult sokoban game.

This means it’s a game best played with your kids, as a team.  Or on your own if you’d like a laid-back, less challenging puzzle experience.  Either way it’s still extremely enjoyable, especially once you reach higher levels and are forced to deal with a combination of challenges and pitfalls that await Oink-oink.

Push the Box is at its best when it combines its arcade action with deducible tricks, like in level 21—this room is full of rows of moving spikes and boxes, most of which can be ran past with the right timing.  The last row, however, is too long to run through before the spikes pop up.  In this instance, Oink-oink needs to move a box above that row for a safe haven before continuing on.  This type of level challenges your speed and wits, and makes completion feel like a dual victory.

In the end, Push the Box is also a dual victory: a cute, family-friendly game with interesting (albeit easy) and engaging puzzle design.  A game worth playing, with piggies worth saving.