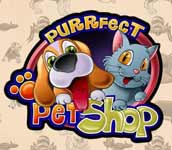 And the pet games keep coming. Game developers must think those sweet animals will urge casual gamers everywhere to play. The time management game Purrfect Pet Shop combines caring for the cuties in an animal shelter with matching them to the right owners.

Purrfect Pet Shop resembles Paradise Pet Salon in that they involve feeding, providing medical care, and bathing the animals. Each day you take in pets and prepare them for adoption by bathing them, vaccinating them and feeding them. Customers arrive with a certain kind of pet in mind that they want to adopt, and you match the animals to their requests. You must rely on your powers of “dogtecting” to figure out what animal each customer wants. Customers provide one characteristic of the pet they want (such as fur color or size). If that isn’t enough, you can click an icon in the customer’s thought bubble to reveal another characteristic (customers request up to four traits).

Sometimes it’s difficult to tell traits apart. The animal size icon looks like a T (or a flat line for the tiny ones) and the icons for a small and medium animal look too similar. This is also a problem with colors – especially the brown and orange families. Seeing the needs of those animals in the far left display proves tricky as their icons blend with the customer.

Stacks of dollar bills act as customers’ tail wagging meter. The stack shrinks when customers wait too long, you make a mistake with their orders, or don’t give them a completely happy pet (in other words, one that is still dirty, hungry, or sick). Pets need to be as happy as possible to earn the full tip. Those giving pitiful looks indicate they need care.

Sofia and Peter, the pet caretakers, have a tendency to block the view of some stations so that you can’t tell when the animals using the stations finish. Although animals reappearing in their cages is a way to know they’re finished with the station, having a blocked view irritates.

Clicking animals, stations, and owners doesn’t always take. You think you’re putting the cat in the tub when a big “NO” appears over one of the owners indicating you are trying to connect the owner with the cat. Clicking can start to feel like hard work, and between taking care of the animals quickly and meeting customer needs, it gets a little dicey

Though the game comes in one mode, it has four difficulty levels: Kiddies, Junior, Normal, and Hard. The lower levels offer more lives and upgrades are available sooner. Help does not explain the differences in the difficulties so play them and figure it out. Purrfect Pet Shop contains 60 levels and after 20+ levels – the game isn’t much harder than the early levels. It would be nice if Sofia and Peter would move faster.

A black and white checkered flag indicates the amount of money needed to advance, and it only takes a round or two of pet care to surpass the goal. As you purrgress through the levels, you also move up ranks beginning with 1 – in the Dog House to 48 – the Dog’s Tuxedo and beyond.

You not only choose Sofia or Peter as the pet caretaker, but also pick your own dog or cat. Select the gender, the color of its fur and eyes, and name the animal. The specially picked pet appears throughout the game and takes on the star role in the mini-game. While this feature is original, all the the animals look the same except for size and color.

The mini-game involves taking care of your special animal and purrparing him or her for adoption. The bottom of the screen shows all of the special animal’s needs and you simply click on the items to meet those needs. It won’t challenge most players – even pre-schoolers comfortable with computers could probably handle it at a slower pace.

The adoption meter fills up and yet many levels later, the game hasn’t put up the special pet for adoption. What’s the point of this mini-game? In clicking the different items to take care of the special pet, little happens. The newspaper and toys just fly in the air and fall back down. Food and drink disappear and fill back up.

Bathing is the only real action in which the animal disappears under a big bowl of bubbles. The big heart on top of the special pet with a sad face purrplexes considering the full column of hearts – an indicator the animal is happy go-lucky. One new item disappeared and came back a few levels later (had to buy it both times, too).

Some will get a kick out of the taking a picture of the special animal feature. Photos can be close ups or show the whole room. Frames can also change color and design and captions added to the larger pictures (not available for close-ups). You can email photos straight from the game or save them to your hard drive.

One grrreat thing about the game comes in the added animals and colors in later levels. Huskies originally come in gray, but brown ones show up later. Purrfect Pet Shop begins with dogs and cats, slowly adding different types of dogs and cats, rodents and snakes. In spite of the impurrfections, Purrfect Pet Shop offers long-lasting, family-friendly gameplay and music that gets you dancing in your seat.