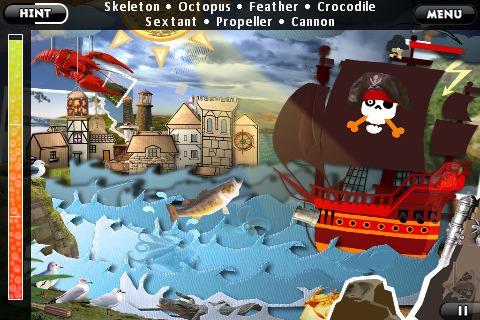 When we first reviewed the PC version of Pure Hidden, we were absolutely glowing. “A gem of a game,” we called it, and it wasn’t hard to see why. Blending outstanding art with a seemingly endless variety of gameplay, it was easily one of the best hidden object games of 2009. Now OUAT Entertainment has brought that experience to the iPhone.

The portable version of Pure Hidden offers up 3 modes of play: traditional, find, and spot the difference. Traditional plays like you’re average HOG, as you’ll be looking for different items hidden in the scenery. Some will be part of the original image, some will be hiding behind others, and some with be blended in with other objects making them harder to discern.

‘Find’ gameplay is similar to traditional, only you’ll be tasked with finding so many of a certain object. 7 stars, for example. It’s a simple twist, but it certainly makes for an interesting shift in focus. ‘Spot the difference’ should also be familiar to many HOG veterans, as you’ll see two scenes side by side and need to find the tiny differences between the two pictures. The picture on the left has a hot dog blended into the couch while the one on the right doesn’t – that sort of thing.

As you make your way through each traditional, find, and spot stage, you’ll earn stars depending on your performance. Finish a stage to earn one star, finish it quickly to earn another, finish it without hints for another, and so on. Once you’ve collected five stars (which shouldn’t take you more than a few stages) you’ll unlock the scoring level. The scoring level plays out like the traditional mode, only you’ll be given one item to search for at a time, and rather than being blended into the scenery all of the items will be in a big messy pile in the center of the screen.

The game offers more than 150 stages, and when you combine that with the countless times you’ll be trying to beat your best score in the scoring level, there’s no question that Pure Hidden is a fairly sizable offering. 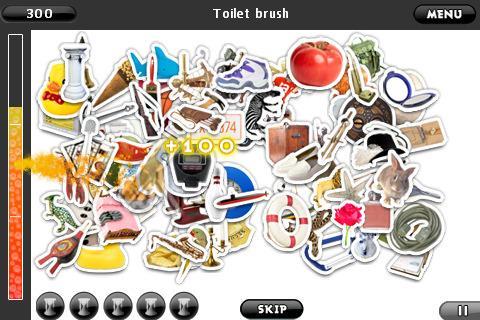 Still, the game isn’t without its problems. The idea of an iPhone HOG is a challenging one. Hidden objects are meant to be small and hard to find by their very nature, but when you put them on a 3.5″ screen it can be next to impossible. OUAT Entertainment have found a simple way around that, letting you zoom with a simple double tap. The problem? The game penalizes you for using this, as you’ll lose a potential star if you need to zoom. Even worse, it’s far too easy to zoom by accident when trying to click on an object, forcing you to lose the star when you’re trying so hard not to.

Veterans may also be disappointed to see that a good deal of what made the original game so great simply doesn’t exist in the portable version. Mini-games didn’t make the cut, nor did the items you’d need to earn to open more stages. While still an enjoyable experience, the portable version of Pure Hidden is unquestionably inferior to its PC counterpart, resulting in a game that feels more like a traditional HOG than its whimsical predecessor did.

It wasn’t without its flaws, and it doesn’t offer the variety that the PC version did, but Pure Hidden still manages to pack an exceptional amount of gameplay into a reasonably priced package while maintaining the charm and appeal of the original. If you enjoy hidden object hunts and you love wildly varying art styles, you’ll find Pure Hidden on the iPhone to be both a good time and a great value.

Masquerade Mysteries: The Case of the Copycat Curator Review