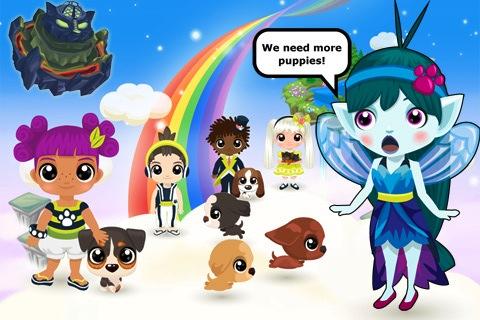 Puppy World may just be a little too cute

Puppy World is a game that tries to overwhelm you with sheer cuteness. When a tiny little pup looks at you with its impossibly large eyes it’s a hard game to dislike, unless you’re some sort of monster. But when you get right down to it, the puppy raising mechanic isn’t all that different from what you’ll find in other social games, whether they’re about farming or raising animals or whatever. It’s still an enjoyable, if unremarkable, game, but it relies a little too much on cuddly looking puppies.

Strangely, Puppy World actually has a story. Sort of. The titular puppy world — which appears to be a chain of floating islands set amongst a backdrop of picturesque waterfalls and twisting rainbows — is under attack and there’s only one way to save it: puppy power! So how do you get puppy power? Well, not by shoveling dogs into a furnace like in an episode of The Simpsons. Instead, you’ll simply be raising puppies to get them ready to be adopted. And once you manage to unite a puppy with an owner — each of which looks like a previously unknown character from Rainbow Brite — the power of puppies grows strong, thus warding off evil.

It’s a unique premise for sure, but in practice it’s pretty standard fare. You buy puppies, wait the predetermined amount of time for them to mature, and then take care of them by feeding, petting, and cleaning them. Once they’ve reached a satisfactory level of happiness, and provided you can sum up the will power to part with them, you can then sell off your dog for money and experience points, which can then be put towards purchasing and unlocking more dogs and decorative items.

There’s a quest system to keep you moving along, but it has its issues. If you perform an action before receiving a quest, for instance, it won’t count towards completing the quest. There are also quests that rely far too much on chance, which means you’ll be spending plenty of time waiting around for things to happen. For example, a quest may ask you to pet a certain number of dogs. But the thing is, you can’t just pet a dog, a dog has to ask you to pet it, and you never know when that’ll be. This can get annoying. 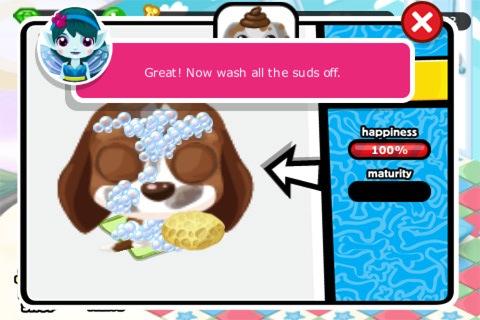 But at least the dogs are plenty cute. Maybe a little too cute. When you first add a new puppy to your collection they’ll be nothing more than a tiny little snoozing mass of adorableness, but once mature the dogs take on new levels of anime-inspired cute. Teeny little bodies, giant heads, and oversized eyes that will warm your heart and make you wish you could just keep the puppy forever and ever. Although there is a relatively large range of different breeds to buy and unlock, the visual style remains consistent: a shih tzu is equally as cuddly as a bulldog or a pug.

But the cute graphics can only mask so much, as the game beneath them is decidedly average. There’s not really a whole lot to do in Puppy World and the stuff you can do isn’t very original. It’s not bad, necessarily, but the gameplay leaves much to be desired. But once you look into a watering pair of puppy dog eyes, you might not be able to stop yourself from playing.