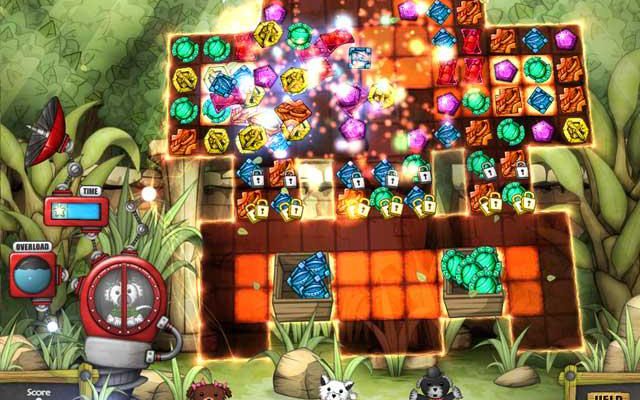 Use your match-three skills to save cuddly puppies from alien abduction!

OK, I’ll admit it. Upon firing up Puppy Sanctuary, I grimaced in anticipation of a game I expected would be shallow, short and unbearably saturated with saccharine cuteness. What I didn’t see coming was a well-crafted game defined not by schmaltzy sweetness but by a winning combination made up of an entertaining pet sim and challenging match-3 gameplay.

Puppy Sanctuary starts with a silly intro where a sad little puppy riding what looks like a space-age hovercraft welcomes you (via charming, English-accented voiceover piped through mechanical speakers) to Puppy Island. This high-tech canine then informs you that you’ve arrived just in time to save the island’s inhabitants from a group of pesky, pup-napping aliens. Your mission (should you choose to accept it) is to rescue the little guys from their cruel, alien captors and relocate them to custom sanctuaries. 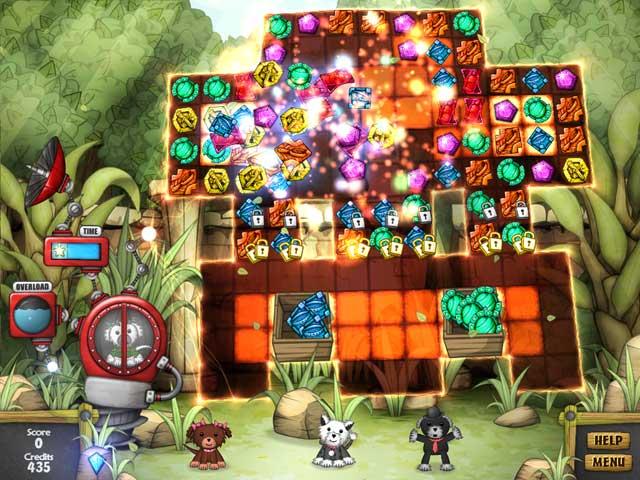 Pet sim gamers will enjoy the sim part of the game, although for die-hard sim enthusiasts, it might feel a touch thin. As puppies are rescued, they’re put into open clearings. There, you can buy toys—like bones, balls, radios and mechanical postmen—to keep them busy and can also purchase fun decorations—like trampolines, balloons and disco balls—to keep them happy. You can name them, brush them, wash them, give them treats and do whatever else it takes to keep smiles on their furry little faces.

More engaging than the sim part of the game though, is the light-hearted match-three portion. In many ways the match-three play will be familiar to fans of the genre, but the challenge of it is raised here by the implementation of different-shaped maps, locked gems and obstructive baskets. An overload meter slowly fills as you match gems, which when full, can be used to explode a single area of the map. Non-square maps in particular, make getting those last matches quite difficult and force you to plan more, build the overload meter up more quickly or be more creative. In between match-three levels, there are simple hidden object sequences that allow you to look for puppy supplies and marble-popper-like sequences where you defeat a hovering alien by shooting at a slowly descending wall of gems. 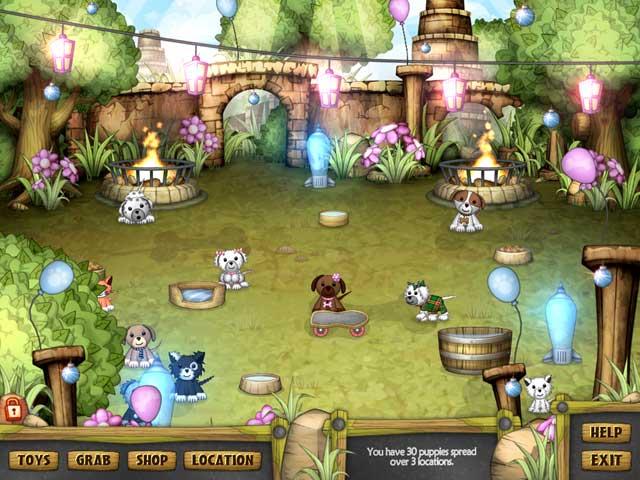 These all represent the good number of positives to Puppy Sanctuary and really, there aren’t many negatives. The graphics are colorful and cute, the match-three play is challenging, the pacing is good and with a total of 80 different levels, you’re good for hours upon hours of entertainment. If anything could stand some improvement, it’s the game’s ending which feels a bit unfinished. Also, throughout the game there’s an obvious lack of what you might call an “ultimate goal”. There’s no reward for saving all the puppies, no dramatic scene where you drive the aliens out, no cool unlockable that you get upon finishing the game. This, coupled with the game’s unsatisfying ending, could make you wonder why you’ve spent so many hours playing it.

Despite these issues, and despite its borderline too-cute presentation, Puppy Sanctuary is an entertaining and challenging match-three/pet sim hybrid. Though thin on story, it offers a smorgasbord of gameplay hand-picked from the most popular casual genres and the result is a mixture that’s highly habit-forming.