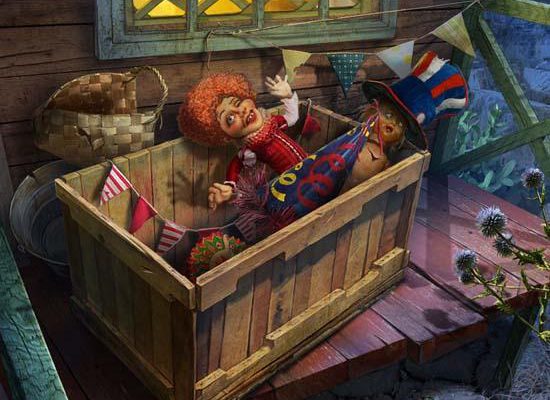 A scared little girl, an evil madwoman, and lots of creepy puppets.

As the detective in the PuppetShow series of hidden object games, you never seem to get the kind of cases that take you to sunny beaches or tropical hideaways. Instead, in Lost Town, you’re once again tiptoeing through creepy wind-up automatons as you try to locate a little girl before she falls prey to the evil Felicia’s scheme to make herself young again.

If you haven’t played the other games in the PuppetShow series (Mystery of Joyville and Souls of the Innocent), you might want to hold off on Lost Town and run through them, not only because it’ll catch you up on Felicia’s mad desire to hang on to youth and the steampunky puppets that seem to follow in her wake, but also because like Lost Town, they’re excellent examples of the genre. 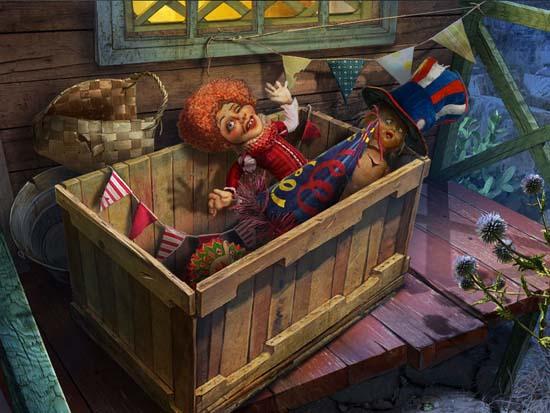 If you’re already familiar with the puppets, you’ll instantly recognize the franchise’s trademark spooky atmosphere, stunning artwork, and pitch-perfect music. Lost Town sets you in a run-down mining town with nothing but some broken down puppets and a single dead body to keep you company. The puppets themselves are sometimes disturbing, at other times endearing, but always interesting. The puppet locked in a bird cage, tears streaming down her porcelain face is not something you’ll shake off quickly, but the clockwork dog barking after the windup cat is sure to produce a chuckle or two.

The town itself isn’t all that large, so you’ll spend much of your playtime retracing your steps, revisiting the same locations several times. Close inspection of your surroundings will sometimes yield a useful item; hidden object sequences produce the other tools you’ll need to track down Felicia. Each hidden object sequence provides you with a laundry list of items to find, with certain items called out in pink letters to let you know that you’ll have to do a little extra work – such as pulling back a curtain or opening a drawer – to find them. One tiny detail you may miss, but is worth appreciating, is that though you’ll revisit areas for hidden object searches, the locations don’t completely reset. If you smash open a piggy bank to get at a coin the first time through, the piggy will stay smashed when you return. It doesn’t affect your new search, but it’s a nice reminder that you are having an impact on the world around you. 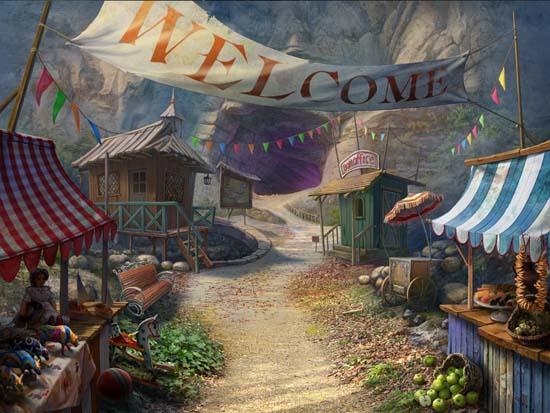 You’ll use the goodies you obtain to solve the puzzles of Lost Town, some of which are environmental – hmm, however will you reach that high window? – and some of which are actual puzzles. All of the brain-teasers in Lost Town are well crafted, gorgeous, challenging, and skippable, should you not feel like fiddling with gears at that precise moment. A handy help button clues you in on your goal for each puzzle, but hold off on hitting it as long as you can; sometimes, just figuring out what you’re meant to do is an enjoyable stumper in and of itself. Although Lost Town revisits some classic puzzles, it also comes at you with some fresh and wonderfully bizarre tests, including a sheep shearing machine and a bank of lights that require you to play a sort of reverse Minesweeper.

Where Lost Town stumbles is its over-reliance on backtracking which sometimes leads to absurd logic. Ok, granted, logic doesn’t have much place in a town where everything from the general store to the blacksmith is run by wind-up dolls, but I really can’t pick up the revolver until I find some bullets? Really? No sooner have you started gathering momentum and really started getting into the game’s excellent story, then you’re forced to turn around and trek clear across town to pick up some trinket. In many cases, that’s all the trip is – a run back to some far-off spot for one brief objective, then back to what you were doing. While the individual tasks themselves are enjoyable, having to do so much back and forth in between rapidly grows tiresome.

The overall quality of PuppetShow: Lost Town is so high, though, that it’s easy to forgive a bit of backtracking. (Ok, a LOT of backtracking.) The ending feels a bit abrupt, but the Collector’s Edition continues the story and lets you into some locations that you couldn’t reach during the main game. Definitely pick this one up (and the other PuppetShow games, if you haven’t already), but one last word of advice: If you don’t know what a lorgnette is, find out before you play. You’re going to be looking for a lot of them.