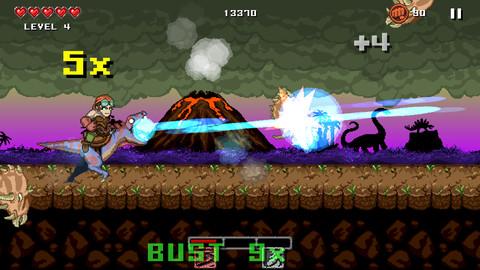 It could be argued that the endless runner genre needs a bit of a kick in the pants, replete as it is with familiar mechanics and predictable power-ups. Rocketcat Games and developer Madgarden have most definitely gotten the memo though, and they’ve decided instead to give it a punch in the face. A glorious, glorious punch in the face.

Punch Quest is what an endless runner would look like if you threw it into a time machine, spat it out in the early 1990s, and put it on an SNES cartridge. This goes well beyond the (masterful) 16-bit graphics to the ethos of the game itself. Your character is the prototypical brawler ripped partially out of Double Dragon and partially out of Rocky, tearing through torch-lit dungeons filled with skeletons, orcs, imps, dark mages, treasure chests and totems.

A casual glance at the background reveals a space-age sky dotted with patrolling UFOs…but don’t take too long a look, as you’ll miss the chance to break open a mystery egg and ride a lazer-spitting dinosaur into battle. Because at that point, why not? None of it should fit together, but that’s precisely why it does; this is a game whose setting isn’t so much a place as it is all the empowering gaming moments from your childhood.

Luckily, Punch Quest doesn’t spend too much time waxing nostalgic. The emphasis here isn’t on stopping to smell the flowers, but rather stomping over them as you barrel your way through baddies. Like any endless runner, you’re constantly on the move, but Rocketcat and Madgarden question the core assumption that obstacles are things to be avoided. The right side of the screen operates your trusty, run of the mill fist-to-the-face, the left icon triggers a soaring uppercut that doubles as a jump, and pressing them both blocks incoming projectiles. You couldn’t ask for smoother execution here. Forward punching acts as both dash and instrument of pain; uppercuts clear away air traffic while sending you to new pathways and platforms. One chains into the other with ease, making the whole experience feel exactly as intended: like a non-stop brawl.

As with its premise, the variety in Punch Quest is absurd. On a scale of one ten here, we’re talking bananas. The key is the game’s system of special powers, which can be purchased with coins earned throughout a run. Each one is separated into one of three tiers, and you’re able to equip one power per tier at any given time. Thereafter, ‘turning one on’ depends on punching your way through enough goons to fill up the power’s meter. For example, your first meter may activate “Bull Rush” blocks that replace defence with angry charges; make it to your second meter to move from uppercuts into mid-air power slams; and fill your third meter to say hello to “Deathsplosions,” a move that turns downed enemies into ticking bombs.

These are just three examples of more than ten in each category; the combinations number in the hundreds, allowing for a sense of strategy you just don’t see in other runners. The game’s many missions will see you cycling through almost all powers at one point or another, but Rocketcat and Madgarden add massive longevity by allowing players the ability to craft unique play styles all their own. As with Jetpack Joyride, all of the added variety is external; none of it adds to the input system, allowing you to feel as if you’re expertly juggling combo moves and pulling off epic attacks without any added effort.

Speaking of external variety, Punch Quest has it for days. And weeks. And months. Think you’re macho? Forked paths will skulls will lead you to boss fights reminiscent of games like Pocky and Rocky. That dinosaur I mentioned earlier? It joins a reckless gnome as one of two “mounts” which lead you to themed mini-sections full of special powers and total destruction. For antiquities collectors, the the game’s stable of totems will have you trying to make split second decisions amidst the fray to jump up high and time punches perfectly in order knock themdown and add them to your collection. Bonus points for clever homages to titles like Tiny Tower and Temple Run. 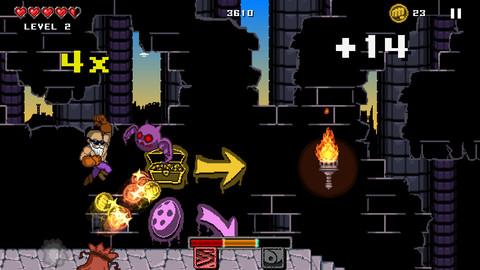 More an aesthete? Then enjoy Rocketcat’s patented array of character hats; it’s back, and joined by a veritable cornucopia of faces and facial hair. And all of it organized with total respect; add-ons are completely supplementary, play sessions earn a massive amount of coins, and a dollar nabs you a hefty purse of coin. Developers listen up: this is your study in how to keep players coming back for more without holding their wallets hostage.

Oh, and did I mention the game itself was free? Believe me…put this on your device right now. You’ll be pleased as punch.