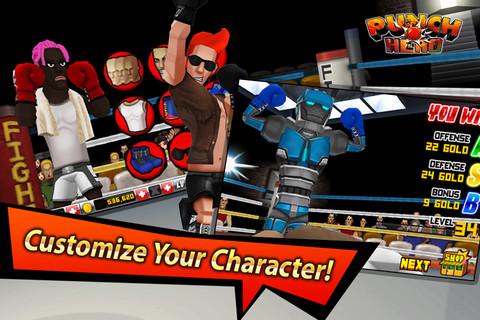 Punch Hero isn’t fantastic, but it’s better than a punch to the groin

Ah, boxing. The grunts of modern gladiators, the smack of blood hitting the canvas, the crunch of breaking cartilage—will not be found in Punch Hero for iOS. Gamevil’s boxing title doesn’t offer a very serious take on the sport, but it also doesn’t wallow in the goofy, simple fun that was achieved by Nintendo’s Punch-Out!! a full 28 years ago. The constant hocking of in-app purchases doesn’t exactly lend the game a sporting atmosphere, either.

You begin your quest for bare-fisted glory by assembling your very own fighter to take all those nasty jabs in the face for you. You’re then pitted against 18 fighters. Whenever you beat a dude, you progress to the next, and, unsurprisingly, he’s a little harder to take down. So it goes until you reach the top.

You can execute the expected repertoire of jabs, hooks, and uppercuts by tapping and swiping on appropriate parts of the screen. You can also dodge your opponent’s blows, and ideally, you should swoop in and go for the metaphorical kill as soon as your rival swings and misses. Knockouts occur when someone’s energy is depleted; if you (or your opponent) suffer three KO’s, or if one of you is talking to angels when the Ref counts to ten, the match is over.

If you win, you move on to the next challenge. If you lose, you get to remember that nobody ever became a champion in one day.

But all work and no play makes Jack a woozy boy. You can level up your boxer’s stats in between fights, including the strength of his moves and his overall endurance. Winning fights will grant you skill points, but a much faster way of achieving super strength is to buy skills and equipment with in-game money, or (of course) with premium currency.

Predictably, you need to do a whole lot of grinding before you can save up enough in-game dosh to buy upgrades and costumes. It’s too bad, because Punch Hero gives you a lot of material to customize your fighter with. You’ll just never get to touch much of it unless you break out your credit card. 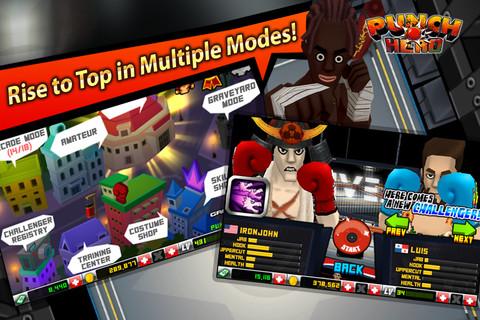 To make matters worse, it’s hard to shake the feeling that Punch Hero‘s difficulty was jacked up as early in the game as possible for the sake of selling microtransactions. Punch-Out!! let you find your bearings by having you wail on poor Glass Joe, but here you can expect to go several rounds with your first opponent before he stays down. When you lose, the game will remind you that you can purchase upgrades at the training gym. Helpful!

The controls in Punch Hero are responsive, and there isn’t much wrong with the core game, except that it’s not as fun and goofy as Punch-Out!!, which is clearly what Punch Hero is trying to emulate. The subtle coaxing to make in-app purchases is also impossible to ignore, because its presence feels kind of dirty in a sport that’s supposed to be about skill and honor. Given that Punch Hero is a game that pits you against a host of opponents with crazy-illegal special moves, that’s saying a lot.