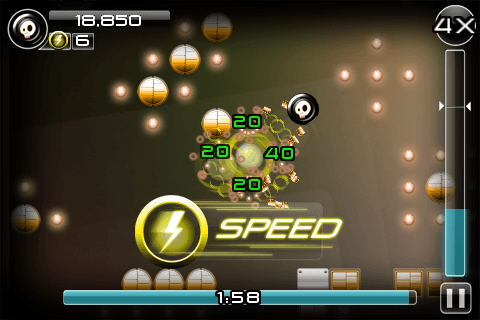 Puckerz! is a fast-paced gem of a game that’s unlike anything else on the iPhone

I have to hand it to Groundbreaking Games: the developer’s name is extremely appropriate. The company’s first title to hit the App Store, Puckerz! is one of the most delightful surprises I’ve encountered in quite some time. It’s a goofy, simple little gem of a game that’s quite unlike anything else on the iPhone.

The idea behind the title is pretty basic. Players first choose a puck to play with, though this is simply an aesthetic decision. No puck has an advantage over any others (I was torn between the skull and ninja designs when it came to declaring a favorite). Gameplay consists of an enclosed board filled with bricks, blocks, and orbs to break/acquire for points. Players shoot the puck across the board and raise as many points as possible before the timer runs out.

Admittedly, on paper this sounds like it could be a little boring. I promise, it’s not. Developer Groundbreaking Games manages to introduce new elements regularly that continuously keep things fun. After a few levels players have to start avoiding hazards like bottomless holes and contact mines (both of which impose a time penalty if they come into contact with a puck). Soon after that, unbreakable bricks start to appear. These additions consistently add fresh challenges and force increasingly strategic approaches.

Of course not every addition to a level is a challenge; sometimes they’re boons. Every ten orbs acquired in a single shot provides a time bonus; some levels have a star that provides a substantial amount of extra time; and there are speed/distance bonuses that can be picked up, too.

Visually, Puckerz! is great. The graphics are a simple, two-dimensional affair shown from a top-down perspective. Yet they’re sharp and brightly-colored, and contain a playful feel that permeates just about every aspect of the game.

The sound, too, is surprisingly high-quality. Different effects sound fine, but the music is what takes the cake. It’s a fun blend of fast-paced, poppy techno and it changes up between levels so that it never gets boring, adding to the overall play experience. That said, there’s no option to listen to music from the iPhone’s library, though that’s pretty much the game’s only fault.

Puckerz! isn’t exactly the deepest of games, but that’s more of a strength than a weakness. It’s a fun, fast-paced, and always seems to stay challenging enough to keep players enthralled. This is a perfect example of just how brilliant basic can be.