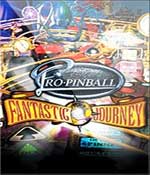 It’s amazing what a little look back at gaming history can do for perspective. I have been hankering for a realistic pinball game with decent physics, table design and control for a while now. Imagine my surprise when I played Pro Pinball Fantastic Journey. This game managed to fulfill my needs for a good pinball game. But here’s the kicker: They accomplished it ten years ago. Thanks to download site Good Old Games, this historical oversight can be rectified.

Released back in 1999, Pro Pinball Fantastic Journey is the fourth title in the series. Each part of the name plays a key role in the gameplay experience.

Fantastic: First off, all the production values are still impressive today. The single table is replete with all the lights, bells and whistles you would expect at your old arcade. At the highest graphics settings, the details and textures would make you swear it was a real table that had been photographed. Little details, like mimicking the style of the LCD screens, really help bring this table to life. The only downside is that the game sometimes stutters when there are many balls on the playfield in a multiball, but not to the point of making the game unplayable. There is no windowed mode for Pro Pinball, but considering the amount of detail in the game, it isn’t missed.

The music, while sometimes a little corny, fits nicely into the style that gets pumped out of most of the great modern pinball games. The sound effects are straight out of the machines themselves, right down to the satisfying loud knock if you get a free game. What’s more, the game is presented in Dolby Surround – something many modern games can’t boast.

Journey: The story is not going to win any awards, but gets the job done and helps propel the gameplay. The story is set in a Victorian time, when the evil General Yagov is trying to rule the world. Your job is to go on several journeys using steam-powered vehicles to go all over the world and defeat the general.

Pinball: The pinball playfield is littered with the usual trappings, like jets, drop targets, ramps, outlanes, ball locks and everything else you’d expect. The game advances by you hitting various targets and ramps, which begin different play modes. The goal of the game is to complete all of the journeys (boat, air, drill and submarine, each a different mode) to face Yagov at his island. (Of course, the main point of the game is to score as high as possible, but you already knew that.) Making the shots is a devilishly difficult task, but that’s the point of pinball.

Controlling the game is a breeze once you get used to it. The default control scheme uses the two shift keys for flippers, both alt keys and spacebar for nudging, the enter key for launching the ball and the S key for start. Everything is completely customizable, so it’s easy to find a scheme that works for you.

The gameplay itself is the closest thing I have experienced to real pinball. While you won’t get the weight of holding the large machine between your hands, the ball moves realistically, without the usual anti-gravity that affects most pinball games. There are no random bounces – except, of course, for the same lucky ones you would see on a real machine.

Pro: If you ever wanted to know what it was like to actually own a real pinball machine, Pro Pinball Fantastic Journey is a really good primer. The game says "start simulation" rather than "start game" because, for all intents and purposes, the machine is real. Want to go into the "operator mode" and change the machine’s difficulty? Or see how much virtual money had been spent? Or change the frequency of the matches at the end of the game? It’s all yours to control. The list of options on the machine are truly mind-boggling.

The presentation, too, can be altered. If you want to have your virtual LCD screen semi-transparent and in color, you can have that. If you want the authentic black-and-orange displays of the arcades, you can have that too. You can select what kind of slope the pinball machine is sitting on, or even the condition of the flippers, bumpers of playfield! Want that game to be brand new from the factory, or did you get used to the old, beat-up machine at the corner store? You can have it both ways.

The biggest drawback with Pro Pinball Fantastic Journey is that there is only one table. But considering what you get in the package, it’s tough deal to pass up. For less than a few rounds at the scratched-up machine in the dark corner of the downtown arcade (assuming you can even still find one), you can have a truly authentic pinball experience right on your computer screen. If you grew up playing these quarter munchers, go ahead and – sorry, but it has to be said – take the plunge. You’ll flipper over it.