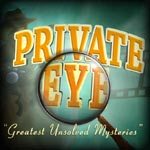 Not content with having players search their computer screens for well-hidden objects in Paparazzi, Gogii Games is at it again with Private Eye: Unsolved Greatest Mysteries, the latest “hidden object” casual game, but with a P.I. spin.

In fact, Private Eye is much more than a typical “hidden object” game as it folds in many other game styles – and this happens to be both the game’s saving grace and one of its shortcomings at the same time. All we be explained in due time.

At the start of the game you’re tapped by a mysterious figure who requires your services as a private investigator. Your goal? To infiltrate the Enigma Society, a secret international organization that’s up to no good. Sounds ominous, sure, but the game is laced with plenty of humor, be it your overly enthusiastic high-school assistant, Kimmy, or some of your goals, such as travelling to Venice to recover stolen mouthwash! The suspects are equally as amusing, such as the Disco Trio, a cheesy nightclub dancer with a hand puppet on each arm!

The core game-play is not unlike other “hidden object” games. Think of them as a kind of timed “Where’s Waldo,” where you see a list of items you must find in a busy scene, such as a sleeping dog, bag of mints, bonsai tree, toothbrush or flute. Your mouse cursor turns into a camera lens, so when you hover over a listed item, you click the mouse button to take the photo. If it’s correct, you get some points and the item is removed from the list; if incorrect, you lose some points and continue your search to find all the items before the timer runs out.

In total, there are 30 unique locations — and many bonus items to collect per location; your cursor turns into a hand and you can pocket some items for extra points. Sometimes the cursor turns to an eye, which means you can zoom in to visit a secondary location (such as inside a painting on the wall), with its own set of nine items you must find! The humor carries through when you find items, too, with silly descriptions and the odd joke. Example: When I found a kangaroo on a level, it says: “What kind of kangaroo gives advice from a mountaintop? A “gu-roo,” of course. Ahem.

The game then throws in extra challenges for the player – if they choose to accept them. One is to find all nine items in a level in consecutive order (no easy task) for a bunch of bonus points. Or, some of the items listed are in blue, and if you find all three of them back-to-back (in any order), you’ll also collect some extra goodies.

As if this weren’t enough, Private Eye adds a bunch of other mini-games every few levels or so. One challenges players to compare two similar photos and click to spot all the differences between the two within the time limit. Another one might have been inspired by the You Don’t Know Jack games, as it shows a handful of words at the top of the screen and you must click quickly on the exact same word when it appears briefly in the center of the screen. You can be fooled, however, such as looking for the word “Kitty” and prematurely clicking on the word “Kimmy,” and thus, losing some points. Another mini-game is finding an object based on its silhouette.

On one hand, all of these extra game-play mechanics keep the player on his or her toes, and keeps things fresh, but at the same time it seems a little over the top and even overwhelming for non-seasoned gamers. I found myself at one point in the game thinking “They’re cramming way too much here.”

Another beef is that sometimes the items you need to find look like other items. In one scene, I clicked on what I thought was a baguette — a long, slender and yellowy brown object that looked like a stick of French bread – but alas, I was deducted 5- points as it was not the baguette after all.

Overall, Private Eye is packed with game-play, many smaller challenges and plenty of humor. Just be aware veteran casual game fans who want a more challenging “hide and seek” game might get more out of Private Eye than the newbie player.