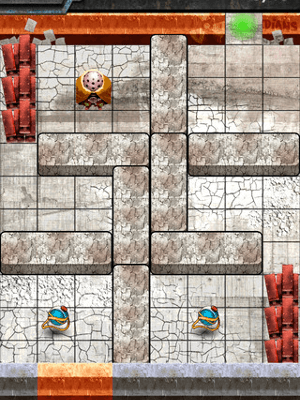 Prime’s Quest moves the sliding puzzle two steps forward and one step back.

The sliding block puzzle does not mess around.  It’s a no-nonsense, stick-to-the-formula kind of genre that is rarely seen gallivanting with other game types.  Unlike the permanent identity crisis of match-3 games, sliding puzzles know who they are and what they want: move the blocks, get the highlighted block to the goal, home in time for dinner.  Prime’s Quest is here to change that, and cause worlds to collide.  Sliding block puzzle, meet adventure game.

Prime’s Quest begins with a simple assignment from your (Prime’s) grandfather: test out his Q.U.E.S.T. device, which will allow Prime to move large stone blocks from any distance.  Our colander-headed hero does as he’s told in the nearby ruins of Scrapcity, until he notices Grandpa has gone missing—kidnapped by strange men—and sets out to find and rescue him.  This event is the catalyst for Prime’s journey across the post-apocalyptic wastelands of his world, and our encouragement to keep solving the puzzles presented.

Underneath this story overlay complete with character interactions and cut-scenes, Prime’s Quest is still a sliding block game at its core, and the majority of the experience is based on working your way through increasingly challenging puzzles.  On each level, Prime is the target that must be ushered to the exit, maneuvering through openings you’ll create by sliding blocks around.  Although blocks can only move the direction they are facing—horizontal blocks move horizontally, vertical blocks vertically—Prime is able to walk freely and occupies a single one-by-one square, allowing him to snake around corners and through small openings to reach the exit.  While each block shoved counts against your movement total, Prime can travel indefinitely without adding to the counter, making each level a balancing act of moving Prime as much, and blocks as little, as possible. 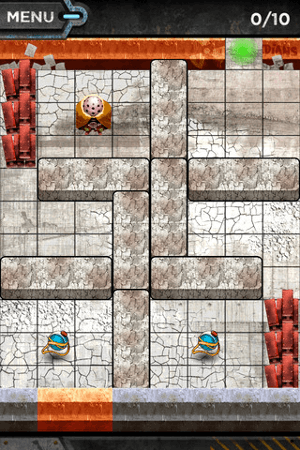 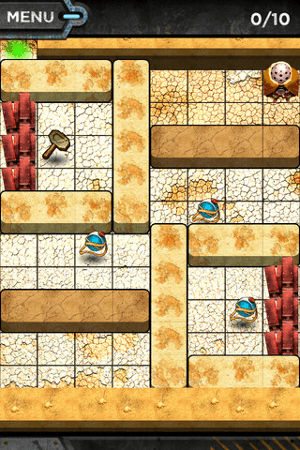 While getting to the exit is the only victory condition required to complete a level, doing so within the number of moves listed, as well as collecting canteens of water along the way, will determine the number of stars you earn.  Prime will also occasionally have to collect keys to unlock the exit door, meaning even a seemingly straight-shot puzzle can have you zigzagging all over the place for maximum stars and actual completion.  These stars are used to unlock challenge levels that are separate from the story-based adventure mode, and that live up to their name from the first 18-move par level.

Not that adventure mode is a cakewalk; Prime’s Quest eases players into its puzzles with a straightforward tutorial and a handful of low-impact stages, but quickly increases the difficulty once Prime’s grandfather goes missing and the hammer item is introduced.  Like the exit-unlocking key, hammers must be picked up by Prime and are then usable one time.  They can break apart curved blocks that are unmovable, turning them into two separate, sliding blocks—but will only destroy a single square upon use.  Hammers are necessary items on the stages they’re available, but also present another layer of planning—while you can break any block at any location with a hammer, there is always a specific sweet spot that will be the most useful to getting Prime to the exit. 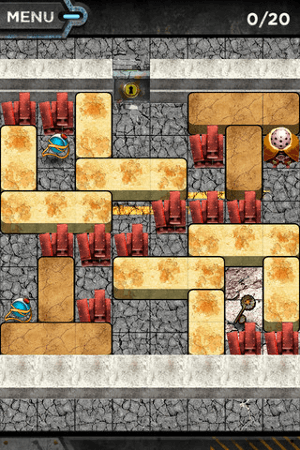 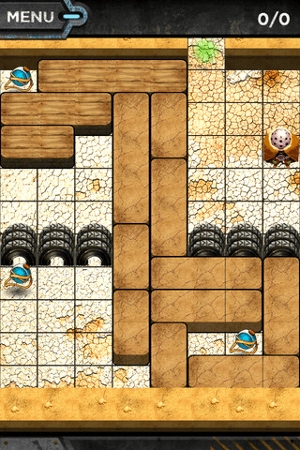 This variety beyond just sliding blocks is a gift to veteran players and a welcome change of pace, but it also highlights Prime’s Quest‘s greatest weakness: its unforgiving difficulty.  Despite having complex levels that require many dozens of moves, on top of perfectly aimed hammer strikes and the collection of key and canteens, Prime’s Quest has no undo button, nor even a hint feature.  Players that are drawn into the game by its addition of a story and unique puzzle solutions will quickly find themselves overwhelmed by having to constantly restart levels just to meet the move quota.  Even a single undo would be a welcome addition for hammer- or landmine-based levels, where breaking the wrong part of a block will ruin all the beaded-brow work you’ve done up to that point.

For those who aren’t deterred by the often frustrating level of difficulty, there are over 125 puzzles to take on and a consuming level of completionism available for those who want to three-star each one.  While other sliding puzzle games like Unblock Me admittedly have more levels available, Prime’s Quest offers something deeper with its plot-driven goals, simultaneously haunting and soothing soundtrack, and almost Bosch-like visuals.  It offers a glimpse at what this genre is capable of when turned into something larger than the sum of its puzzles, and that glimpse is quite lovely.