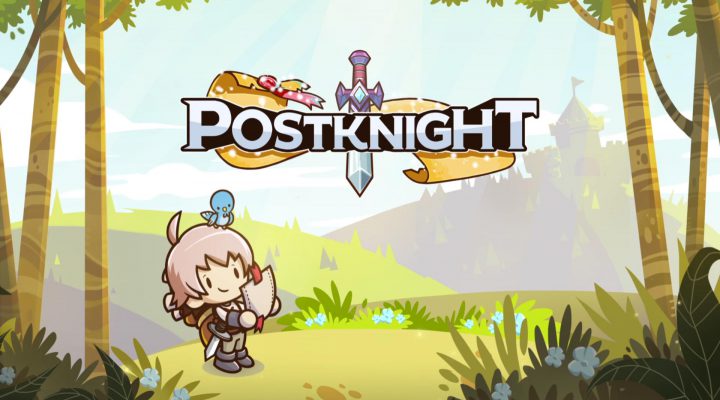 The bite-sized missions provide satisfying adventure options and rewards anytime, but can easily be chained together for longer play sessions.

Tons of loot, equipment, and levels to unlock, providing a constant sense of progress.

The "energy meter" is extremely generous; you'll rarely have downtime, and there's always something to do in the rare event you are waiting on something.

Although the gameplay is fast-paced and fun, it can get repetitive, especially since the Postknight always uses melee weapons and no magic.

Townspeople are pretty one-dimensional, offering little in the way of dialogue or story.

In what seems like a current bug, the offline, idle rewards don't always show up.

Postknight is an adorable, engaging RPG from the creators of the towerless tower defense game Tiny Guardians. As in Tiny Guardians, developer Kurechii has taken some elements from a popular genre and reworked others, resulting in a game that is both familiar and novel. The “bite-sized bits” that make up the Postknight’s adventures are perfectly packaged for mobile, allowing players the joys of monster-slaying and loot-snagging anytime without feeling confined by dungeon length. At the same time, the non-invasive energy meter and availability of multiple areas to explore also allows for much longer forays into the colorful, welcoming kingdom of Kurestal.

Players control the eponymous Postknight as he takes on his first real assignment. In Kurestal, Postknights handle dangerous deliveries to remote or monster-infested portions of the world. Our hero is sent to the village of Pompon after its inhabitants have been scattered by a dragon scare. Although his main goal is to get their letters and packages handed off, he’ll have to first find the missing villagers before he can actually become their deliveryman. 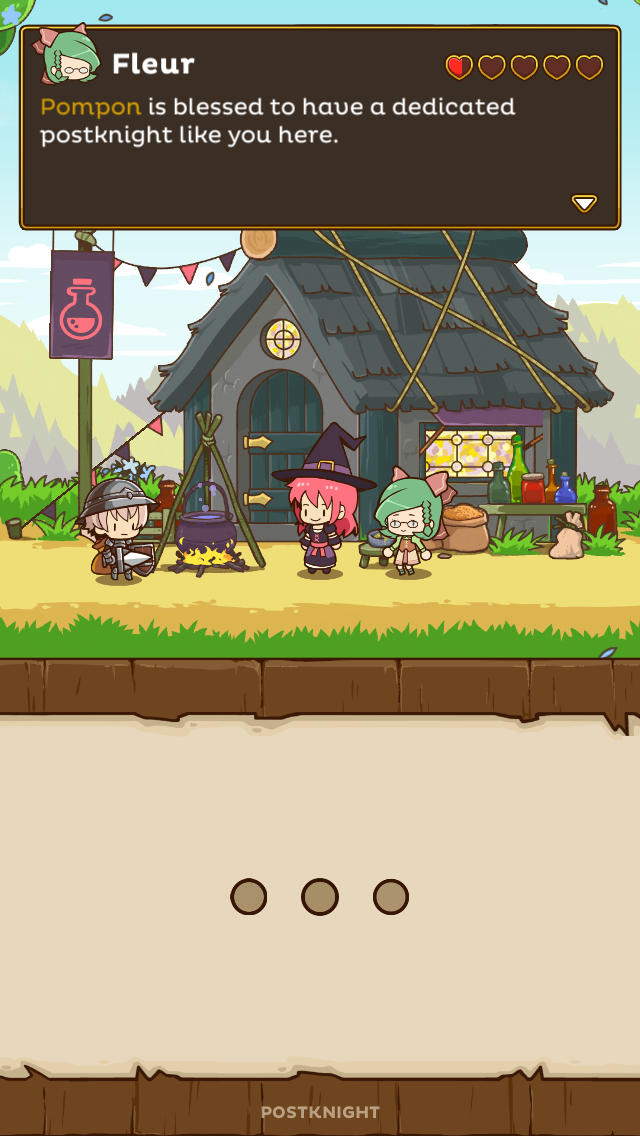 This search (and all of the other primary adventuring in Postknight) takes place in extremely short sessions of auto-running RPG battles. When the Postknight goes out on a delivery or other assignment, he’ll automatically walk along the side-scrolling path and attack any enemies he runs into. Players will assist him with three commands: his charge, shield, and potion skills. When you tap the charge button he surges forward, lunging through any incoming attackers and doing extra damage. When his shield skill is activated he’ll temporarily have a higher defense and will block projectiles. And using his potion will refill some of his health and provide a special boost to defense or another stat.

All three skills can be used an infinite number of times but have a cooldown period, so you can’t just spam them endlessly but need to consider the best moment to use them: for instance, if you activate the shield skill too early and run into archers soon after, you’ll be at the mercy of their arrows until that skill recharges. The battle system is somewhat similar to Buff Knight or Infinity Dungeon Evolution in that the hero is technically on auto-pilot, but he won’t get very far without the player’s active and thoughtful input.

These battle-filled excursions are extremely short, with a single trip lasting about 10 to 20 seconds. Each town the Postknight visits contains five different “routes” and each of these routes is broken up into five of the 10-20 second trips. The story progresses as you complete the tiny chunks of each route, introducing new characters and additional hazards the Postknight must assist with. Although he begins by tracking down the inhabitants of Pompon, he’ll soon be contending with pirates, bird-nappers, and other threats to the ever-expanding number of people he’s sworn to deliver to. Despite the sections of each route being so short, the fact that you receive a bit of story at the end of each one helps them feel important and like you’re making progress even after very brief trips. 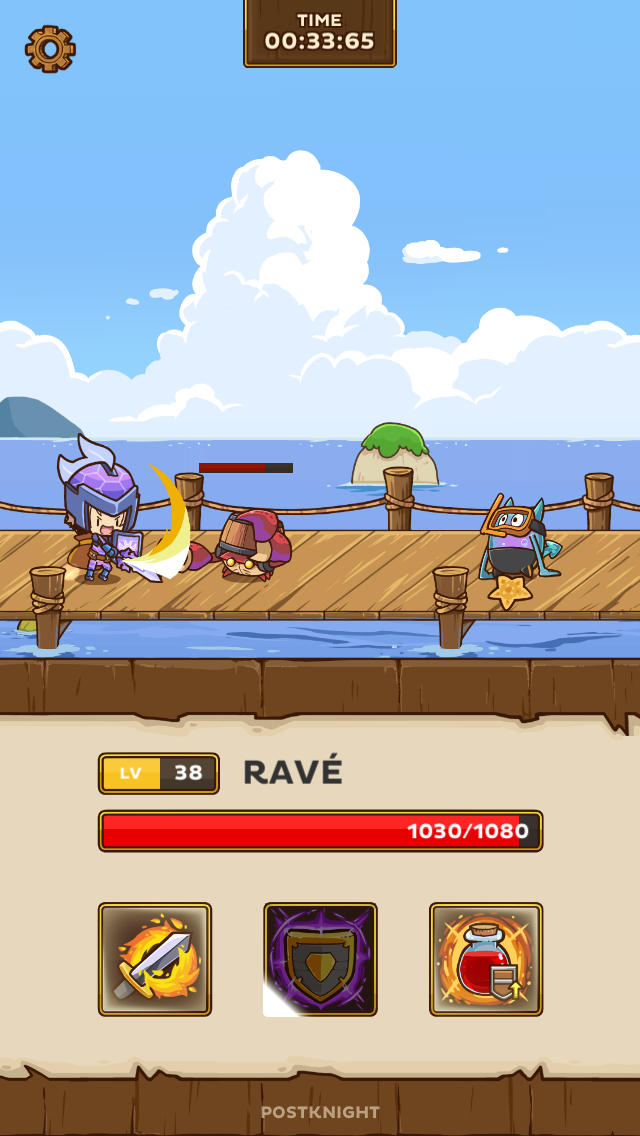 The other momentum maintainer is the amount of loot and levels you’ll earn as you travel. The enemies you slay generously drop items upon defeat, every section of road you complete ends at a treasure chest, and every chest you open contains three different rewards. Even after just a few excursions outside of Pompon you’ll have plenty of items in your Postknight’s personal pack. These items are used for upgrading his equipment, improving his potions, or as gifts to the single ladies of the villages he services. He’ll also be leveling up regularly and implementing stat bonuses—Strength, Agility, Intelligence, and Vitality—to become permanently more powerful, resulting in a constant sense of growth.

Outside of these dangerous delivery trips, the Postknight will spend time in the towns he is assigned to, with more towns opening up (and available to revisit anytime) as the story unfolds. Every town contains NPCs that manage different shops, from the equipment-improving blacksmith to the item-selling merchant, as well as some eligible bachelorettes that he can woo with items he’s collected on his journeys. Once a girl likes him enough, she will return the favor with gifts of her own, as well as possibly showing up on his delivery runs with a health-refilling pick-me-up. The character interactions are somewhat lacking, as we don’t really get much in the way of conversation or backstory from the NPCs in town, but they’re friendly enough while serving as a support system for their stalwart Postknight.

If your Postknight is struggling with a current story mission even after upgrading his gear in town, there are other ways to build him up and grind for items that may come in handy. The first is by replaying completed routes: once you finish a five-path route it becomes available on its associated town’s bulletin board. You can tackle the route in one go, resulting in a slightly longer trip—closer to a minute than 10 seconds—and all the items and EXP that go with it. The time it takes to complete the entire route is recorded and used on the Postknight leaderboards. The other option is to take on delivery quests from the mailbox next to the bulletin board. These are standalone, evergreen assignments as short as the single story missions that award all the same types of items and EXP, as well as Postknight tokens. Tokens are used to increase your Postknight’s rank, which determines how many coins and EXP he earns when you aren’t playing the game along with the difficulty of delivery quests.

The only thing that may keep you from playing any of these missions is the Postknight’s health: this acts as the stamina meter for the game itself, preventing you from taking on a delivery if it’s too low. But his health refills at a steady pace—12 HP every three seconds—and is maintained from the last trip, so if you finished a route without taking much damage you’ll be ready to jump into the next one immediately. We’ve never felt slowed down by the health meter, especially since the few times we’ve had to briefly wait for a refill we simply spent the time upgrading our equipment or handing out gifts to our girlfriends. 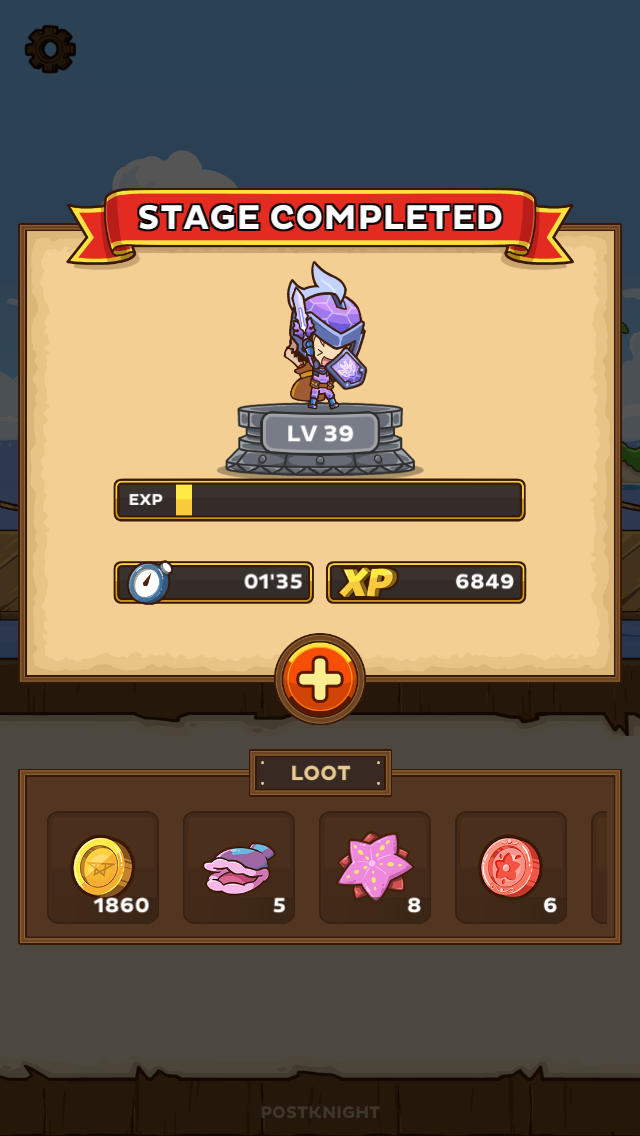 The generosity of Postknight’s health bar is echoed in nearly every aspect of its gameplay. Items, coins, and EXP are doled out at an extremely satisfying pace. There is no shortage of missions to tackle or loot to discover. Levels are filled with adorable (but deadly) enemies ranging from fuzzy dire wolf cubs to inner tube-sporting Blooplets. The trips are quick, action-packed excursions that grow in complexity as you meet new enemies and unlock skill variations, and they award anything you’ve collected whether you succeed or fail. And even if you’re waiting on something—a health refill, a shop refresh, a girl’s gift—you can exit the game and continue earning coins and levels. Kurechii has crafted a wonderful, rewarding game in Postknight that mixes elements of action RPGs, auto-runners, and idlers into a package that successfully delivers.