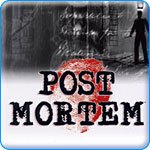 Dig film noir – that special genre of movie reserved for fedora-wearing gumshoes, moonlit streets, saucy dames and senseless crimes? Then it’s a cinch you’ll enjoy old-school adventure Post Mortem, which, despite its lack of modern-day innovation, spins one seamy potboiler of a yarn.

While starting to show signs of age (the game was originally released in 2003 on CD-ROM), a large file download and more formulaic than fascinating, you’ll still enjoy this user-friendly whodunit nonetheless.

Set in 1920s Paris, you play Gus Macpherson, a private detective who’s retired to a life of painting… and the tranquility of whose world is soon shattered. When a mysterious and sultry femme fatale knocks on his door one stormy night with an unexpected request, he predictably finds himself sucked right back into the world of criminal investigation.

This stranger – one Sophia Blake – quickly coaxes you, through MacPherson’s eyes, to interrogate suspects and sift for clues in hopes of solving a gruesome double beheading. As such, it goes without saying that the title (rated M for Mature at retail) and its subject matter may not be considered suitable for children by concerned players. Even so, discerning adults should get a kick out of the moody and haunting tale, which also bears vague supernatural overtones.

Borrowing a page – alright, entire game manual – from classics like Myst, you’ll spend most of your time panning your mouse 360 degrees around period-specific 2D environments, e.g. apartments and bars. Wave your cursor over an object that can be examined or interacted with; clues ready for collection; or somewhere you can walk to, and it changes to indicate that actions may be performed with a click. Right-clicking instead calls up the inventory screen, where you can examine documents and access items you’ve stashed throughout the quest.

Much of the action also involves the use of dialogue trees, or selectable questions and comments which help advance chatter between characters, with the occasional puzzle thrown in as well. Interestingly, the questions you ask and actions you perform directly lead to new outcomes and avenues of inquiry. It’s to the title’s credit that commentary is so well-written, and the story so elegantly integrated. However, conversations that can’t be skipped or sped through and banal voice acting do grate and rob the experience of emotional impact.

Similarly, the graphics, while outdated and a bit muddy, with stars represented by low-resolution computer-generated models, manage to evoke the proper atmosphere for intrigue regardless. Whether solving alchemical riddles or switching to view the action from another individual’s perspective in one of the title’s most curious segments (an interactive flashback sequence), expect to be suitably engaged.

A soundtrack filled with hissing rain, crackling thunder and tinkling piano strains further helps heighten tension, which complements on-screen excitement nicely. Not that anyone would ever accuse the episode of being all that riveting: This is type of slow, deliberately unfolding title best played late on a lonely winter’s night in a dimly-lit study.

But provided that sounds like an appealing proposition, and you don’t mind a handful of minor audiovisual and technical hiccups – including program crashes when you attempt to switch windows – what’s not to like? Granted, we wouldn’t recommend paying full price for the outing, as the now six year-old CD-ROM can be had for half as much from the bargain shelves of a local retailer. Even so, while its pricing and tech specs may not have kept up with those common to games of the current era, a timeless tale of evil deeds done and justice served makes this one a winner.