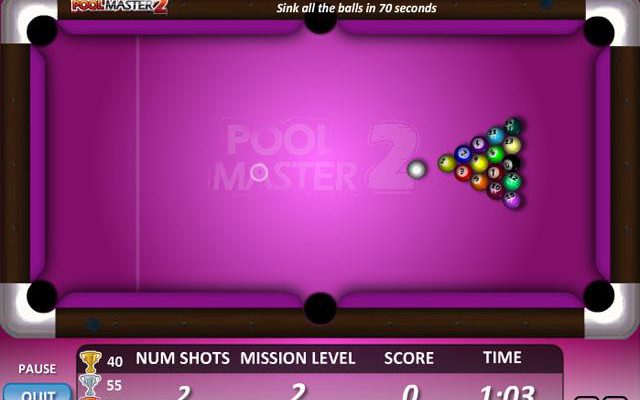 Pool Master 2 offers some interesting twists on pool, but as a Facebook game it’s a bit half-baked

Pool Master 2 is another one of Social Point’s Facebook games that feel more like a downloadable title, this time taking on the time-honored genre of PC pool games. Pool Master 2 turns pool into an attempt to get the highest score possible in two minutes of play. A player gains points for sinking shots into the pockets, with bonuses for combination shots and a penalty for scratching (that is, sinking the cue ball into a pocket). Power-ups appear in certain locations on certain tables, granting bonuses like extra time on the clock or the ability to make power shots.

What’s kind of weird about Pool Master 2 is that unlike other score-based Facebook games, there’s no default level layout that everyone has to play for, say, a week. Instead, Pool Master 2 has 90 levels in its basic mode and 30 missions you unlock by clearing basic levels. Mission levels are more challenging but give you more time to play (five minutes instead of two) and revolve around accomplishing tasks like “gather all the stars in less than three shots” or “sink all the balls in 70 seconds.” For clearing basic levels, you just need to sink all the balls on the level in less than two minutes to clear it. You can continue playing levels until your time runs out. 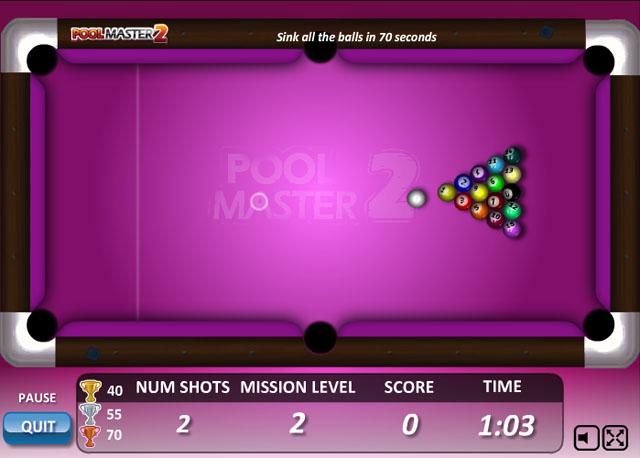 So in score terms, how high your score can get really depends on which levels you’re playing. Levels with lots of balls to sink and lots of power-ups are going to yield more points than a level that only has six strategically-arranged balls. This makes the score attack aspect of the game feel a bit vestigial, especially since the only other social aspect of the game is your friends being able to give you extra lives. You begin playing Pool Master 2 with three lives, lose one whenever time runs out, and regenerate them at the rate of one life per half-hour up to a maximum of three.

Pool Master 2‘s aiming controls are probably the highlight of the game. You control the game entirely with the mouse, using the pointer to align where your cue is going to hit the ball. Reticules help show you what direction balls will go in once hit, which makes it easier to quickly plan your shots out in the two-minute limit. Controlling how hard you hit the ball is a bit dodgier, since it’s controlled by holding down the left mouse button to prep the shot and moving your mouse back. This moves the cue representation onscreen and the farther back it moves, the harder you hit the ball. 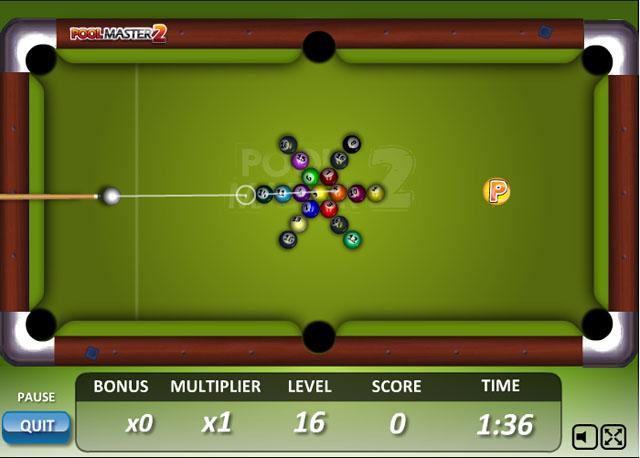 Pool Master 2 is a reasonably enjoyable game, though it’s not without some annoyances. The misleadingly designed pop-up ads that plagued Super Crayon occur just as frequently in Pool Master 2 and are just as annoying. Bursts of lag also interfere with the action-oriented gameplay. The controls for how hard you hit the ball are finicky and it’s very easy to end up hitting it much harder or softer than you actually intended. If the thought of a pool Facebook game intrigues you then Pool Master 2 is worth a look, but otherwise it has little to offer.