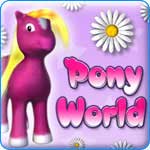 Every little girl dreams of having a pony, or so they say. Thankfully for parents, now besotted toddlers can finally get one courtesy of Pony World Deluxe, which lets you raise simulated versions of the friendly critters at a fraction of the real-world cost.

A surprisingly robust and replay-friendly spin on the usual virtual pet-rearing diversion, it’s nonetheless also sadly saddled with some of the same aggravations that come with caring for the actual animals.

On the bright side, you’ll immediately be struck by the depth and breadth of the vibrantly-colored universe in which the outing’s set. Starting out, players can customize a pony to their heart’s content, tweaking variables like name, gender, skin color, bandanas, socks and even tattoos. (Think hearts, flowers and – oddly – Japanese kanji writing).

Creations, which then appear as appropriately-clothed and -decorated 3D characters atop 2D farms dressed with trees, shrubs, stables and fountains, are yours to control and interact with. Thankfully, despite the beasts’ overall clunky, low-quality looks (almost as if they were designed by a junior artist), oodles of little animations give them way more personality and charm than one might initially anticipate.

Then again, play’s also unexpectedly complex, with a number of tasks assigned to you at any given moment. Not only must you keep each pet’s key stats (hunger/thirst, fellowship, beauty, comfort, happiness and energy) within safe levels. It’s further imperative to decorate one’s farm, create fields with sustainable crops, hold down a job (comic, magician, paramedic, etc… who knew the creatures were so talented) and interact with both your creations and computer-controlled ponies. So, at any point, one might find themselves worried about the following:

If it all seems a bit much, that’s because there’s a ton to see and do here – the developers really offer a ton of variety and value for the money. Unfortunately, documentation and tutorials are also a bit sparse, and you may find yourself both perplexed and overwhelmed since hand-holding is kept to a bare minimum.

For example: Your pony may want to enjoy a round of basketball at the local playing field, but you’re never explicitly told how to find it. Likewise, a well might stop working without explanation, or true love start to blossom without deeper insight provided into how to fix the issue or culminate the relationship. Similar to objects’ and characters’ interrelationships, many of the places one can visit and their affect on gameplay could do with a great deal more explanation as well. Given these caveats, it proves way too easy to fall into a downward spiral where you’re poor pony’s broke, unhappy and failing miserably at attracting a mate.

As such, the sum total’s a bit perplexing: The game seems geared towards a younger crowd, but even older enthusiasts are bound to be miffed by its sheer complexity. That said, every new day – yes, you have to rest and sleep as well – seems to reveal a new twist, whether it’s more dialogue choices, a surprise event, additional goods to buy at the store or even just a sudden rain shower. But provided you’ve got the patience to stick out the adventure, and learn through trial-and-error, who are we kidding? Vast and impressive as the sheer array of activities and amusements on offer here is, Pony World Deluxe proves well-worth a roll in the hay.