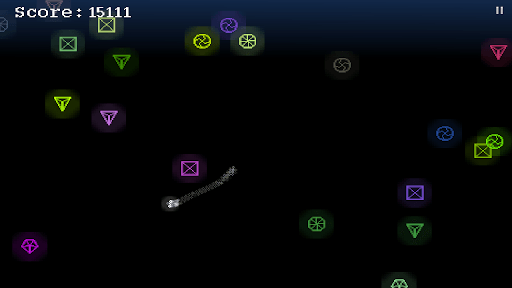 Polygon Storm, the intergalactic geometry dodger from Glass Knuckle Games is a pretty interesting concoction. First try to imagine a minimalist’s take on the “bullet hell” genre. Now strip away the bullets (yes, even your own), throw a little bit of Asteroids into the mix, and replace your starship with a vanity mouse cursor from some old shareware disk. Wait, I’m getting ahead of myself with that last bit. Those sparkly contrails emanating from the rear of your craft are one of many unlockables granted as you play. As a matter of fact, the entire game is built on a foundation of unlockable content, and I mean this quite literally.

You begin the game as a tiny X in the middle of a space field. Your job is to use your finger or stylus to guide this little abstract representation around the void, picking up orbs that grant bonuses while simultaneously dodging an infinite number of primitive shapes careening from the top of the screen. The longer you last, the higher your score, and the higher your score, the more “unlock points” you’re granted at the end of a round. You can then use these points to unlock everything from music and sound effects, to graphical flair and different modes of play.

What this means is that certain parts of the game evolve over time – the graphics, for example, switch from a black and white Space War look to something more visually akin to Robotron 2084 once that option is enabled. This makes the game appear a little bare at first glance (as some power-ups like the invincibility shield and even a proper pause menu are unavailable at the very beginning), but thankfully the developers kept the requirements for unlocking the more essential elements low enough that you should have accumulated enough points to grab most of them after your first few tries.

The better stuff takes a bit more time, but score high and you’ll soon have Radial mode (where enemies pour from the center of the screen instead of the top), Vertex mode (where they come in from various angles) and Storm mode (which is a mix of the other modes mentioned), among others. As mentioned above, Polygon Storm‘s graphics are decidedly retro, and even when they “evolve” it’s really just exchanging one form of retro art for another.  I do tip my hat to the music composer, though. This game features a snappy chip tune soundtrack from ABSRDST, which does a great job of adding an element of intensity to an already hectic game. 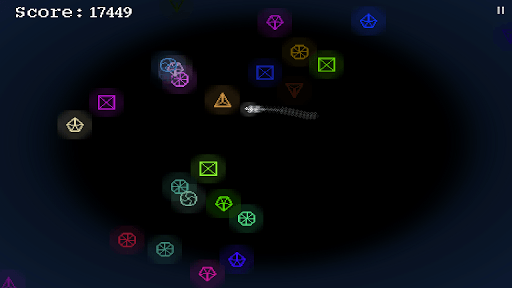 I do have to say that on a few occasions, I accidentally smashed into an enemy that was hidden by my finger just a moment beforehand, due to how tiny the player’s ship is. The previously mentioned trail of sparks helps with that, though. What helped even more was switching from my finger to a stylus.

Polygon Storm isn’t a looker. There are plenty of neo retro games that do more with their visuals, even within the constraints of the genre. It does have a nice concept, though. The developers stated that they built it the way they did in an attempt to show players how a game comes together piece by piece over time. I think it was a pretty decent attempt that would have come off better if the difference between the beginning and ending art assets was more dramatic. But at the end of the day, fun and gameplay are kings here, and this game offers enough of both to be worth your time.