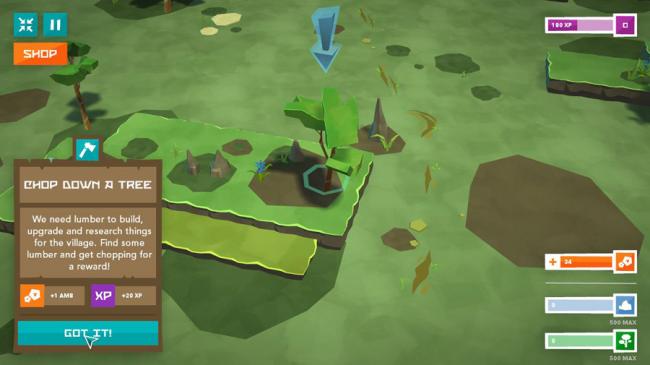 Where the Wildlings are

Polycraft combines the simplicity of browser-based gaming with the depth of a persistent strategy world.  While the game is entirely controllable by mouse, actions are not limited: players will gather resources, build bases, and take direct part in fast-paced battles that require both forethought and a twitchy trigger finger.  After a lengthy and productive beta period, Polycraft is now openly free-to-play via Turbulenz on the Chrome Apps Store.  A few rough edges remain, but its world has been highly polished, providing players a beautiful—yet dangerous—island habitat to play with.

The fairly short plot of Polycraft begins with an unnamed Hero washing ashore after a shipwreck.  Taking control of this Hero, you soon find a blunderbuss and a small settlement of friendly Wildlings that offer to let you stay with them.  In exchange, you need to help protect their village from nearby feral Wildlings that have been threatening your new companions.

The Wildlings’ village is pretty barebones, but provides the starting point for building up your defenses.  Luckily, the island is rich in the only two resources you need for additional construction: stone and wood.  Our Hero’s first and most persistent task is collecting these resources by hiking around the island, destroying rocks and trees, and carting the material back to base.  Since our Hero can only carry 60 pieces of stone and 60 pieces of wood simultaneously, he’ll need to make frequent trips from storage areas to the constantly-regenerating flora.

Once enough materials are on deck, it’s time to begin construction.  Since Polycraft is primarily a tower defense game, much of your efforts will be directed to building barricades, projectile towers, and similar defenses that can keep the ferals at bay.  At the same time, you’ll need to upgrade already-existing buildings in order to create new defenses, expand storage space, and attract new Wildlings to your cause.  While our Hero is the primary resource collector, the Wildlings perform critical building and collection duties as well.  For instance: Lumberlings collect wood, Buildlings carry out construction, and Defendlings man your frontline outposts.

When you feel sufficiently prepared for an onslaught of cave-dwelling Wildling challengers, you can speak to a Bannerling to begin a battle.  Each battle features specific types of enemies and rewards batches of wood, stone, experience points—or all three—that are called out before starting the fight.  Feral Wildlings will stream from their caves, heading straight for your village Headquarters and destroying anything in their path.  Towers and barricades will slow them down, but the Hero will also be thrown into the action, using his blunderbuss to blast ferals into oblivion with a move-and-shoot single click.  If you defeat all of the Wildling waves, you win the battle and its rewards; if your HQ is destroyed, you lose and are left with a wake of destruction needing repairs. 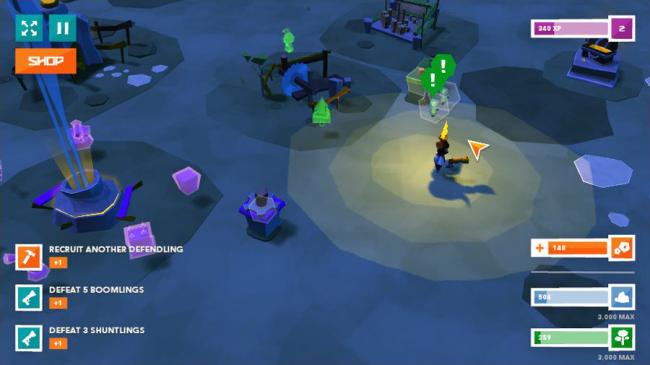 Although Polycraft is forgiving in this regard—bestowing defeat instead of ending the game entirely—battles are still nothing to sneeze at.  By the third campaign battle, the wave of Wildlings will number over 100, with arrow-slinging and rhino-riding Wildlings that can easily incapacitate your Hero before taking out the HQ.  Preparing beforehand and beefing up your defenses is necessary to prevent a wake of burned-down buildings leeching resources for repairs.  The good news is you have unlimited time to prepare, since a battle won’t begin before you speak to the Bannerling; you’ll need it.

The main impediments to progress are collecting necessary resources for buildings, and then waiting for those buildings to actually be erected.  Many early-level constructions will only take a hundred pieces of wood and a few minutes to be finished, but this quickly jumps up as you improve your buildings: a level four HQ, for instance, costs 10,000 stone and takes 24 hours to be built.  Since your Buildlings are doing the actual construction, you can still run around and play while waiting, but you won’t be able to build more than one object at a time without spending precious Amber on additional Buildling huts.

Amber is Polycraft‘s in-game currency that can be purchased with real money and is used to shorten the wait on both resource-collecting and construction times.  A building’s construction period can be bypassed by paying Amber, with longer periods costing more—a five-minute wait can be skipped for a few Amber, while a three-hour wait will cost you 100 pieces.  Similarly, resources can be replaced by Amber: if you’re tired of collecting stone and want to shell out 10 Amber for the remaining 1,000 pieces you need, no problem.  While you’ll definitely need to moderate Amber usage to save it for the most critical events—including reviving your hero mid-battle if need be—the game is generous in doling it out, ensuring you’ll always have some in reserve for a quick upgrade. 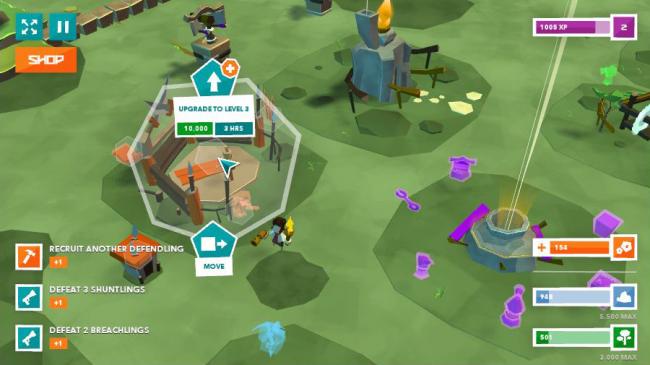 With its free-to-play features well-balanced, the most frustrating aspect in Polycraft is actually its linearity and lack of choice.  Buildings and upgrades are regulated by a branching system that severely limits and ultimately dictates what you can and cannot build.  While this makes sense to a certain degree, the small number of buildings in Polycraft coupled with the strict requirements means you will be forced to make and wait for numerous upgrades before coming close to your actual goal.  For instance, to upgrade your HQ to level three, you need a level two Outpost.  To get a level two Outpost, you first need a level two Defendling hut.  To have a level two Defendling hut, you’ll need a level two Defense Factory.  And to have enough wood to upgrade your Defense Factory, you’ll need an upgraded wood storage shed (or you’ll have to spend Amber).  That’s four separate upgrades—many of which you might not even care about—before you can even begin what you originally set out to build, the level three HQ.

You can upgrade your Hero to allow him to carry more resources to help decrease the pre-building effort, or choose from many other bonuses—like faster walking speed or a stronger attack—but the upgrade system currently fails to explain exactly what those bonuses do.  It’s only after selecting the carrying capacity upgrade, and being unable to undo your choice, that you’ll learn it lets the Hero carry a measly 10 extra of each resource—from 60 to 70 a piece.  This lack of information is a frequent issue that we hope will be resolved in future updates; in addition to bonuses being secretive, buildings’ requirements and improvements are hidden from view any time your Buildling(s) are occupied.  Planning out upgrades mid-construction becomes nearly impossible because of this.  Other info, like whether upgrading a tower makes it do more damage, is simply non-existent; while the assumption would be “yes,” without any data, we can only rely on trial and error, before and after experiences. 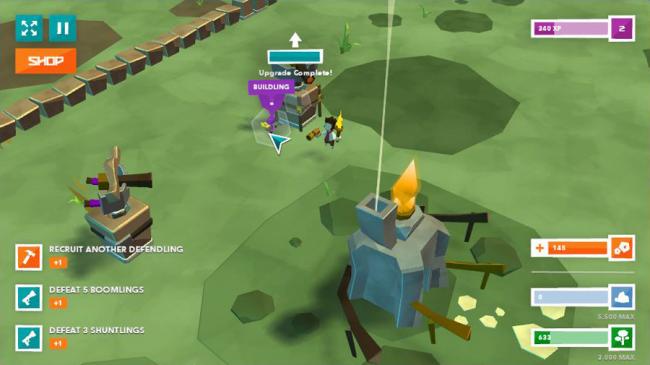 Although these issues do hinder some of the experience of playing Polycraft, developer Wonderstruck is so involved in upgrading and balancing the game that we have to imagine these few problems won’t persist for long.  The current iteration is still extremely addictive, successfully combining laid-back building management and fast-paced arcade action, with the extent of each really left up to the player.  If you’d like to spend your time building a massive defensive outpost and traipsing about the island with your adorable Wildlings, you can.  If you’d prefer to dive into battle unprepared, stopping only between fights to repair the smoldering wreckage of your HQ, you can do that, too.  Any path you choose will be easy to pursue, regularly rewarding, and sustainable for the long gaming haul.