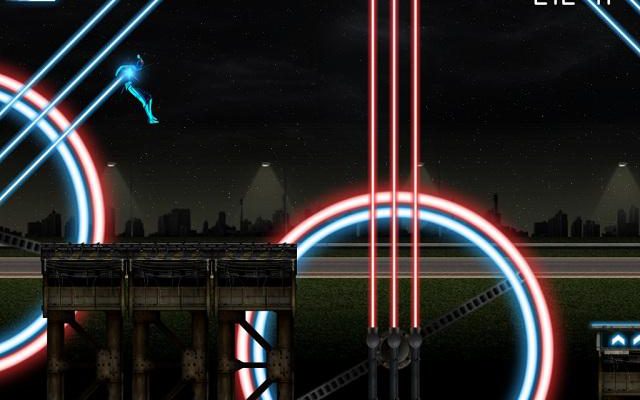 Things may be different for the latest generation of youth, but for children of earlier generations, seeing Tron was a momentous occasion. It lent credibility to everything that was beloved for them. Gaming wasn’t a waste — it was training for delivering the ripe justice that would someday need to be laid upon enemies and rivals. It also made neon seem cool, for whatever that’s worth. Today’s kids have been exposed to a different Tron, both in film and TV form. They also have games like Polara that attempt to capture the feel of the Tron universe. Polara tries to use Tron-like neon lights to cut through the darkness and avoid fading into a crowded App Store market.

The story of Polara puts players in a dystopian future in which the government is attempting to exterminate the poor. Insert your current-day political commentary joke here. You play as Agent Lara, a defense system special agent that is testing a protective suit designed to shield the wearer from potential attacks from rebels. These supposedly unsavory characters from the underbelly of society must be rather well-armed for those in power to need a defense suit to approach them. Not to mention they have the technology to contact agent Lara and deliver information that they somehow acquired — information so important that it makes Lara change her alliances. Now the only way to escape is to run through the security system in place that can only be beaten by — you guessed it — the suit Lara is wearing. The story is a mess, if we’re being honest. The dialogue is worthy of being in a film that I’d walk out of. Luckily, we’re not here for the story — we’re here for the game. 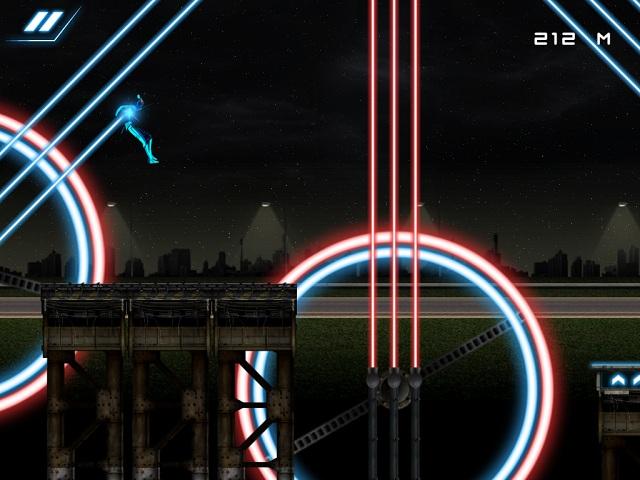 Gameplay in Polara pulls a little from the platformer genre and a little from the endless runner category. You’ll be given a level to navigate and Agent Lara will run automatically, leaving the timing of jumps up to you. Half of your screen is a dedicated area for jumping. The other half is lent to controlling the color of your suit, switching between red and blue with each tap. This element is what will get you through the sophisticated – if not a little convoluted — security system that is built to keep out the poor. The game then delivers unique obstacles in the level that require a certain color to get through. Blue lasers will zap Lara to nothingness if her suit isn’t blue. Red springs won’t launch her to the next platform if she isn’t rocking the red lights. The color swapping element seems to have drawn a bit from Ikaruga and Outland, though with a lot more running.

Polara sports 50 levels, each one more challenging than the last. As you work your way through the game, probably skipping the story-driven cutscenes that will drive you to want to cut them out completely, you’ll encounter some levels that are just downright mean. They are a challenge that requires multiple — and often many — playthroughs to beat. There is a death toll at the end of every level, and odds are good the number will not be single digits for some of them. The game also offers extra playthroughs with new objectives on each level, but after some of the more challenging ones, that offer feels more like an insult. The point is, this game will likely beat your brain on more than a few occasions. That said, Polara does do a good job of encouraging you to try levels more than once, despite the immediate hatred you may feel for them.

In spite of the entirely off-putting story that takes place during them, the cutscenes in Polara are rather enjoyable. They have a nice hand-painted look, and though they’re just pictures, they really seem to come to life. It’s a much-needed color injection in a world that takes its dystopian setting to heart. With the exception of your suit and the neon-lighted obstacles that stand in your way, the world around you is various shades of brown, black, and gray. There were a few moments that the contrast got to me as I was so focused on getting my color right that I completely missed that there was a gap in rooftops that I was running across. I understand this is a dark world metaphorically, but Polara takes it pretty darn literal — almost to a fault. 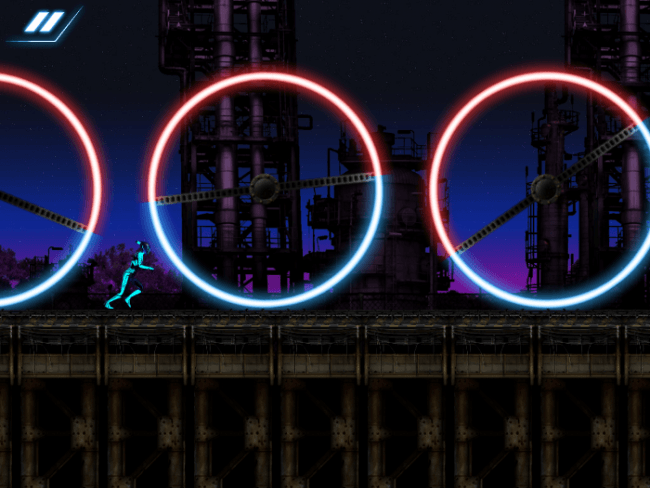 Runners and platformers come and go pretty often in the world of the App Store. It’s hard for new titles to gain ground on the modern classics that sit atop the genre throne. Polara makes its best effort to bring some variety to those categories with the addition of simple strategy elements that require intense attention. The problem Polara faces is that it tries to be more than it is. It wants to have an amazing story, a narrative that will engage and a world that feels immersive. It just doesn’t do those parts well. The gameplay elements are really solid. The on-the-fly puzzle feeling is well thought-out, levels are put together perfectly, and the game manages action and strategy well. It’s just not a story-telling game and, because it takes itself too seriously, it suffers in places. The game is worth playing, but it needs to lighten up a little.