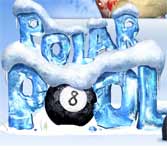 In the Paul Newman film, The Hustler, Minnesota Fats asks Fast Eddie Felson, "Do you like to gamble, Eddie? Gamble on pool games?" Thankfully, you won’t have to gamble on Polar Pool, the new pool offering from Wild Games, because you can play the demo, and within a few minutes, know whether or not it’s going to work for you.

There are good things to say about the game. For instance, as you’d expect from the creators of Polar Bowler and Polar Golfer, Polar Pool is chock full of comical characters and playful environments. You start out playing as Polar Bear on a table that slides along chilly arctic ice, and as you acquire points, you unlock new characters and tables. When you score 1,500 points, for example, you unlock Lena the Fox. At your next milestone, you unlock an additional table. This process continues until you’ve unlocked all six characters and six tables.

The visual presentation is another highlight of Polar Pool. On the first table, penguins play in the background, and when you sink a specially marked ball, one of the birds pops out of the pocket and begin wandering around the table. When you hit him, he does the cutest little nosedive scoot across the ice. On the next table, which is set in a wintry forest, foxes circle around the base of animated trees, which sometimes grab the playful animals and shake the living fur off of them.

Another plus for the game are the power-ups. Polar Pool comes with three modes, including Eight-Ball, Nine-Ball and Power Pool. You can play alone against the computer or against another player either online or in hot seat competition. Eight- and Nine-Ball are what you’d expect – computerized versions of the real thing. The gameplay gets more interesting in Power Pool, though, in which you can hit random power-ups that appear on the table to activate their special attributes.

For example, suppose you’ve broken the rack and it’s time for your first shot, but you don’t have a good bead on anything. You could hit the spinning whirlpool icon in the middle of the table instead and create a vortex that sucks down any nearby balls. Other power-ups include a tornado, an ice crystal that allows you to shatter any balls you hit, a lightning strike that pops all of the balls into the air and more. You have to hit the powerup and at least one ball before the powerup is activated, so good aim is always important.

If you miss more shots than you hit, you’re not going to rack up many points because the scoring system utilizes a multiplier that increases when you sink at least one ball during a shot. If you scratch or fail to take out anything, the multiplier plunges back to zero. Coins that increase your multiplier appear at random on the table and a star that triples it sometimes hovers over a random pocket. If you sink a ball in that pocket, you get the increase.

If your aim isn’t good, you can increase your chances of hitting something by steering your character after you shoot and making him or her jump over anything in the way of the object ball. Although you only have this ability until you hit your first ball, it increases your odds of pulling off a normally impossible shot.

And you’re going to need all the help you can get, because when it comes to the controls, Polar Pool experiences a meltdown. The first problem is that the developers tried too hard to cater to casual players by making the controls too easy, and in the process, came up with a system that feels unnatural. When using the mouse, for example, you aim first, and then you click the left button to signify that you’re ready to shoot. If you want to adjust your aim at that point, tough; you’re locked in. Surely most casual players could handle aiming and shooting at the same time! For the ones that need to take things one step at a time, at least give them an out if they want to fine-tune their aim.

What really impacts the gameplay, however, are the sluggish aiming and the lack of a decent viewpoint. You can pinpoint where you want to shoot using your mouse or keyboard, but the aiming cursor moves too slowly, and when you’re using your mouse, it takes a few seconds of back-and-forth tweaking to get it exactly where you want it.

Aiming with the keyboard is better, but it’s still hard to tell precisely where to hit the object ball in order to sink it because your viewpoint is skewed. Instead of being able to swing the camera anywhere around the table, you’re confined to a bird’s eye position behind your character. At times, this makes it impossible to draw a mental line from the object ball to the pocket, which makes sinking shots a hit-and-miss proposition at best.

Several years after Virtual Pool 3 nailed the mechanics of computerized pool using a combination of simple keyboard and mouse controls, there’s no excuse for the stiff mechanics of Polar Pool. The online mode could be improved, too. Instead of allowing you to select from a list of opponents, you’re paired with a random challenger. If there aren’t any online, you’ll end up staring at the "Searching for opponent" status message for a long time.

In another memorable moment from The Hustler, Fast Eddie says, "Fat man, you shoot a great game of pool." I’d love to say the same thing about Polar Pool, but the developers need to iron out the wrinkles in the controls first. Then they’ll have a winner on their hands.

Build-a-lot 2: Town of the Year Review