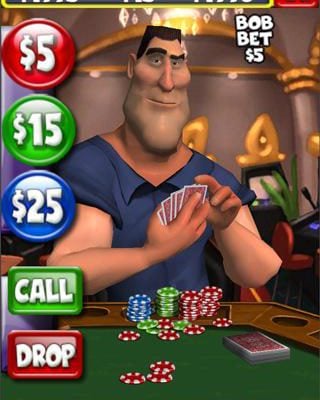 If you ante up for Poker With Bob, expect to fold quickly

Obviously the real world allure of poker is that it’s gambling, and playing well means you could win real world cash. Video game poker takes away the game’s biggest draw (since winning gives your digital cash), so if it’s going to be compelling the game needs to replace that with something unique. Poker Night at the Inventory, for instance, did it with four witty characters and tons of funny dialogue. Poker with Bob does it with, well… Bob.

In Poker With Bob, you’ll play 5 card draw poker against a virtual character named Bob. In case you didn’t know, in 5 card poker you’ll be dealt 5 cards, there’s a round of betting, you’re allowed to discard and draw a few cards, go through another betting round, and then a winner determined. It’s typically the game most people learned first, though these days you’d probably start and stop with Texas Hold ’em. 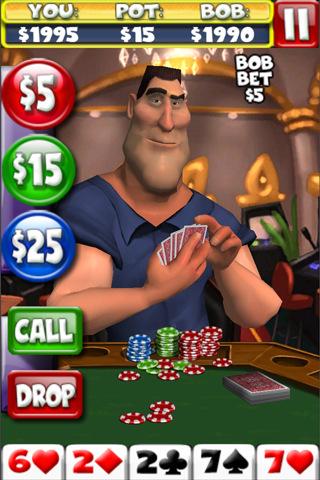 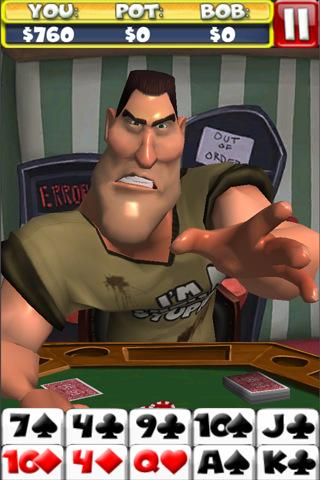 You’ll work through various levels of difficulty, each starting with more and more money at stake, and Bob in nicer outfits and better venues. And that’s pretty much it. Asides from nicer backgrounds as you work your way up the ladder, the game doesn’t change much. Same style of poker, same antes.

The biggest problem with Poker With Bob is one of intended audience. Fans of playing poker aren’t going to come close to being satisfied with the game. Heads-up (2 player) 5 card draw limit poker is probably the dullest version of poker there is. Not playing a table full of people and being limited to 5,15 and 25 dollar raises keeps the pots from ever getting impressive or alluring. You could have a fantastic hand and walk away with 10 bucks, which is just depressing. And that’s not the only poker issue in the game, either.

Each time you defeat Bob and move up a level you each start with more money in your respective stakes, but the bet levels stay the same at all times. So the pots stay at exactly the same amounts even though you’re playing with more money, which just means the games last longer and are less exciting hand to hand. At the absolute minimum the blinds should go up every few hands to generate more and more money being bet, leading to higher pots. But really, the game simply needs to offer higher bets. 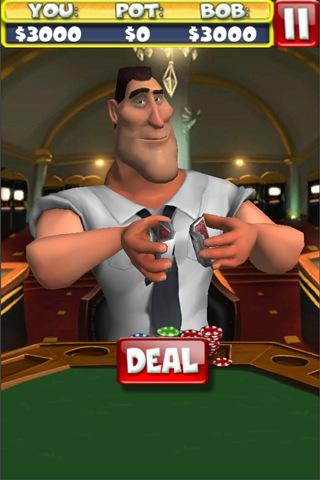 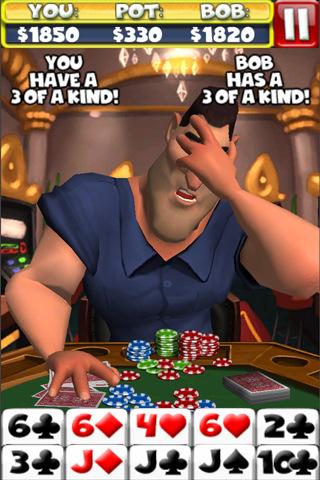 Two other smaller but worth mentioning faults. The first is this game absolutely killed my battery in a way I haven’t seen in quite some time. I went from full charge to low battery warning in about 90 minutes. Lastly there’s Bob himself. Fully voiced and wonderfully animated, I figured the game would basically revolve around him making it an engaging experience. At first, it seemed I was right. But while he gives a running play by play of the action, there’s zero personality or color commentary. He just says things like “you drew three cards,” “I raise 5,” or “you have a pair.” Just simple declarative statements with nothing interesting or funny added. His facial expressions are decent, but also repeat quickly and just fall into place.

I feel like not giving Bob witty things to pipe in with during the game was a missed opportunity. With the version of poker presented being one of the more boring ones, something needed to be done to punch up the fun. The ebb and flow of 30-80 dollar pots gets boring fast when you both start with a grand. Poker with Bob is a competent game, but I was bored after about 40 minutes and absolutely done about 40 minutes after that. If you’re a fan of poker, there are better mobile options out there.