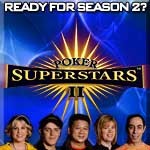 I used to be just like you. I used to think I was a pretty good poker player … that was until I had the chance to compete with some of the greatest players in the world in Poker Superstars II.

I went into Funkitron’s sequel to the most-downloaded poker game ever thinking I was pretty good. I was like most new kids on the block, thinking I had all the answers.

I was impressed, first off by the the digs they had set up, a great looking table, and easy-to-navigate menus packed full of Vegas glitz. Although the music was sparse, it occasionally came in at some intense moments, which really helped the tension. The few sound effects (card-shuffling, chip clinking) were nicely done too.

But what really sold me (and when I knew I was in trouble) was when I saw the poker masters I was sitting across from, the digital faces of Johnny Chan, Barry Greenstein, Cyndy Violette and several others that should be familiar to fans of Fox’s television show of the same name.

In the touch that makes the game, there are several different expressions for each player, so you’ll see them inspecting their cards, thinking about the best play, and reeling from a defeat.

It’s not just a gimmick, either. Getting beat by an actual person kept me coming back for more, allowing rivalries between me and the superstars to develop (if only in my imagination).

What’s better, you can actually import an image file of your choosing into the game, so you can see an image of yourself sitting next to all the superstars. The game also keeps track of your play style and your win-loss record, which was a big help to me in improving my game.

Of course, all the pretty faces in the world would help if the gameplay wasn’t there, but don’t fret. Luckily, Poker Superstars II has it, if you’ll forgive the expression, in spades.

Just when you think you’ve got the betting artificial intelligence (“A.I.”) down pat, it shifts on you. You might think it’s playing loose, betting on whatever comes down the line, and all of a sudden, your opponents’ play styles are tighter than a size 6 shoe on Shaq.

It keeps you guessing, and in a game like poker, that’s a necessity to hold your interest. The practical upshot was that I was beat handily at first and there was no secret trick I could exploit to play better. I didn’t start winning until I started playing better poker.

This is one of the factors that makes Poker Superstars II so easy to recommend to the novice. In addition to plenty of explanation of the rules, and even occasional strategy tips, the game can really help to improve your game of poker.

The other draw is that a loss at the table isn’t the end of the game. In the deep season mode, players will play several qualifying games before they get to the big show, which means a loss isn’t necessarily the end of your quest for poker superstardom.

(Don’t worry though, you can save and quit out of your game whenever your coffee break ends, and pick up right where you left off.)

So with such a slick package, how could Funkitron up the ante for the next iteration? I’d love to see them expand the superstar experience, maybe keeping tabs of a few other statistics or letting you spend your winnings on something (maybe a new ride to show up to the table in style.) Also, some beefing up of the limited music would be appreciated.

Finally, I would encourage the team to continue honing the superstars images, maybe allowing them to have tells that would allow eagle-eyed players to know when they’re bluffing. The occasional snippet of speech would also be a welcome addition.

The biggest challenge at the computer poker table is replicating what makes Texas Hold ‘Em so involving: the human element, reading your opponents. With digital superstars and a super advanced A.I., Funkitron may be the closest yet to overcoming that hurdle.