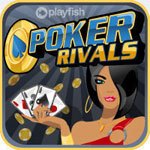 Over the last year or so one thing has proven itself time and time again in the world of Facebook gaming; where Playfish goes, Zynga follows. The inverse, of course, is equally true. And while both companies have dabbled in restaurants, farming and pets, Playfish has stayed eerily quiet on the poker front. Zynga Poker has been one of the most popular games on Facebook since launch, so it was only a matter of time until Playfish released its own five card stud. But does Poker Rivals go all in, or does it fold at the flop?

Unlike many poker games on Facebook, Poker Rivals makes a valiant effort to be accessible to new players. When you first boot the game up a quick tutorial will take you through the basics of texas hold-em poker (the only style you’ll be playing here). A handy help button in the corner will let you pull up a list of poker hands so that you can have a cheat sheet handy to learn the difference between a full house and a royal flush. Of all the poker games we’ve played, this seems to be the most friendly in terms of instructions and references for new players.

Instructions and references are one thing, but the game itself does suffer from a few pitfalls that make it a tad frustrating for newcomers to jump right into a hand with others. The biggest of these problems is the ridiculously short time limit you’ll have when it comes your turn. If you need to make a split decision between raising and going all in, and then have to confirm going all in with a separate pop-up window, there’s an incredibly good chance the timer will run out before you can place your bet. If that happens, you automatically fold. The short timer is a pain under the best of circumstances, but when trying to make a tough decision it’s downright infuriating. The timer also makes it impossible to focus on any other tasks while playing. If you want to participate in the group chat or buy one of your tablemates a virtual drink, you’re liable to accidentally fold a great hand.

The timer is understandable when playing at a full 10-seat table, but it somehow fails to get the game moving at the lightning speed you might expect. When you have a table full of people raising and folding, it can be a 5 minute process to get from blind to showdown. If you decide to fold when your cards are dealt, it can be a tediously boring time waiting for the next hand to be dealt.

Outside of the poker itself, Poker Rivals offers up a wealth of additional content to keep the avid social gamer coming back again and again. 35 achievements are waiting to be unlocked, ranging from the simple (win a hand with a high card) to the supremely challenging (win a 10 seat private tournament). Poker Rivals also provides you with an in-game avatar that you can spend your winnings on. Clothing, haircuts, and home furnishings await should you choose to go shopping for your digital counterpart.

avatar and profile are more than just in-game representations, though. Each can perform a variety of animations at your request. It’s silly, but it can help to break up the otherwise serious tone of the game. And while it’s doubtful they’ll ever be used to help you bluff other players (if that’s their intended purpose, it’s just a downright ridiculous idea) another system might help you to truly size up your opponents.

Players can be “tagged” with any number of keywords at any time by their opponents. Playing with someone who never folds no matter what their hand? Tag them as a “maniac” for future opponents to see. The more often a tag is used, the higher that rating becomes. It’s a genius way for players to get to know each others true styles, and helps to get rid of that room-full-of-strangers vibe most poker games offer.

While animations and avatars are great, at the end of the day Poker Rivals just feels like a run-of-the-mill online poker experience with a fresh coat of paint. Tagging other players is the real star here, and that definitely bumps this offering up a few notches in our eyes. But the pacing issues and time limits? That brings it down a few. Poker Rivals is a quality poker game – of that there’s no doubt. It just would have been great to have seen more true innovations like tagging and less generic ornamentation like playing avatar dress-up.