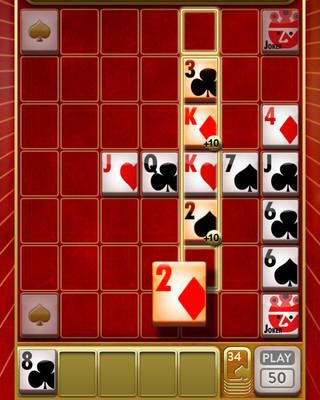 Have you ever played a game, and within moments of booting it up for the first time, realized that you’ve just stumbled upon something that’s destined to become the next big thing? I know I’m setting up lofty expectations here, but that’s exactly how I felt about Poker Pals even before I’d finished the tutorial.

Poker Pals is Chillingo’s first entry into the growing world of freemium casual asynchronous multiplayer, or to put it in words that are easier to swallow, “games like Words with Friends.” It’s a genre that’s becoming more and more popular lately – especially with iOS 5 allowing developers to implement this style of gameplay with ease – so it’s really no shock to see a big player like Chillingo try and establish an early presence in group. What is a bit of a surprise, though, is just how fresh and original this take on poker is. 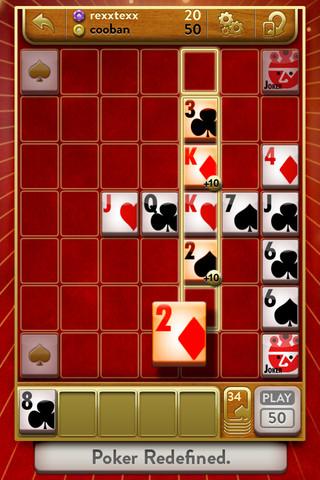 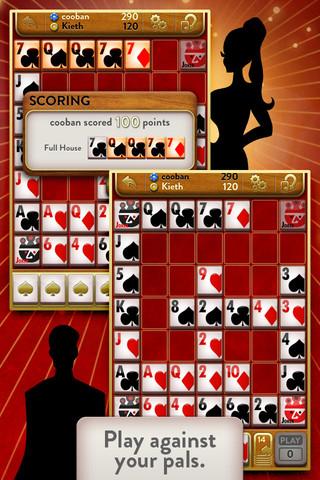 Poker Pals isn’t simply yet another game of poker – we all know there are a few too many of those to pick from on the App Store already. Instead it’s a wonderfully unique blending of Scrabble-style tile placement and poker rules. Players will have five tiles based on playing cards placed in front of them, and they’ll place these on the board in an attempt to make winning sets of five according to the rules of poker. Like Scrabble though, you’ll need to place your tiles in a way that connects with the existing tiles on the board. So if there someone has just made a hand with a pair of twos, for example, you could place another two next to them to get three of a kind.

The better you get at seeing opportunities, the more exciting the game becomes. Because the board will eventually be completely full (this is what triggers the end of the game), there will be plenty of chances for you to lay tiles in a way that make not one, but many winning hands in a single turn. Play like this can really see the points rack up, no doubt sending your opponent on the other side of the world into a tizzy.

Unlike most games of this sort that focus primarily on asynchronous online play, Poker Pals offers up a robust selection of playing options. Sure you’ll be able to play asynchronously against a friend or a stranger just like you can in Words With Friends, but there’s also a single player mode that pits you against an AI opponent, as well as a pass and play mode for multiplayer between two friends in the same room with only a single device.

But what’s really great about Poker Pals is that there’s enough strategy to be had that you’ll really find yourself thinking out the best move on each and every turn. Similar games like Words With Friends, Hanging With Friends, or PirateFleet For Friends definitely shine in their own right, but the turns require only a moment of thought at most. With Poker Pals, I found myself genuinely weighing my options on just about every play.

Freemium asynchronous games are getting more popular by the day, and there’s no question they’re here to stay. That’s why we’re so delighted to see that a company is taking this ball and running with it in a fresh new direction, rather than just taking the public domain games of our youth and porting them to a portable experience. Poker Pals is more than just a great new spin on poker – it’s a great step forward for the world of freemium asynchronous play.