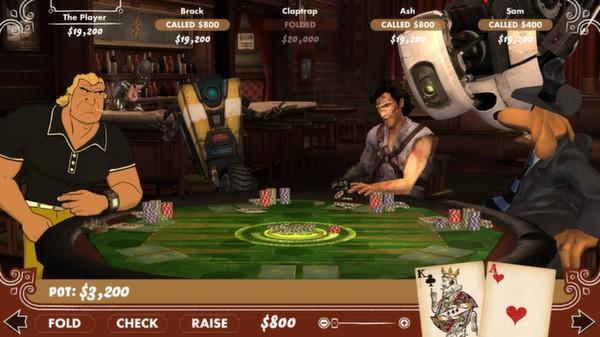 Just because Telltale Games won eleventy million awards (seriously, I counted) for The Walking Dead doesn’t mean their developers went all grim and gritty all the time. To prove it, they returned to their humorous roots with Poker Night 2, a game they describe as “the unnecessary sequel” to Poker Night at the Inventory. Play poker against some true characters, unlock some goodies and get ready to laugh.

Sure, you’ve gathered some buddies for a friendly game of Texas hold ’em, but it’s a safe bet you’ve never played with a group like the one in Poker Night 2. In the game’s intro, you’re escorted into the simultaneously seedy but classy card room at the Inventory by Brock Samson, the bodyguard to the Venture Brothers. Before long, you’re joined by three more recognizable faces: Sam from Sam & Max, Claptrap from the Borderlands series, and Ash from Army of Darkness. Once they cough up the $20,000 in cash to buy in, you get one more awesome addition when the dealer turns out to be GLaDOS from the Portal games.

As you can imagine with a cast like that, the dialogue is the star of the show, and the interactions at the table are worth the price of admission. Claptrap quips that the room looks like “Boardwalk Empire meets Silence of the Lambs,” quizzes Sam about being a dog and makes jokes about his mathematical abilities. Ash muses about needing money for his honeymoon fund, suggesting he may finally have found a love interest that didn’t die or turn undead. As you might expect, GLaDOS insults you and the other players in passive aggressive fashion. And that’s just scratching the surface, as the jokes and stories are plentiful.

You’ll probably be too busy chuckling to notice that each character has its own tells that may help you when the cards actually start hitting the felt. The truth is that you won’t need them anyway, as this is not a “serious” poker game in any sense of the word. The other players bluff wildly, push all-in easily, and generally play extremely loose. This is actually pretty nice since it keeps things moving, and it shouldn’t take you too long to get through a tournament.

Sadly, you’re not playing against the all-star cast for real dough, but you can earn Inventory Tokens to unlock decks, chips and felts. Even better, you can also earn cosmetic items for Borderlands 2 or avatar items and themes for your Xbox Live or PSN accounts. What you can win depends on what platform you’re playing on.

I reviewed the game on PC (through Steam), and the graphics and sound were top notch. The characters are all rendered in their native animation styles, so Brock looks like he’s still in a cartoon and Claptrap appears the way you’d see him in Borderlands. The voices are great, and there’s some subtle but jazzy music going on in the background that helps class up the joint a bit.

So is there anything not to love? Not much, except that this clearly isn’t the deepest game out there. Omaha has been added to lend some variety to the tournaments, but there aren’t any other options except playing against the same four opponents. Unless you are a bulldog who want to unlock everything, Poker Night 2 is solid entertainment, but it’s also very much disposable.

And that’s just fine, because not every game has to be some kind of grand epic. Kudos to Telltale Games for keeping it light and lighthearted and delivering an unexpected but very welcome sequel that almost certainly will make the repartee at your weekly game pale in comparison.