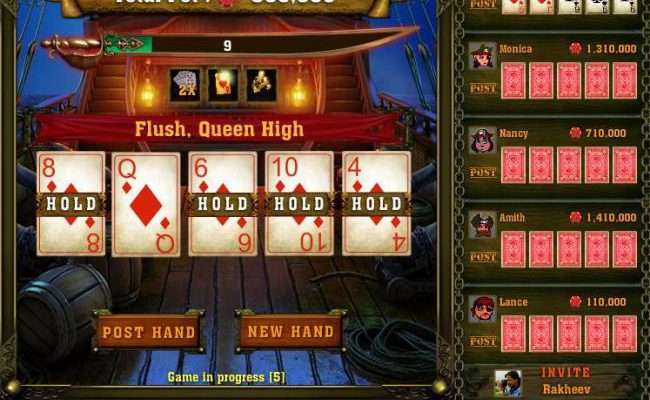 It’s a well-known fact that pirates are addicted to gambling.

Unless you’re a cartoon character with one of those light bulbs that comes on over your head, coming up with a truly new idea is hard. It’s even more difficult to devise a refreshing take on an old favorite like video poker, but Ruby Seven Studios gives it a go with Poker Best in 60 and mostly succeeds by giving it an extra sense of urgency and a multiplayer structure. And there are pirates!

The pirates are there not as a tribute to sweet-swinging Andrew McCutchen, but because Poker Best in 60 is part of Ruby Seven’s Tiny Pirate Casino series  for Facebook (and soon, for iOS devices too). All three titles take traditional casino games and give them social tweaks, in this case making a normally solitary game like video poker into something a little more interactive. 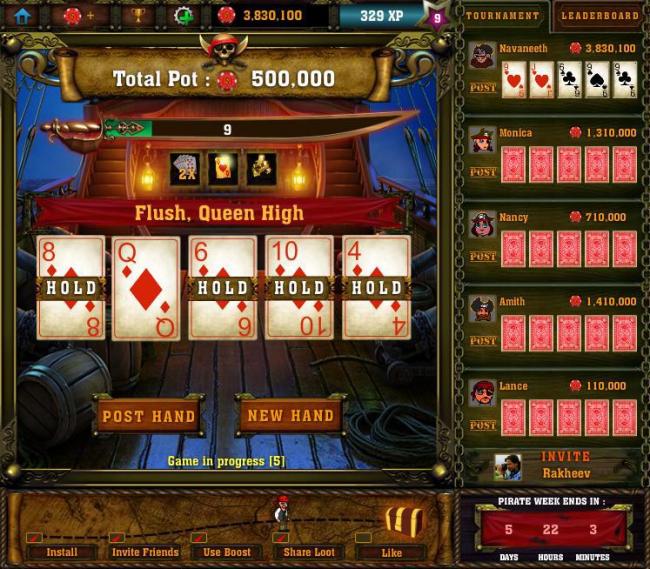 Primarily, that’s done by having you compete against four other players. Its standard draw poker where you are dealt five cards and get to decide how many you’d like to keep before drawing replacements for any you’d like to discard, just with four competitors doing the same thing simultaneously.

The swerve that gives the game its name is that you can toss your hand and start all over again as many times as you want in the course of a minute, hoping to get a hand that will beat every other player’s best hand. This adds an extra layer of strategy – those three Kings are good, but maybe its worth chucking them and trying for something better – and a feeling of panic when the seconds are ticking down and you still haven’t made anything. On the official M. Night Shyamalan Scale of Twists, this one isn’t quite The Sixth Sense but still comes in comfortably above The Happening.

Winners receive the wagers from all five players, and the game promptly proceeds to the next hand. On those rare times you feel comfortable enough to rest on a hand after 15 seconds, multiple choice trivia questions provide some side wagering fun. You can also choose to gamble on one of three different boosts to risk more for a greater potential reward in any given round. 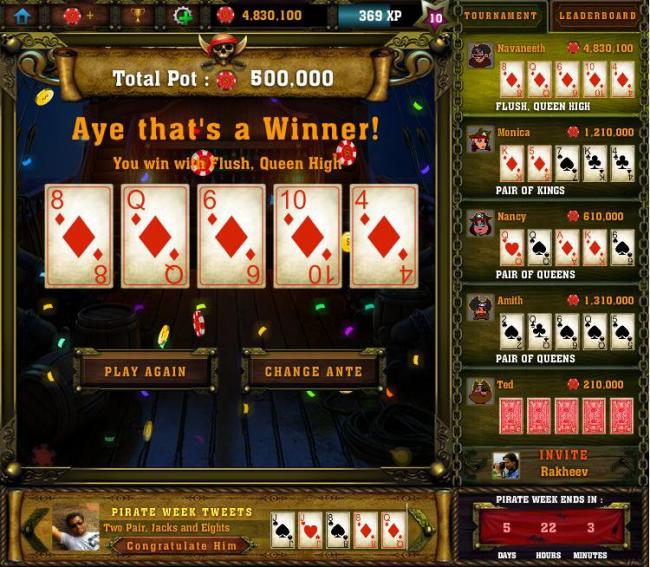 Poker Best in 60 tracks a number of achievements as well as stats like rounds played and won, best hand and career winnings. Friends can also be invited to play, and a Collectibles tab promises… something in the future. There are also some stock pirate phrases and emotes available for self-expression purposes, but an actual chat window would have made the social elements feel even more pronounced.

The game’s only real drawback is its lack of variety. Aside from moving on to higher stakes, there isn’t anything else to do once you’ve played enough to get a handle on what hands have a decent chance at standing up as winners. As part of a larger casino game, the gameplay here would be an A-plus component, but as a standalone title, it’s fair to wonder how many people may wish for something more to keep them coming back.

Then again, maybe players will see Poker Best in 60 as part of the overall Tiny Pirate Casino experience, which we won’t know until all three games are ready to go on both platforms. The Ruby Seven Studios team deserves a pat on the back regardless for its cleverness in turning video poker into a fast-paced, competitive affair. Just make sure you do it with your good hand instead of your hook.

Suburban Mysteries: The Labyrinth of The Past Review