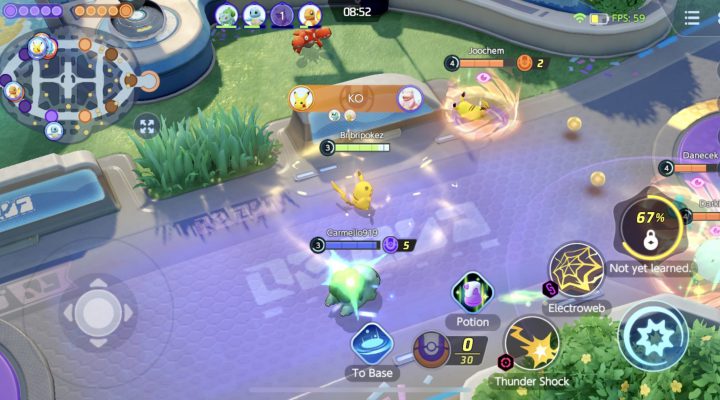 A deep MOBA that's easy to pick up

Can get a bit grindy

There have been a good few mobile games that have taken some of the shape of a MOBA over the last few years, picking and choosing aspects of the genre to make something simpler and, often, far less engaging. Pokemon Unite isn’t one of those. At least, not quite.

No, it doesn’t have the meat on its bones of the likes of League of Legends: Wild Rift, but it doesn’t fit into the category populated with the likes of Clash Royale, either. It’s more than a snack, less than a full meal. Pokemon Unite is basically the brunch of the mobile MOBA world.

You pick a Pokemon, then battle it out in 5v5 scraps to capture Aeos energy. You get that for killing NPCs and other players, then you can smash it into tower-based goals to score points. Get enough energy into a tower and you’ll destroy it.

There are other wild Pokemon that pop up from time to time that can give you an edge if you kill them. Some offer boosts, others will take down a tower’s defense and leave it vulnerable. Take down Zapados in the centre of the map and all of your enemy’s towers become weakened for 30 seconds.

The maps are split into two lanes, with a jungle section in the middle, and the battles ebb and flow nicely. Towers grant you protection in the form of HP regen, but they won’t attack enemy players like they do in a lot of other MOBAs.

Different Pokemon have different skills and roles to perform, and learning what’s what is the key to success. You’ll unlock a few during the first couple of hours of play, and there are more to be collected if you put the grind in.

And you probably will. Pokemon Unite flashes moments of brilliance, and the battles always feel like they’re balanced on something of a knife edge. Is it perfect? No, some of the IAPs do feel a bit pay-to-win, and the roster of characters isn’t as expansive as MOBA fans might want. But when it works, boy does it work.