Home / Reviews / Pokémon TCG Online Review: All in the Cards

Pokémon TCG Online Review: All in the Cards 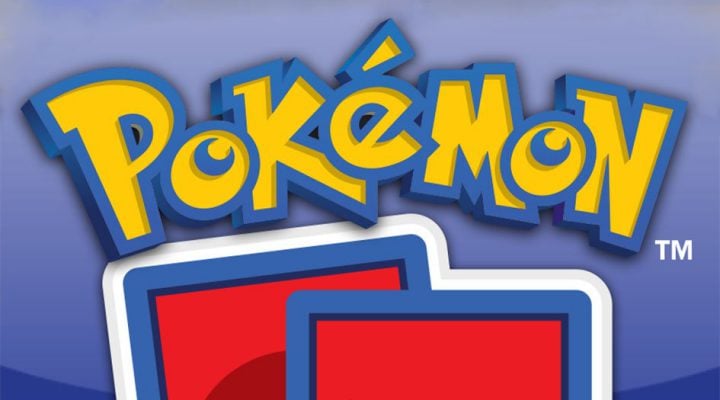 It's an extremely comprehensive experience, the full desktop version brought to iPad.

That full experience winds up being a bit ill-fitting for iPad.

There's a lot to take in for new players, as this digital version of the game has been running for several years already.

Pokémon TCG Online is kind of like Hearthstone, in that both are PC collectible card games that have been brought to the iPad. But, honestly, that’s where the comparisons end. Where Blizzard’s card game is a fantastic example of how to make a cross-platform CCG that’s friendly to newcomers as well as veterans, Pokémon TCG Online by its nature is geared more toward the veteran player than the newcomer.

As you can probably gather from the name, Pokémon TCG Online an digital adaptation of the Pokémon Trading Card Game that’s been around nearly as long as the video game series, and has evolved to this day. The game has a lengthy tutorial explaining how the systems and decks all work, but the short version is this: the game is set up like a Pokémon battle, where one creature fights another (each with different abilities), a players will switch pokémon out when hurt. 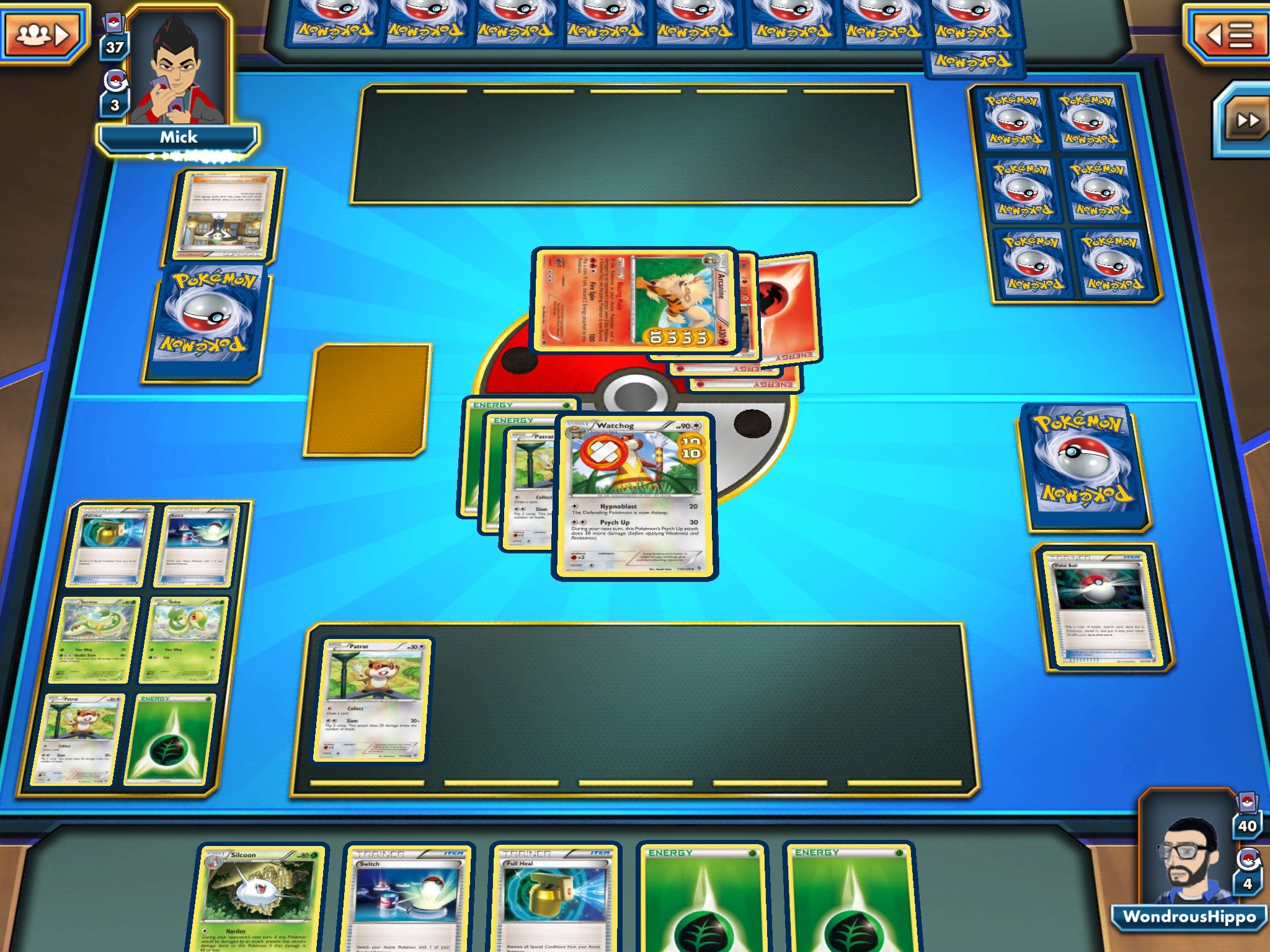 But instead of having a set team,  pokémon are determined based on the cards that are drawn, with different cards for evolutions, energy cards to help unlock certain moves, and trainer cards that have effects such as healing or drawing more cards. The best way to understand how it all works is to play it.

The experience jumping in for the first time can be a bit unfriendly, and registering an account might require logging in to the pokemon.com site to finish it. While it’s possible to play as a guest, registering is a good idea because it’s possible to continue progress on the desktop version of the game or to transfer progress from it. Still, the user experience could be better.

Also, it’s not possible to buy coins, the currency used to buy new decks, and packs of cards, from the iPad version. You have to do it from desktop at the moment, or be in Canada. Still, there are ways to unlock pre-set decks in the single-player alone, and coins can be earned through playing as well. 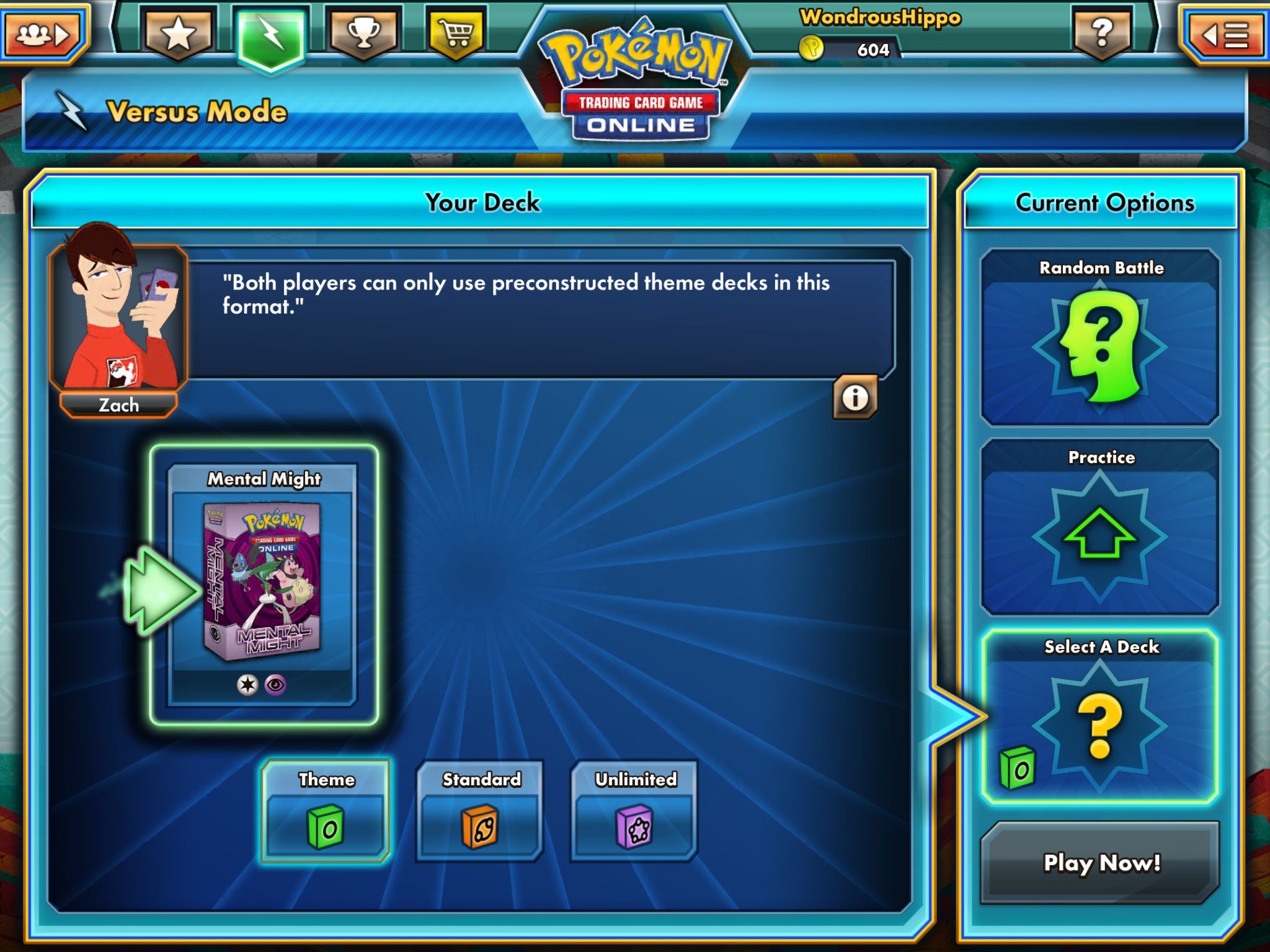 The game may be based on Pokémon, and luck plays a huge role (as it does in any card game), but there’s definitely strategy in the game that can be picked up on as to what’s smart to play and when, and how to make a good deck. The deck wizard could provide more options for my taste, particularly with trainer cards, but it provides a good starting point for those who want to build a deck around a couple of cards, and to then iterate from that.

The game boasts both the singleplayer Trainer Challenge, which can unlock premade decks through continued success, and an online versus mode against random players, friends, or even just the computer if testing out a deck, with both ranked and unranked play. There’s also the ability to play just with themed decks, with decks that conform “current Standard legal expansions,” or unlimited mode which can be any legal deck. The game does indicate when making a deck what’s legal and what’s not.

After some significant time playing Pokémon TCG Online, I feel like it’s still a bit daunting. Hearthstone is so great because it’s friendly enough to get players to understand how it works, ot hold their hand into a point where they feel comfortable playing online against folks and customizing their decks. Pokémon TCG feels exactly like I do when I walk into a craft supply store. I’m confused, I don’t know what anything is, I just want to find some frames for prints I bought, please get me out of here. There’s just so much of the game and world already established that I don’t quite have a good feel on what anything is. 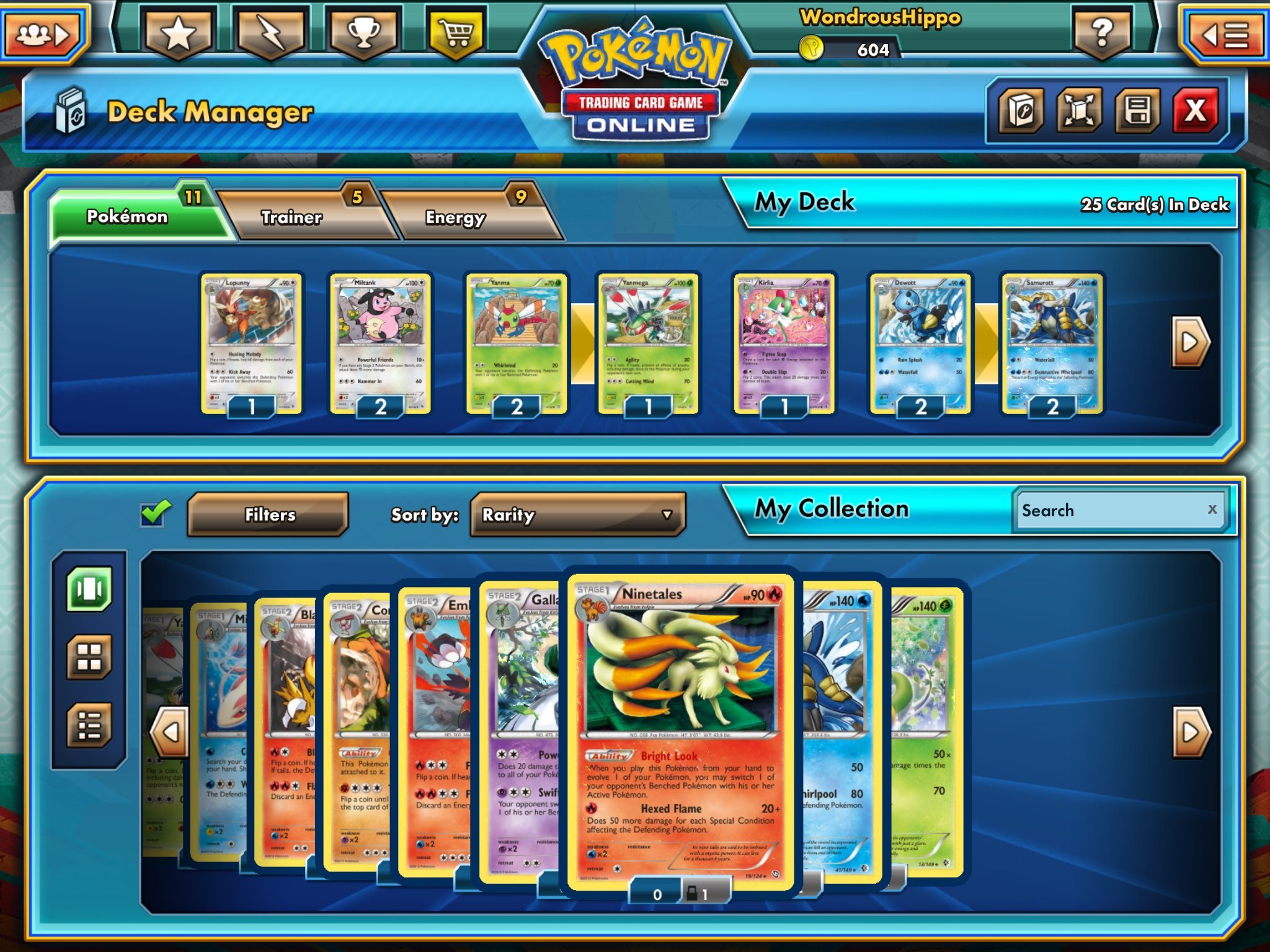 To a certain extent, this game is almost friendlier if you go in knowing nothing about Pokémon or how anything works, similar to how I’ve approached Hearthstone. An open mind can go a long way.

But how friendly each game is comes down to the games themselves too. Hearthstone was clearly meant for tablets at some point, particularly with its touch-friendly interface and speedy pace of play. Pokémon TCG Online is a desktop game that was ported to mobile. Games can be over in 2 minutes, or in 22. Hearthstone’s matches can be long, but there’s certainly more consistency to the expected length of a game. Here, you can either have a match end quickly due to a bad draw, or be in for a long slog.

The interface causes problems too: why are double-taps the commands used to view cards, and single-taps to use them? There is an undo function, but it just feels like a risk to even try to view any card. And during my play time, there were more than a few times where a card didn’t load its image at all while playing. In a game where elemental advantages and knowing what your opponent is playing are important, not being able to see that info if you’re on a slow connection or if the game’s acting up is absurd. 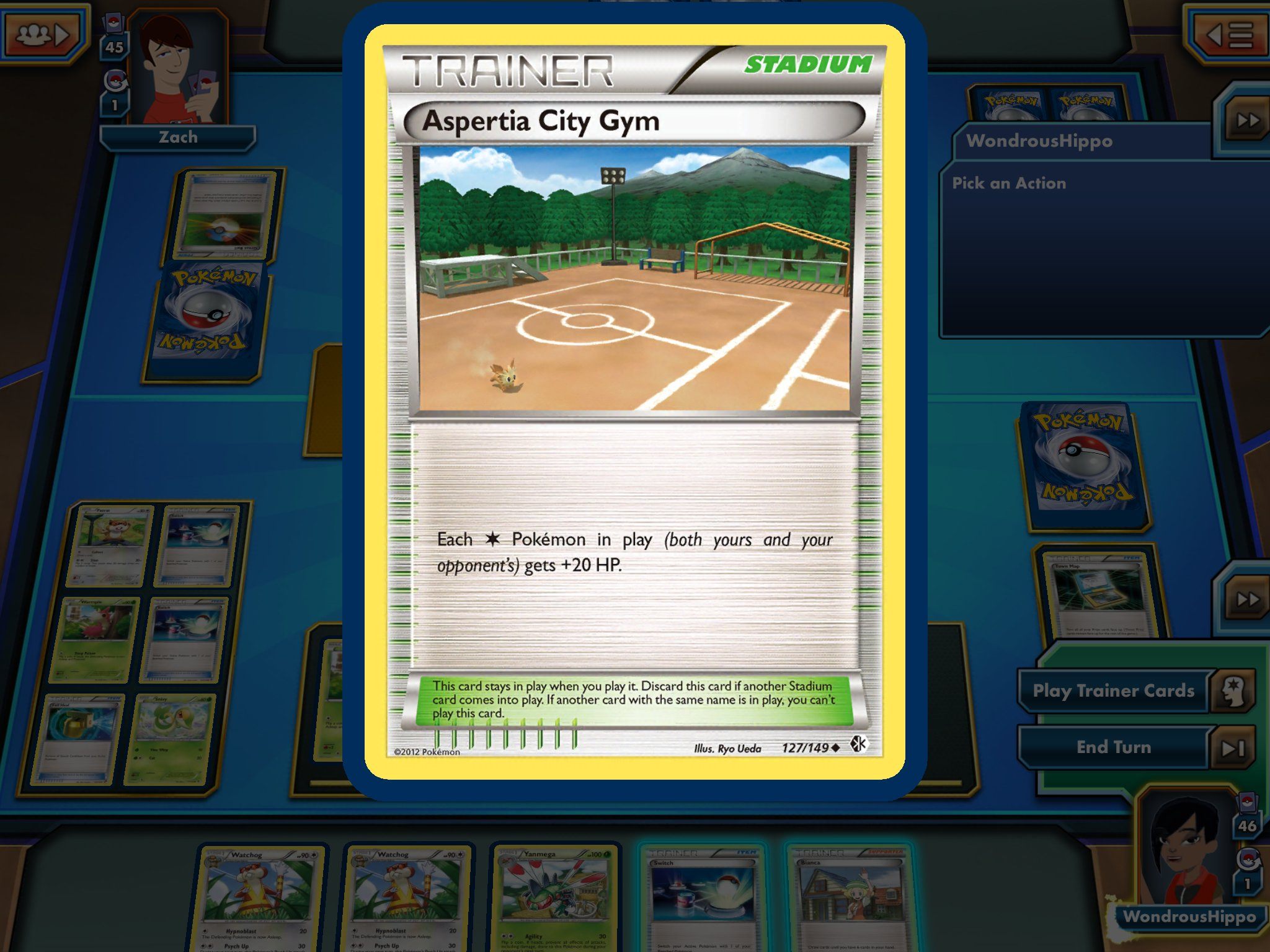 Pokémon TCG Online isn’t bad; it’s just “a game stuck on the iPad” versus a game made for iPad that also exists on other platforms – and it shows.

For people who are veterans of Pokémon TCG Online, I’m sure they will enjoy having the full game at their disposal wherever their iPad has a stable internet connection. The game is online-only, even for singleplayer, but given the nature of the card-collecting that’s somewhat understandable. For people jumping in for the first time, be prepared to enter a world that will seem somewhat daunting. The game explains how it plays, but there’s a lot to get acclimated to here. There are plenty of rewards for those who dive in, but I still think Pokémon TCG Online’s entry to the iPad could have been smoother.