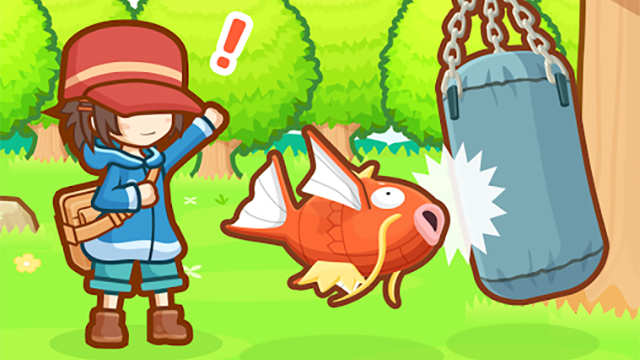 Playfully pokes fun at Magikarp while making it completely lovable and worth training.

Leagues provide concrete goals and rewards to work toward while leveling up over time.

Different Magikarp patterns to find, Pokemon to meet, and items to unlock provide plenty of things to upgrade and collect.

Economy is extremely generous, with no ads and coins doled out frequently.

Very limited gameplay interaction; the most you'll do is tap food for Magikarp to eat.

Risk versus reward of completing certain random events is too high.

After the release of the mega-successful Pokémon Go with partner Niantic in 2016 and digital board game Pokémon Duel earlier this year, we assumed the next game from the Pokémon Company would follow closely in these predecessors’ footsteps: a who’s who of collectible Pokémon players could catch, train, and pit against each other in some fighting format. Instead, their latest release focuses entirely on one species of Pokémon—the weakest, least battle-worthy out of the entire 800+ roster—and its dreams of literally flopping its way to semi-glory. The ridiculousness of this unexpected protagonist is a recurring theme, giving the entire game a lighthearted, tongue-in-cheek sense of humor that is both charming and surprisingly endearing, making even Magikarp’s smallest jumps into momentous victories.

Magikarp Jump begins with your recent move to Hoppy Town, a city whose entire population shares an unusual love of Magikarp. Instead of battling Magikarp, however, the townspeople raise them to compete in jumping leagues. Mayor Karp has called upon you, an expert Pokémon trainer, to conquer these jumping leagues and help motivate the local Magikarp to train harder and jump higher. 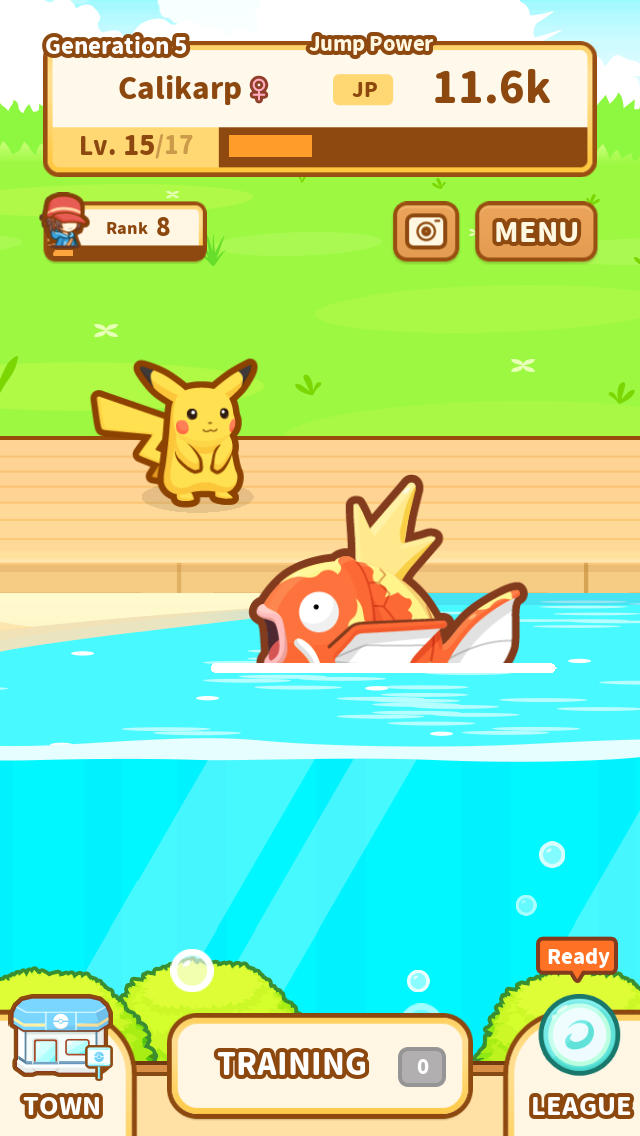 After fishing up your own Magikarp, you’ll begin training to improve its Jump Power (JP). Most of its time is spent swimming around in your pond, eating berries that sporadically appear in the water automatically. You have to tap the food to direct Magikarp to eat, and each food item it nibbles increases its JP slightly. You can also conduct training sessions outside of the pond so long as you have training points available. These involve simply receiving a random type of training and then tapping through the cut scene as your Magikarp completes it—tackling a sandbag or jumping into a jump counter, for instance. Training sessions reward much greater JP but are available less often since you have a limited number of training points available and these take time to respawn, unlike food which materializes in the pond constantly. After training you may occasionally happen upon a random encounter which will offer you a choice—examine a mysterious Pokéball or leave it alone, jump up to grab some fruit from a tree or flop away empty-handed—with outcomes usually varying between JP or coin rewards, as well as some unexpected surprises.

When not eating or training, you can enter your Magikarp into League Battles to test its jumping abilities against other Magikarp. Like the training sessions, these primarily involve tapping through cut scenes and watching the action unfold before receiving the results. Each League contains a series of increasingly difficult A.I. Magikarp to jump against whose JP grows as you progress. So, while you might be able to win the first few battles with only 1,000 JP, later Leagues will require ten times this Jump Power to claim victory. Since there’s no player input in these matches besides tapping the “Magikarp! Jump!” button, they really become a numbers game: if your opponent has a higher JP than you, you’ll likely lose.

The overarching goal of the game is to raise Magikarp with high enough JP to win all eight Leagues. However, since Magikarp have a max level they can reach, this becomes a multi-generational objective that requires you to raise many different Magikarp over time. When a Magikarp reaches its max level, it’s allowed to finish its current League or compete until it loses. After that, the Magikarp “retires” to the back of your pond and you begin training a new generation. As your trainer rank rises—by earning EXP in League Battles and through retirement—you can fish up Magikarp with higher max levels, increasing the highest JP your Pokémon can achieve. This also improves the Magikarp motivation meter, improving their growth rate by 10% for every generation that successfully reaches retirement.

This is, for the most part, fairly standard clicker gameplay. There’s a lot of tapping, leveling, and prestige restarting. You can spend coins and diamonds to upgrade your food and training sessions so they award more JP. If you’re out of training points and not strong enough to win your current League Battle, there’s not much else to do other than wait for the points to refill or focus on the much less lucrative eating option. We wish there was a bit more interactivity, even if it was something as simple as tapping to control your Magikarp’s efforts during training sessions. 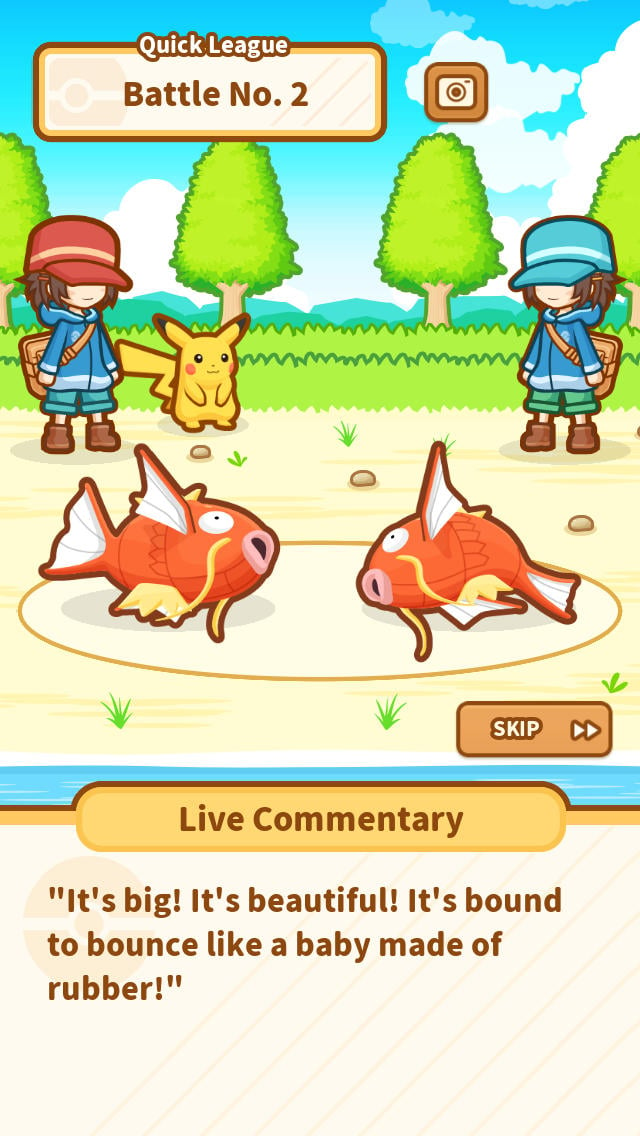 But the clicker gameplay is wrapped in such a charming, polished, and lovable package that we don’t really mind having inactive downtime with our Magikarp. For one, Magikarp itself is simply adorable, with its unblinking bug-eyed look of perpetual confusion and pitiful flopping persisting even as it grows bigger and more powerful. The irreverent and tongue-in-cheek tone is present throughout, from the very beginning when Mayor Karp reminds you this is a Pokémon “famous for being weak and pathetic and utterly useless…” to the random events that show Magikarp using its pointless Splash attack (to no avail) to the sometimes truly tragic results of Magikarp’s ineptitude. Little details, from other Pokémon hanging out by your pond to cheer Magikarp on to your retired Magikarp floating by in the background to the recognizable Pokémon series music and sound effects, all elevate this to something more than just a gag game.

And while Magikarp Jump has more in common with a pet simulator than the series it’s spun off from, it still manages to emulate many of Pokémon’s recurring features. Getting progressively stronger to conquer the League Battles; catching new and different variations of Magikarp to add to your pattern dex; knowing when it’s time to move on to the next Pokémon: all of these contribute to the rewarding sense of growth and collection that should appeal to Pokémon fans and non-fans alike. If you enjoy these aspects of the series, event-based clicker gameplay, or the Magikarp Song that has been linked directly from the in-game TV, then you’ll almost certainly love Magikarp Jump.

Echoes of the Past: Wolf Healer Review – Best. Bracelet. Ever.