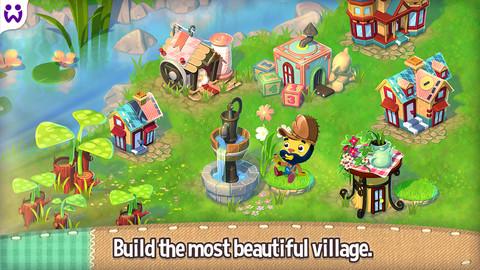 There are worse places to hang out, but Pocket Village doesn’t exactly offer a taste of an exciting life.

The name “Pocket Village” evokes an image of a peaceful hamlet with sunny mornings, rolling hills, and close neighbors (and closer cousins, cough cough). A nice place to visit, perhaps, even if you’re just rolling through to grab a hamburger before hitting the Interstate and gunning it to Disneyland. However, wooga’s Pocket Village is actually an iOS town-building game that demands some pretty hardcore labor from its adorable population. It’s easy to feel bad for the little guys, but don’t worry; Pocket Village moves so slowly that it won’t be long before you abandon its population, anyway.

Pocket Village puts you in charge of a passel of “Pocketeers,” little humanoids that look like a cross between teddy bears and human beings. Pocketeers are hardy workers, and are ready and willing to clear away the debris littering their village. Said debris can be harvested for necessary resources: Rocks yield minerals, which can be refined into metal, which in turn can be made into nails, hammers, and other items necessary for building things. Wood can be chopped down and turned into planks, which can be used for certain projects. Berries can be harvested and made into juice.

Most importantly, all the resources that you gather can be sold back to the trader, who’s a constant presence in Pocket Village. It’s the only way to make money; unlike many village building games, you don’t collect rent from your citizens. Selling off the stuff you gather is your primary way to make coin.

Other than the added challenge that comes with sorting your resources for project or sale, Pocket Village is a pretty typical city building/item gathering freemium game. That means, more than anything, a whole lot of waiting around. Chipping away at rocks takes time. Refining resources takes time. Chopping down trees takes time. Building houses takes time. Exploring new territory takes time—and it also takes up a great deal of money and resources, both of which take a whole lot of time to scrape up. Not surprisingly, you can jump to the front of the queue if you hand over some diamonds, which serve as the game’s hard currency. 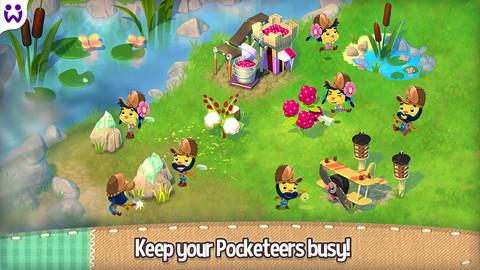 You might not even want to be bothered, frankly. Pocket Village is cute, to be sure, but it’s also kind of boring. There are few decoration options for your town, and curiously enough, most of them can only be unlocked at high levels. The visuals are also a little disappointing: The game utilizes an art style that is reminiscent of different kinds of fabric. Houses appear to be made of cloth and denim, all stitched together with thread. It’s charming, but also under-realized. The characters look the same, and the patterns for the houses and environments repeat. This is no Kirby’s Epic Yarn.

Pocket Village wants to be loved, but it doesn’t exhibit many loveable traits. It’s not awful by any means, but it’s slow, repetitive, and ultimately unoriginal. If you’re a collector of village building games, Pocket Village might please you for a time. Otherwise, don’t bother putting the Pocketeers to work.  Let ’em loaf.