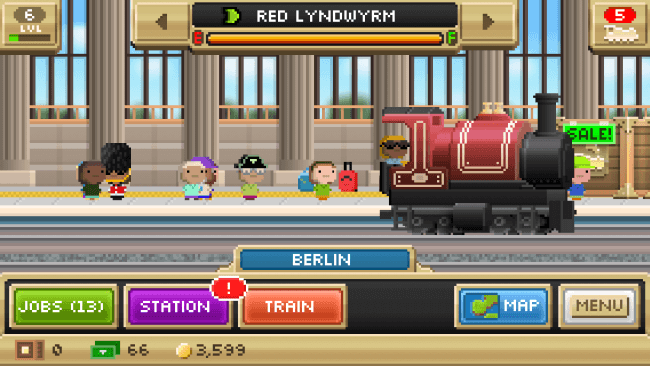 All aboard for good times with tiny trains

Open wide: Here comes the choo-choo train. In other words, clear your schedule because NimbleBit’s done it again. Pocket Trains is the charming, highly addictive follow-up to last year’s Pocket Planes. Like its predecessor, Pocket Trains is a lightweight simulation game that puts you in charge of heavy machinery and shipping routes. Admittedly, if you didn’t enjoy Pocket Planes, nothing about Pocket Trains will appeal to you. Regardless of how you feel about NimbleBit’s games, however, there’s no denying the studio knows how to package freemium content fairly and compellingly.

Pocket Trains puts you in charge of your very own railway (you don’t get one of those cute engineer outfits, but you can pretend). You begin with a couple of engines and short shipping lines centered in Europe. If you stay vigilant, you’ll have veins of rails reaching across Eurasia, Oceana, and even North America.

True to NimbleBit tradition, however, you start small: all the better for showing you the ropes. The action in Pocket Trains revolves around making deliveries for cash (including cars filled with syrup and giant jars of pickles). The larger and longer your haul, the bigger your reward.

Each train is restricted to a single line, so you need to think carefully before you expand your railroad empire. If you’re not paying attention, you may waste a strong engine’s potential by restricting it to a tiny section of track stuck between two cities. Sure, you can correct mistakes, but it costs. In fact, getting ahead in Pocket Trains takes a great deal of the game’s soft currency (coins), so it pays to be vigilant in checking your lines frequently and sending out trains for another haul as soon as they pull into the station.

Neither can you charge ahead like a runaway locomotive, however, as your trains have limited fuel. Fuel refills slowly when a train is in a station, but you can also refill for a couple of “Bux” (the game’s hard currency). As in previous NimbleBit games, Pocket Trains is quite generous with handing out Bux. It’s rare to feel pressured into buying more through in-app purchases.

That’s one reason why Pocket Trains is a very rare example of a free-to-play game that doesn’t feel like a free-to-play game. Panhandling for microtransactions is nearly non-existent. No online connection is required to play. The wait times between supply hauls are fair, especially in the early hours of the game. If you do choose to wait around, you can tap at coins, supply crates, and Bux that float past your train as it speeds through the countryside. 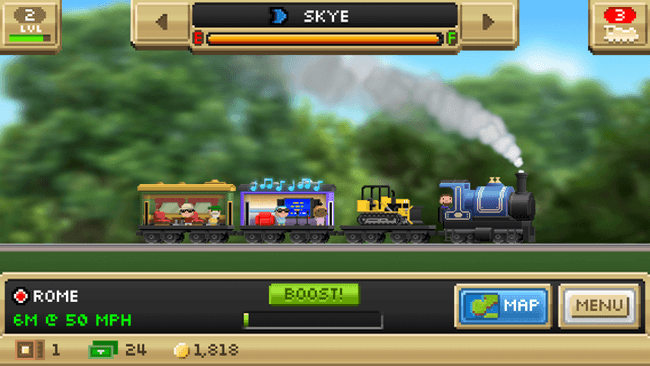 Pocket Trains supplies a relaxing soundtrack that’s perfect for riding the rails by. NimbleBit’s Bitizens are as cute as ever, too; rest assured, they’ve packed their dinosaur and bunny suits for their train rides. And if you don’t melt a little every time a Bitizen yawns, you should probably see a man in Oz about a heart.

Pocket Trains sticks close to NimbleBit’s successful Pocket Planes and Tiny Tower, but it’s not hard to understand why. This is a fun ride, and best of all, it’s free.