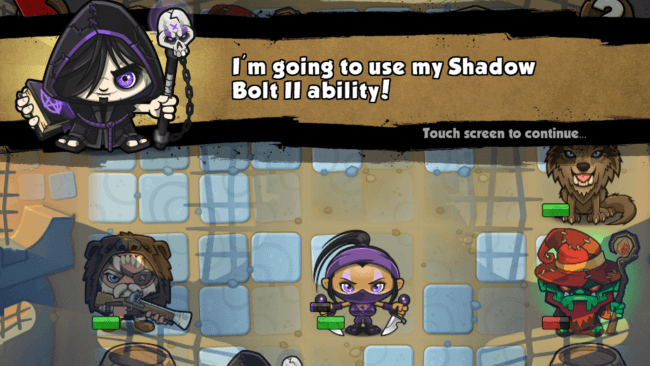 Known for convoluted skill trees, multiple-layer menus, and complex gear load-outs, role-playing games can be daunting to the casual gamer. With Pocket Titans, new indie developer Noisy Orc Games removes much of what generally bars the way for players unfamiliar with RPG mechanics. What’s left is a fast-paced, streamlined fantasy role-player that, though repetitive and largely automated, is a fine introduction to one of the game industry’s most venerable genres.

Briefly, Pocket Titans‘ narrative involves a group of young apprentices attending the Titans Academy where they hope to become full-fledged heroes. The gameis built upon a foundation of fantasy archetypes, but rather than coming up with thinly-veiled terms for them, Noisy Orc presents them as literally as possible. For instance, characters announce themselves not with bombastic titles like “Tim, the Nefarious and Deadly Enchanter,” or “Rothelm, the One-Eyed Orc-Beater,” but simply as “Mage” and “Warrior” (or Healer, Ranger, Paladin, Hunter, Warlock, and Rogue). 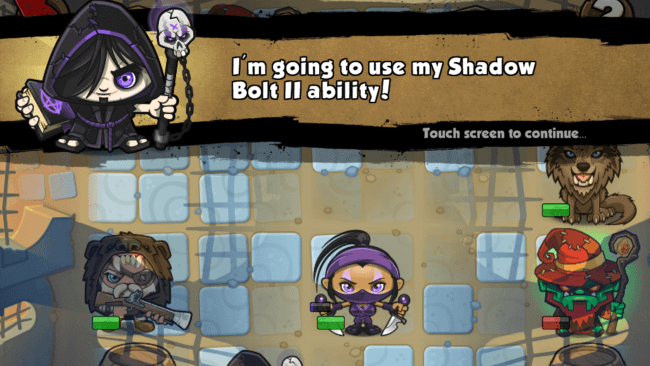 These practical-minded mercenaries sign up to help their king defeat an evil Orc horde, and as such, must fight their way through swamps, skeleton-filled passes, and forests until facing down the Orc King in his castle. In a typical role-playing game, this process would be fairly elaborate. Before battle you’d choose your party members, equip them with the best weapons and armor possible, set them to perform certain actions by assigning their skill points, and maybe even spend time crafting healing potions and other useful items. Some gamers love this kind of micro-management, but for others, it’s an unnecessary delay that prevents them from jumping into the action.

Pocket Titans removes the majority of this administrative activity by automatically assigning skills and gear to your characters. Although you do get to choose which of your party to take into battle (of eight, you can generally only take two or three at a time), you’re more or less unable to control what they wear, what they do, and whom they attack. What you can control, however, is where they and the enemy move. This is where things get interesting, because Pocket Titans trades the standard movement set-up for something akin to that used in match-three games.

Generally in turn-based combat, characters move around on a static board, and different characters move different distances and directions. Pocket Titans flips the script on this approach by keeping the characters static and moving the board. Just as in a match-three game, each row and column of the 5×5 board slides, carrying its occupying combatants along with it. This allows both friendlies and enemies to be repositioned, not to mention obstacles like rocks and barrels that can be used to strategic effect. This is a creative, fresh addition to turn-basedcombat. 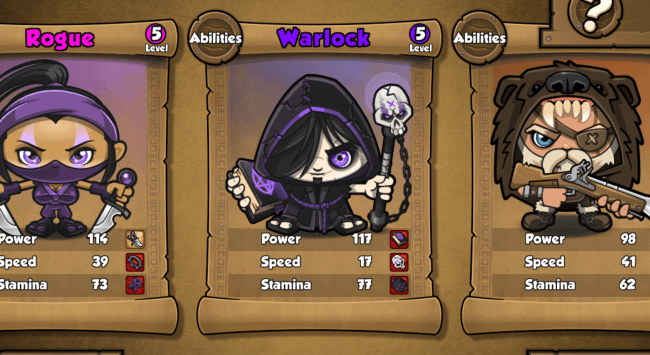 Combat itself,though mostly automatic (there’s the occasional need to frantically tap the screen to power up a character’s attack), is fun and looks pretty good. And though the game’s saucer-eyed characters are a bit on the cutesy side, the look of the enemies is impressive. Both action and graphics are well-supported by simple, dynamic music and funny sound effects (characters sound like dyspeptic gremlins when they’re hit). These are all the things Pocket Titans gets right. There are, however, a few things that could be better.

Role-playing games are known for their complex stories, and although no one’s expecting Pocket Titans to be Final Fantasy, it wouldn’t hurt if its young Titans were more defined, and if they exchanged something more than a few generic quips. As it is, combat gets repetitive after a while with only small narrative chunks to alleviate it, and the multiplayer mode does nothing to mitigate that. Moreover, multiplayer plays exactly the same way as single player story mode, albeit with real-life opponents controlling the enemy. All told, the only thing to be gained by engaging in multiplayer at all is leaderboard standing. 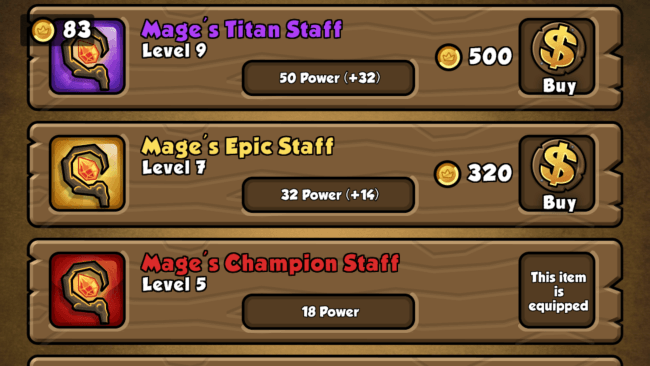 Finally, as obvious as it might be, it should be said – Pocket Titans is not for the die-hard role player. The game takes away the majority of your control and that means characters sometimes heal one another when you want them to attack, or use a different attack than you’d like them to. Also, shopping for gear isn’t all that much fun, since there’s no manual equip and no way to sell anything back to get money. This, presumably, is to nudge players to spend real world cash to buy in-game gold. Gold comes in packs ranging from $3.99 for 1000 to $11.99 for 5000, but with shopping as unexciting as it is, it’s hard to imagine wanting to buy any.

Pocket Titans is a fun little role-playing game, especially for only $0.99. It’s cute, lively, and the match-three movement gives it a strategic puzzle element not usually found in RPGs. For gamers new to role-playing, it’s the perfect way to learn the RPG basics. Role-playing veterans, though, could easily grow impatient with the over-simplification of their beloved genre’s complicated game mechanics.