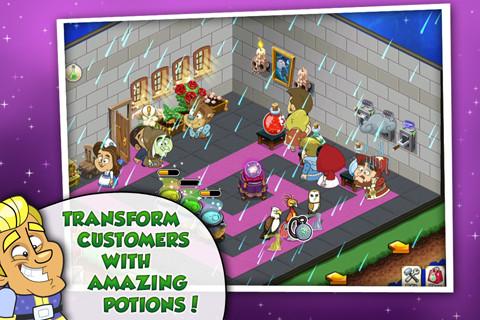 Business simulation games are fairly common within the mobile space, and the latest one to be added to it is the title of Pocket Potions. Developed by Breaktime Studios, the application allows players to manage their very own mystical potion shop. Hosting a handful of only slightly new game mechanics, most of the differences come from the overall presentation. That said, these differences are more than just a visual reskinning of an older game, but a unique style all of its own.

Players start out by inheriting their magical potion shop from their Fairy Godmother, with the idea of turning the tiny little shack into a bustling business. The game is not too difficult, and if players have every played social games like Restaurant City on Facebook or anything from TeamLava on iOS, they will know exactly what to do here. It all comes down to brewing potions, putting them on display, and keeping customers happy.

In order to brew a potion, various ingredients are required that can be either grown or bought directly from the in-game store. In terms of the former, these sprout off of plants and animated pets and can be â€œharvestedâ€ every so often. However, plants and pets cost a virtual currency called â€œGemsâ€ which are bought in $0.99 – $24.99 increments. That in mind, most players will probably buy the packs of ingredients for earnable, in-game coin from the store.

Once ingredients are gathered, players will be able to brew any number of mystical concoctions ranging from Love Potions to Hair Tonic. These are created simply by tapping on a cauldron given to the player at the start of the game (more can be added as users level up) and selecting a recipe in which the ingredients are available. After a few more taps on the cauldron to add the ingredients and stir the pot, the potion will begin brewing. Depending on the level of the potion, it will take anywhere from 30 seconds to several hours to make. Should the player not return in time to bottle it — and this is a significant negative for the game — it will â€œspoilâ€ and become unusable.

Assuming players returned in a punctual manner, the potion will then be placed on any empty tables the player has purchased. Customers will then come in and buy it. So long as they are always finding what they need, the reputation of the store will increase, and in turn, more customers will arrive. Additionally, some customers will ask for help (represented by an exclamation point above their head), and players will need to tap them, then tap on the potion they are seeking. What is also worth mentioning is that, as customers use the various potions, they will not only pay coin but also grant experience and random ingredients. 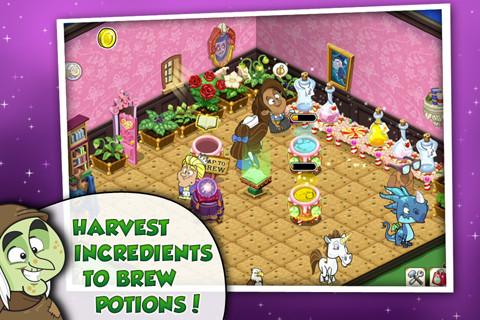 As a social element, players can invite friends and add other users as neighbors. It is fairly standard, but what is a nice bonus is that players can visit other users via a random selection of the Pocket Potions community. While visiting other players, it is also possible to â€œLeave a Gift,â€ which increases a â€œKarmaâ€ rating for the player that left it. The game is slightly tight-lipped on what this does, but it looks to work similarly to games like Bakery Story. This means, the higher a userâ€™s Karma, the more likely their store will appear near the top of the community list of players when another user visits the gameâ€™s social tab.

The real uniqueness to Pocket Potions is in its presentation. Aesthetically, it does have a different look than other business sims that are either hotels or restaurants, but more than that, the game has a bit of discovery to it. Itâ€™s not incredibly deep, but as players level up and unlock new potions, it will have bizarre and interesting effects on the patrons that use them. These are often quite amusing, and ideal for a younger game audience.

All in all, Pocket Potions isnâ€™t the most unique game concept in the world. In fact, itâ€™s one thatâ€™s been done to death. Nevertheless, it is well made, and has a rather strong presentation value and style to it. The only real game play drawback is that potions can spoil if players donâ€™t return in time; an annoyance that many developers are now doing away with. Taking all of this into consideration, if youâ€™re looking for an original game, Pocket Potions is one to pass on. However, if you enjoy these social simulation apps, then it might be worth checking out. As a free-to-play game, it doesnâ€™t hurt to try.