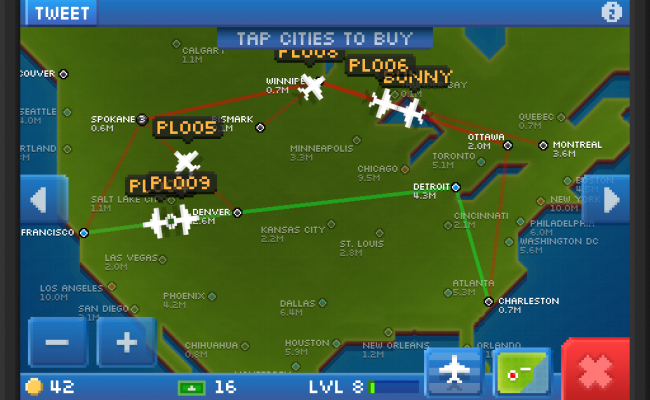 With Tiny Tower, Nimblebit created something rare in the world of iOS: a phenomenon. Downloaded over ten million times, awarded Game of the Year by Apple themselves, and widely billed as an addictive substance, their micro-business sim set the bar – not only for the genre, but for themselves. So when the brothers Marsh announced they’d once again be returning to the iconic world of the bitizens, the stakes were high. I guess it’s a good thing they brought planes this time.

From small shops to the big time, Pocket Planes ditches the mom and pop stores in favor of a larger goal: run the world’s best airline. But as with Tiny Tower, great things come from humble beginnings. And so to start, you’re given only three planes and three airports to watch over in your favorite region of the world. From there, it’s your job to transport the passengers and cargo necessary to boost your profits, and spend them on the expansion of your fleet.

Right from the get-go, Pocket Planes feels like a distinct bitizen experience. Certainly, there’s a familiar element of micro-management as you select each plane’s load and see it off to its destination. And yet there’s much more macro at play here. Because it’s one empire you’re building, you’re not nearly as concerned the individual cogs so much as you are for the role they have to play. 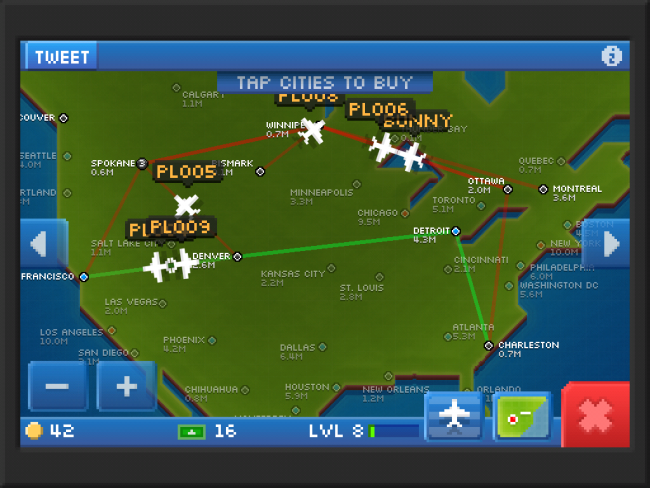 Where in Tiny Tower you became quickly invested in Bill and his aspirations for a career as a frozen yogurt artist, Pocket Planes transforms you into the entrepreneur. Strategizing your next airport to maximize efficiency; choosing planes that will net the most profit when they fly, and always thinking two steps ahead to expand operations. In the best way possible, the game often feels like a relaxing, single-player version of Risk: a play-at-your-own-pace take on world domination.

With that said, If I you’re worried about it feeling dry or obtuse, let me stop you right there: don’t be. Once you’ve flown one pair of passengers in the tutorial, you’ll be well equipped to play pretty much the entire game. Booking flights, opening airports, managing passengers? All of it becomes second nature very quickly. The fun is in the sense of variety Nimblebit has created. Are you going to take three people to Vancouver and wait for a bigger payoff, or make four speed runs to Montreal? Are you interested in taking over a continent, or establishing a well-oiled base of operations and franchising on the other side of the world? There’s a wonderful ability to create a business strategy and stick to it, all while knowing more options await to suit your play style and the time you have to give.

Making a clever return are much of the trappings that catapulted Tiny Tower to a permanent place on the iTunes charts (and in our hearts). Foremost among them? The 8-bit bitizen aesthetic that makes Pocket Planes feel like it too was dipped in video game culture. Put to work inside an astounding character engine, Nimblebit once again give us a world teeming with hilarious backstories, all of them implied in comical features, outrageous costumes, and everyman names. If anything, the diminished focus on character will have you eager to peer into the lives of every passer-by. What business does Uncle Sam have in Montreal, anyway? 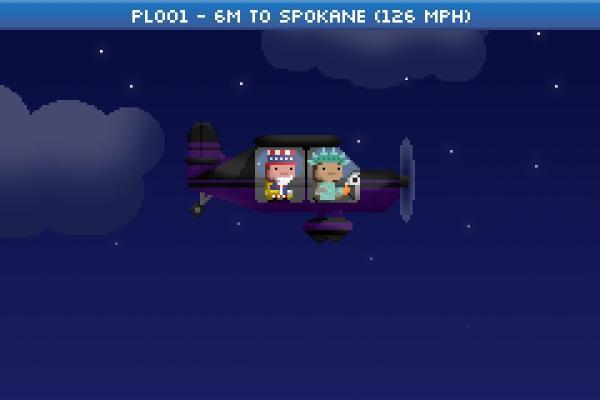 For familiarity’s sake, Nimblebit also brings back in-game coins and premium “Bux,” and then proceeds to shower them on you like they don’t want to make money. In all seriousness, though, the big returning star of Pocket Planes is the indie trio’s dedication to fun and user experience above the rush to monetize. Because I’m the greedy sort, I bought five dollars worth of Bux right off the bat to give my airline a jump start, and a week later I’ve got cross country operations with no end in sight to the money I purchased. If you’re not the spendy type, however, rest assured: checking in to the game two or three times a day and taking ten minutes to set your planes in motion will earn you more than enough of each currency.

And if you want to spend more than a little bit of time with the game, you definitely won’t regret it. Nimblebit isn’t trying to hide the time management at the core of Pocket Planes, so if that’s not your bag, you may find fault here regardless. Nonetheless, they go above and beyond to make extended play sessions feel packed with things to do, including mid-air coin and Bux grabbing for those tracking their flights in the air, costume swapping and plane painting for the more artistic among us, and a marketplace where you can put your cash to use hunting for parts to build a plane from scratch. 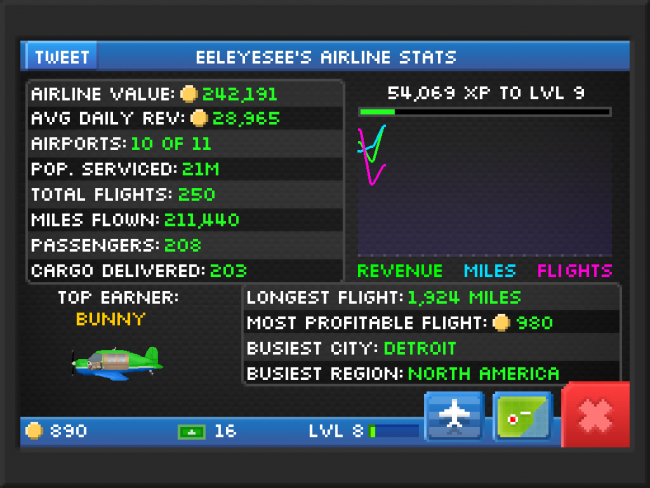 Perhaps most exciting, though? Flight crews! Team up with your friends by choosing the same crew name to take on regular competitions that target specific cities and deliveries, all for a chance at bux, planes, and parts. I can’t wait to see a user base build up and get competitive.

And I’d be very surprised if a massive user base doesn’t build up around Pocket Planes. Nimblebit has once again dropped you in the middle of a universe that feels like it was built just for you, and filled it with a deeper, more compelling mission. If you love strategizing, organizing, building something, and watching it grow, you’ll love this game. Oh, and fun. If you love fun.