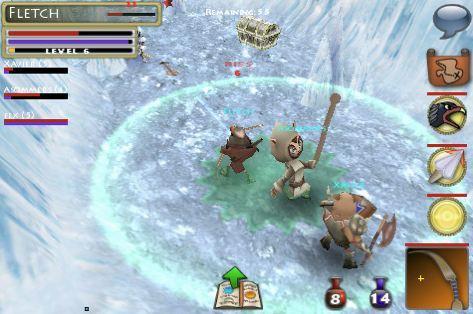 When you really think about it, Pocket Legends is a game that shouldn’t exist. How could a developer possibly get a 3D MMORPG like Everquest or World of Warcraft to work on the iPhone? More importantly, how can they possibly afford to be giving it away for free? It may not be as massive as its desktop counterparts, but Pocket Legends offers up an experience that few of us had believed was even possible on the iPhone.

Like any MMORPG, the staples of Pocket Legends are multiplayer and combat. You’ll join with strangers, jump into a storyline, and do battle with monsters as you level up your character and gather as much loot as you can carry. You’ll get to choose between a warrior, a mage, and an archer. Equipment upgrades, skill slots, stat tweaks – everything you know and love about the modern MMO has survived the transition to pocket size.

Controls are kept surprising manageable given the nature of the genre. You’ll control your characters movement using an on-screen directional pad, and combat can be initiated by tapping a large button on the right side of the screen. Special skills that you’ll develop as you level up will occupy the slots above this button, making it easy to cast a spell or taunt an enemy without ever being distracted from the action.

The game features some smart automation options, too. Tap the attack key twice to switch to auto-attack, which will cause your character to not only keep attacking an enemy, but to follow it should it try to escape. The only thing in the control scheme that needed improvement was the camera. Handling the camera is easy enough – you’ll swipe to change direction and pinch to zoom – but there wasn’t an option to simply tap and center the camera behind your character. Given the meandering nature of most levels, having to constantly adjust the camera felt like a much bigger hassle than it should have.

We were also a little annoyed by how difficult it was to find new equipment in the early levels. While drops were common, it was entirely likely that a level 2 warrior would get a sword that they couldn’t use until level 10. It was rare if ever that we stumbled across usable gear for the level we were at. 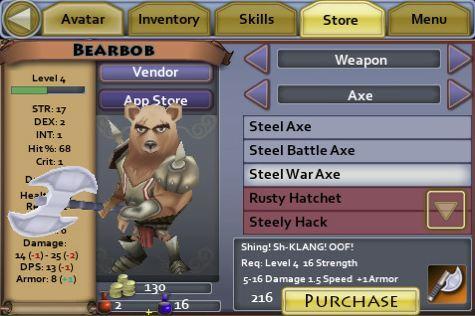 The game runs in true 3D – an absolute must for a traditional MMO – but the visuals suffer from both highs and lows. Characters always look great, and enemies have lots of personality. Environments on the other hand often felt tepid and flat. Certain elements, like leave and grass, felt like cardboard cut-outs. Much of the terrain would have felt right at home in a PC game from 10 years ago.

The breadth of content here is good, but not without a price. Rather than exploring an open world, players will join instances that make up part of a bigger campaign. Pocket Legends offers one campaign for free, but charges a $1.99 for each additional. Considering that the 15 levels in the free campaign can eat up a few hours when you play through them with each class, you’re already getting a good deal of content for nothing. If you like what you’ve seen by then, paying $1.99 for additional campaigns is a more than reasonable request. Pocket Legends really sets the standard for the freemium business model by mixing a tremendous of free play with some truly enticing pay content.

Before playing this game I would have never believed that the iPhone would be capable of running an MMORPG, let alone think it was a sensible platform for one. While it may still be a little lacking when compared to its desktop brethren, Pocket Legends is a monumental accomplishment in the world of mobile gaming. Not only is it a fun game that’s well-executed, but it’s a brilliant proof of concept. Here’s to hoping this opens the floodgates for future pocket MMO’s. Maybe we’ll see a mobile World of Warcraft yet.