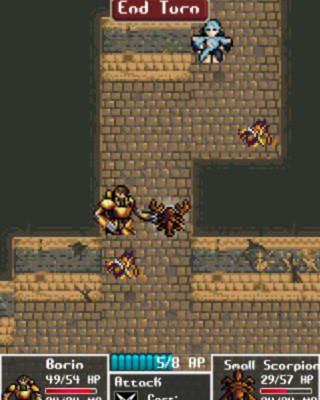 A fresh take on the classic RPG, despite a few chinks in the armor

Playing an RPG for the Super Nintendo with friends was always a complicated experience. The kid that owned the game always donned the controller, while you played the role of spectator. As your friend progressed through the game, casted formidable spells, and sleuthed through several dungeons, you finally mustered up the courage to ask for a turn. The only problem was, once you finally did get a chance to play, your friend had been playing so long that you had no idea what you were doing.

Pocket Heroes aims to go back into your childhood and surgically reconstruct it in a way where you and your best buddy are forced to take turns. Old-school RPG meets asynchronous play.

Visually, everything captures the look, feel, and sound of a classic 16-bit RPG. The sprite art is simple, but remains a perfect homage to an age when things were so much simpler. With no need for a complicated plot, your journey is as simple as a quest should be: “you are the good guy, now go kick the crap out of everything evil”. Perfect.

After choosing one of four classes (Mechie, Lunar Priestess, Rogue, and Paladin), it’s up to you to gather a party of four friends and start on your adventure. Each player takes their turn individually until they exhaust their action points (AP), giving the next in line a push notification letting them know that it’s their turn to do battle.

At its best, cooperative questing is a lot of fun. A chat bar at the top allows you to discuss tactics with your friends in-between turns, and working together on an old-school turn-based raid is an experience that you really can’t have anywhere else. Collecting loot, leveling up, and learning new abilities is as addicting as ever, and you’ll instantly feel like you’re right back in the early 90’s. 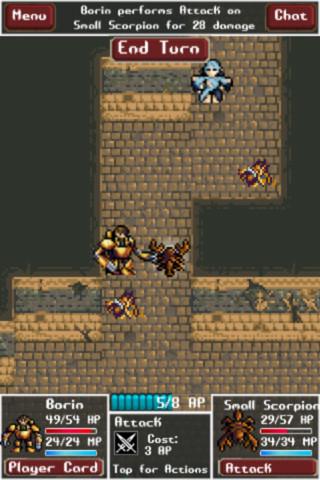 Unfortunately, these rose-colored glasses only work so long before you realize how difficult to understand some old games really were. Pocket Heroes is no exception, leaving you in the dark most of the time when it comes to understanding any mechanic deeper than simple gameplay. Over my first few adventures, my questions included, but were not limited to:

Exactly how far is my ranged attack? Why do I lose my ranged attack when I switch my weapon? Why do my special attacks frequently do less damage than my regular attacks? Why can my heal attack only revive my friend up to 2 health? Why can I heal my friend by not share health items? I gave my friend a buff – how big was it and how long will it last? The list goes on and on.

While most of these problems are part of the old “figure it out yourself” age of RPGS, it’d still be nice to get a little bit of guidance now and then. And despite these problems, which can possibly be excused to the nature of the genre, there are a handful of programming quirks that came up fairly frequently. 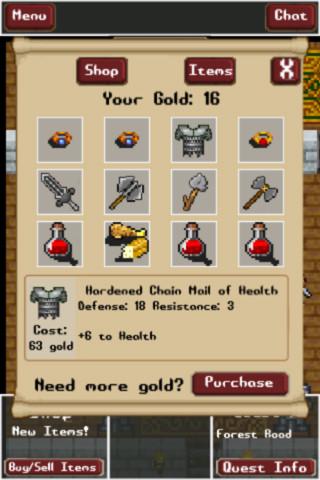 For one, I couldn’t get the game to work on my iPad after a continual “server problem” message popped up (granted, the game is for iPhone/iPod specifically, but I was playing it on the larger device double-sized). If you don’t like the way your turn is developing, you can go back to the game’s menu and restart your turn all over again. My game also crashed semi frequently when I tried to use the chat.

It’s these gameplay and programming issues that keep Pocket Heroes from being an amazing game, but every problem that I’ve listed seems easily fixable in future updates. Even if it isn’t perfect in its current form, Pocket Heroesis a fun experience that is both unique and nostalgic. With a few gameplay tweaks, it could easily become a must-have for all RPG gamers alike.