Home / Reviews / Pocket God vs Desert Ashes: When War is a Tropical Vacation 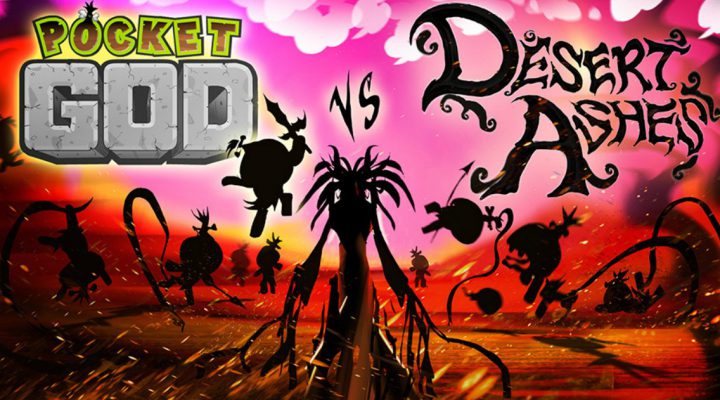 Satisfying strategy game in the vein of Advance Wars.

Cool character designs (for the most part).

It’s a bit of a weird-looking mash-up, to be sure. Pocket God’s primitive pygmy race (an unfortunate caricature of Pacific Islanders / African tribesmen) wield spears, tooth, and claw against the bizarre technology of the invading Landians. Nevertheless, the pygmies are capable of holding their own. 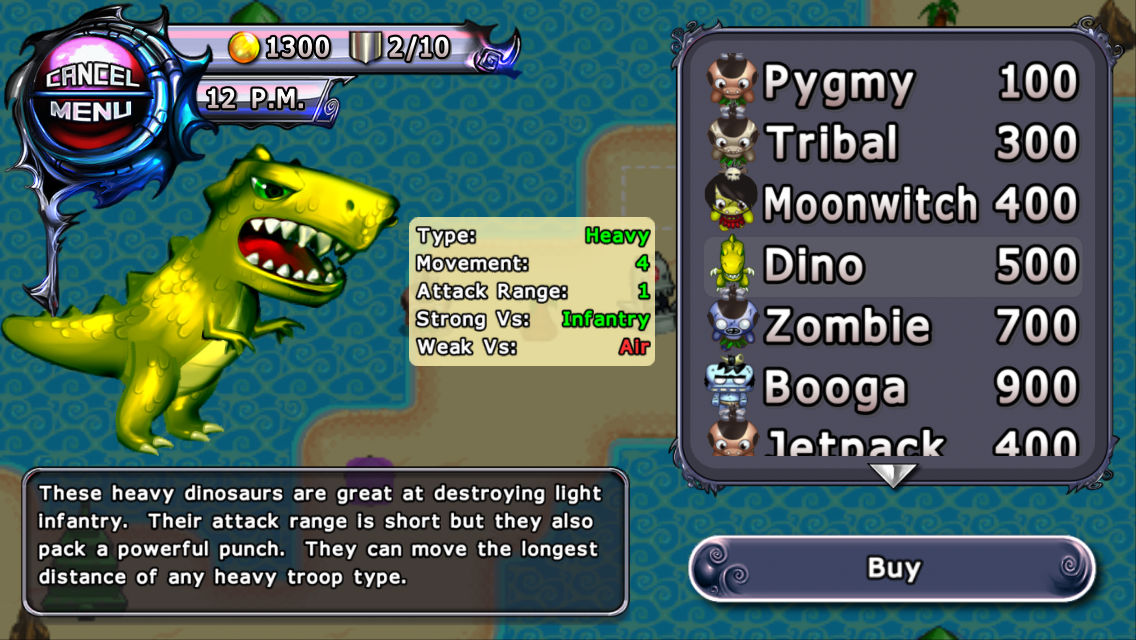 The gameplay driving Pocket God vs Desert Ashes hews close to Advance Wars, Nintendo’s military-themed turn-based strategy series. Advance Wars games are scarce these days, but Pocket God vs Desert Ashes is a nice substitute. It’s not quite as deep or involved as an Advance Wars title, but it provides the little jolts of satisfaction that come with managing your troops and your finances while watching your front lines creep closer towards an enemy’s stronghold. The game can use some a little polish here and there for easier navigation, however.

The meeting between the pygmies from Pocket God and the Landians from Desert Ashes isn’t fraught with drama. The latter stumbled upon the former’s home while doing a little world-hopping, and they determine the resource-rich world is ripe for conquering. The pygmies, being fond of their stuff, retaliate. 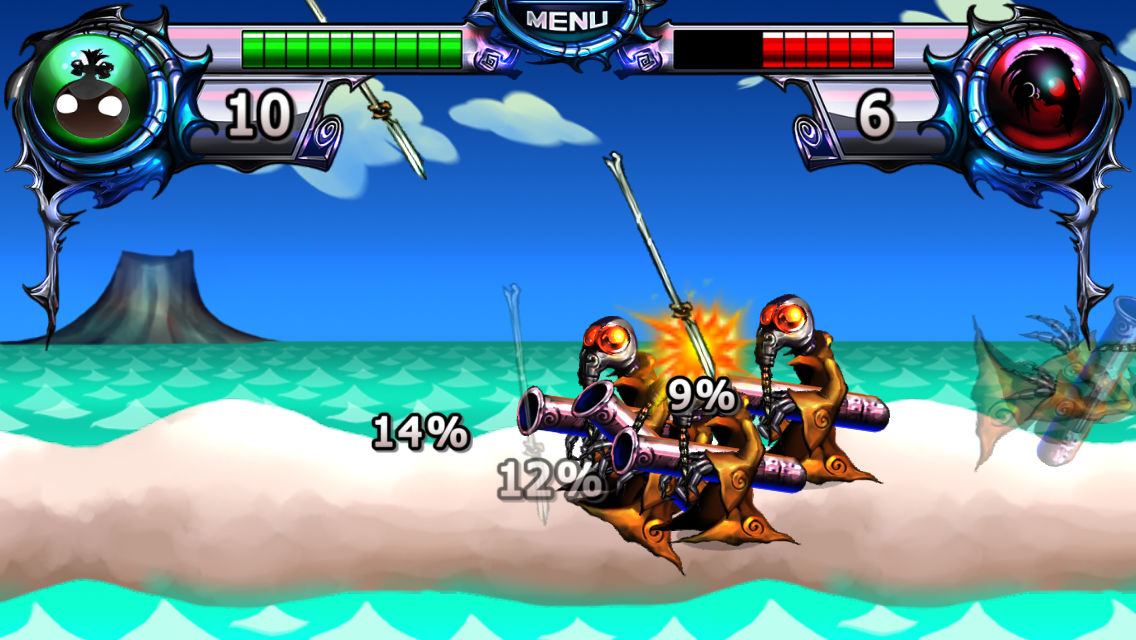 You move the pygmies across whichever terrain is under your feet, and when you’re close enough to a Landian, you attack. A pygmy’s movement speed and attack range is determined by their type. For instance, flying pygmies can move freely, while heavier troops amble along. Water-based troops are restricted to the sea.

There’s a rock-paper-scissors system to adhere to, too. Heavy units mess up infantry, whereas infantry murders flying troops. Water-based units will decimate anything unfortunate enough to be standing near the shoreline, but if a flyer gets near their territory, they’re in trouble. 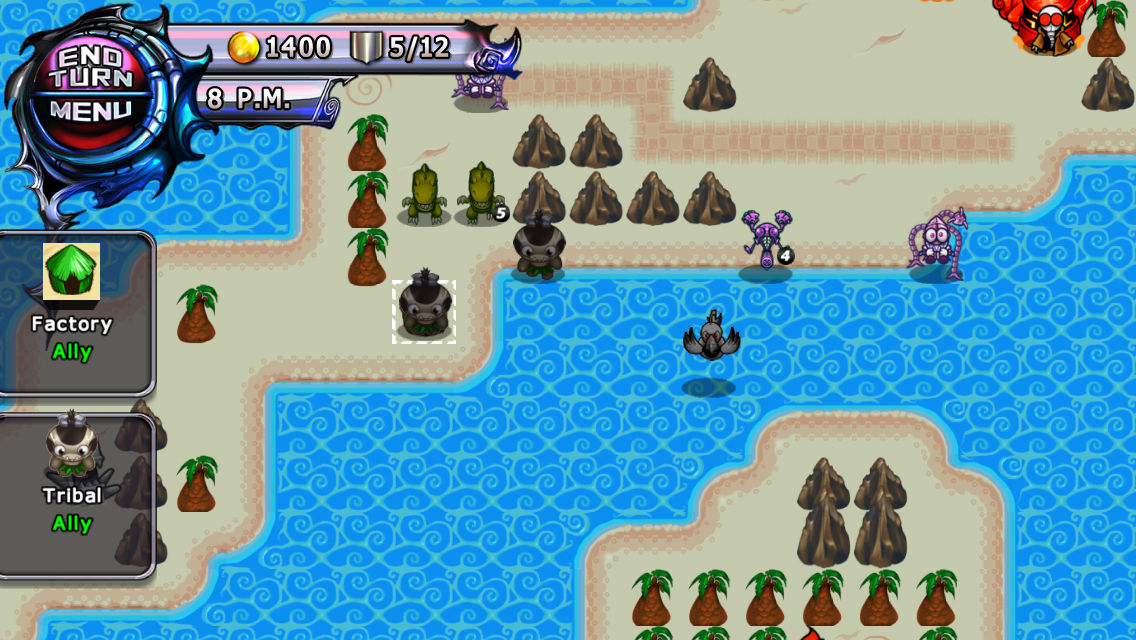 Even though some of the pygmy troops subscribe to the aforementioned caricature, others feature less offensive designs that wind up being a lot of fun. You can recruit dinosaurs wearing green berets, sharks with (frickin’) laser beams attached to their heads, and dodos that shoot deadly doo-doo at enemies from a distance. Seriously, how did these birds go extinct? 17th century hunters must’ve had access to some kind of primitive bazooka. There’s no way they would’ve had a chance against a fecal barrage otherwise.

The designs for the Landians are super cool as well, though this race of tech-loving invaders is coupled with a problem. Though each unit is named, there’s nothing indicating what type they are, making it hard to play paper-rock-scissors without some time-gulping trial-and-error.

In the same vein,  there’s no way to easily access a reminder of which unit type trumps which. You have to return to a unit-spawning point to get a refresher — or, again, perform a little trial-and-error.

Overall, however, Pocket God vs Desert Ashes is a very decent Advance Wars mimic, and fans of the franchise will have a good time — especially since there are no quick wins via in-app purchases. If you want to save your lush homeland, you’d better sharpen your wits as well as your spear.