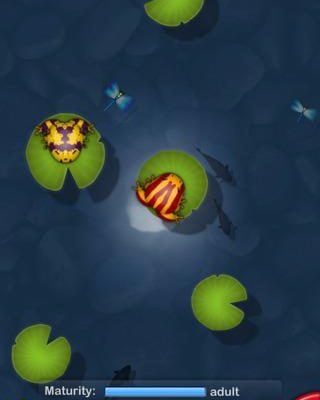 Normally having a frog in your pocket would have gotten you in trouble with teacher. Now, through the miracle of technology, you can have your very own Pocket Frogs, minus the slime. Too bad they’re still covered in warts.

Essentially a mini social game, Pocket Frogs lets you collect a wide variety of frogs for your viewing – and their hopping – pleasure. Once you have a couple of frogs, you can begin to train them by hopping around a pond (a mini-game where you simply tap on lily pads to make the frogs eat bugs as you pass them). This will allow them to be bred for potential new froggies. These tadpoles grow for pre-determined amounts of time in the nursery, then can be moved into a habitat once they’re all grown up.

While hopping around the pond, you can sometimes find another frog just sitting around. Land on that frog and the game asks if you want to breed with it (what, no dinner date first?) These random encounters sometimes yield a rarer frog for your collection. 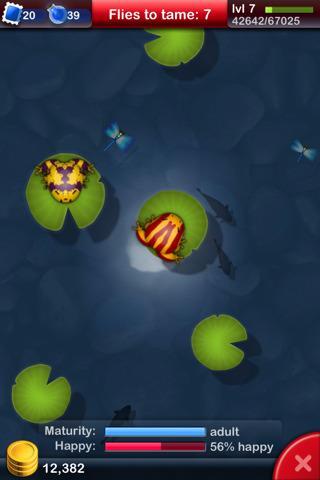 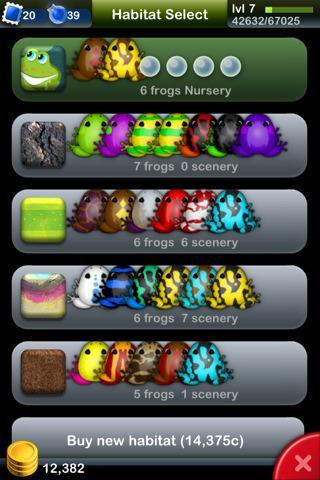 The rest of the game focuses on buying items to create habitats to make sure the frogs are happy. (If they’re not, just take them out to the pond and have them eat bugs; they’ll be fine.) As you work with your amphibious friends, you gain experience which in turn opens up new items in the shop, new frogs to work with and new habitats to increase your collection. Funds for the store are either found, gained through experience or by selling your frogs to the frog shop.

Pocket Frogs encourages long-term play by giving players a vast array of items, frogs, habitats and achievements to unlock and collect. While there are items that can be used to speed up the process for growing frogs, delivering items and other such tasks, it runs very much like most social games. Actions take a set amount of time, from a few minutes to almost two days.

In fact, that’s kind of the big problem with Pocket Frogs. There’s not really a lot to do other than manage the collection and hop around. With something like Touch Pets Dogs or other pet sims, there are multiple ways to train or bond with your animals. Here, it’s more like SimCity – or rather, SimFrogs. It’s all about stat management and opening up more and more content. This lack of activities makes Pocket Frogs feel like a bit of a grind sometimes. And with the delays for progress being long and arbitrary, progress ends up feeling contrived.

The weirdest thing, though, is that Pocket Frogs sets you loose in its world with very little help. When you tap on something new, you’ll get a short explanation of what’s happening in the screen, but not necessarily how it interacts with the rest of the game. For example, I couldn’t see why my frogs wouldn’t breed until I just took them to the pond, figured out how to eat flies and suddenly, a pop-up window shows up telling me that frog is now ready to rock ‘n roll, so to speak. But moving frogs from one place to another and figuring out what was what was mostly a matter or trial and error. 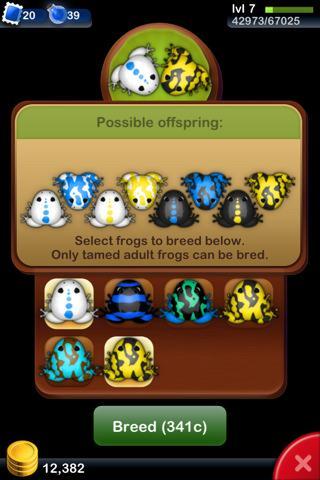 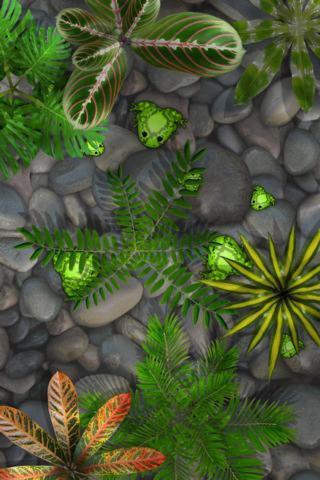 Most bizarrely, there is a help menu icon in the main menu but tapping it gets you nowhere. The pink question mark sits there, teasing you, as if it would actually answer your questions about the game. But nothing happens, no matter how many times you tap.

If you want to get some frog-collecting neighbors, you’ll need to sign up for a Plus+ account. Considering Apple just released their own social gaming platform, this extra account feels a little backward, and inconvenient. But if you don’t sign up for it, Pocket Frogs feels very lonely, and much of the game’s higher-level features will be off-limits to you.

Finally, you need to be dedicated to these frogs to keep them happy. Unlike a Facebook game which is easy to maintain (as most people log into their Facebook page several times a day) Pocket Frogs demands almost the same kind of attention. But most people are unlikely to open their app for a quick frog run with the same frequency as stalking their cyber friends.