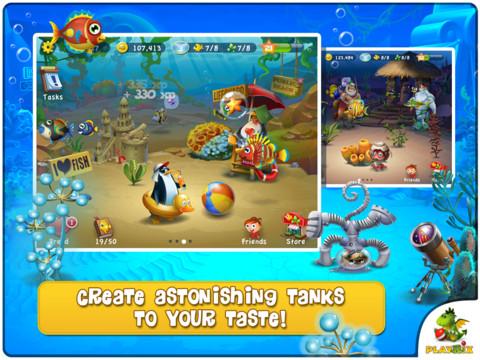 Pocket Fishdom’s waters are pleasant, but a bit tepid.

Pocket Fishdom is not to be confused with Fishdom, another game available on iOS (and a number of other platforms). Even though both games are spawned from Playrix, they belong in different tanks:  Fishdom is a Match-3 title, whereas Pocket Fishdom is about raising, breeding, and collecting your aquatic darlings. In fact, Pocket Fishdom is quite far removed from anything that resembles gameplay, though it’s still a decent and relaxing fish-breeding title.

If you’re already familiar with the watery realm of Fishdom, then you know that it’s populated by dozens of finned critters that you can interact with to a limited degree in between fiddling with the game’s Match-3 goodness. Pocket Fishdom makes fish-time just a little more interactive with the help of your very own aquarium.

In the early stages of the game, you’re granted a single aquarium and a breeding pair of fish from which all future lines of Filet-O-Fish sandwiches will be born (okay, no. These fish are too pretty to be processed). Once you’re set up, you can start breeding your new family in hopes of bringing in some sweet coin. Up to eight fish can occupy one tank. Pretending each fish has a voice from Finding Nemo is optional. Otherwise, you just need to raise the small fry to adulthood, feed them every so often to collect coins, accessorize your tank for earnings bonuses, and give the tank an occasional wipe when it becomes smeared with algae (eww).

Breeding is the real bait that draws you into Pocket Fishdom, however, and if you’ve played anything along the lines of DragonVale, you should have a good idea of how love works underwater. You choose two fish that like each other very much, and sequester them in a breeding tank for a variable amount of time. When they produce an egg, you move it into the nursery and wait for it to hatch. If the stars are on your side, you might get a rare fry. If you don’t want the spawn, you can sell it for money and experience. If you lose track of what you should breed, Pocket Fishdom features an achievements list that lends you some direction.

Aside from breeding, feeding, waiting around, and giving your tanks a swipe, there’s not a whole lot to do in Pocket Fishdom. That’s not to say it’s a bad title; pairing up fish gives you a little jolt of anticipation (though you can usually expect to be saddled with a commoner when the egg hatches) , and your fish are certainly good-looking, particularly on the iPad. There are also some fun details, like how your fish happily lash back and forth when you feed them. But compared to other free animal-breeding titles available on the App Store, including Pocket Frogs and the aforementioned DragonVale, your interactions with your fish are very limited, and the depth of the breeding system is as shallow as a rain puddle.

Still, there’s never a bad time to play with fish. If you’re super-enthusiastic about virtual aquariums, Pocket Fishdom is a decent catch. Those tanks aren’t going to clean themselves, after all.