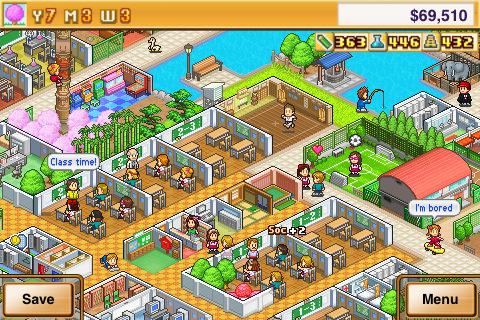 For a game about school management, it’s alarming how poorly Pocket Academy teaches its game mechanics

As someone who absolutely loved Game Dev Story and Grand Prix Story, yet really didn’t care for Hot Springs Story, I was very curious which type of Kairsoft game would rear its head in Pocket Academy. Would it be the compelling carrot on a stick experiences I enjoyed? Or the build-it-and-they-will-come gameplay that left so much to be desired. Well, you can probably tell from the score which game this is… and that’s a real shame.

Kairsoft has made quite a name for themselves with simple looking but surprisingly deep simulation games on our iOS and Android devices. We’ve developed games, managed spas, run racing teams and now control and guide a school and its students. Pocket Academy has you managing different schools, hiring teachers, building additions, and gently nudging students towards a decent career. It’s a world that should allow for lots of great simulation gameplay. Key word there…. should.

The sad truth is that there’s a huge issue with Pocket Academy, and it’s one you never really get past. The game is absolutely terrible at explaining what you can do and are supposed to do at any time. In each of the other Kairsoft games (including Hot Springs Story) there was a ramp up of the game’s mechanics, and they introduced each thing one by one. You can research that, upgrade this, level up those, etc. You understood that training people made them better in certain areas, and how those upgrade affected different areas. Pocket Academy isn’t just light on that, THEY NEVER TELL YOU ANY OF IT.

This is a problem no matter what, but if you’ve never played any of the other Kairsoft games before, then you’ll be lost beyond any enjoyment of the game. Heck, even as a huge Kairsoft fan, I was left floundering on what I was supposed to do – even at a very basic level. I ended up running a school into the red, and then having to search the internet to try and figure out how to play the game.

The main crux of Pocket Academy revolves around making the best students you can by providing an excellent school environment for them. Exactly how you do this is sort of left in the wind, and since you have access to building about 10 things right out of the gate, it’s sort of overwhelming and leaves you unsure where to start. Plant some trees, build a water fountain? If you like experimenting blind, then you’ll probably love this game. But hiding important information two menus deep on tiny screens of text doesn’t solve this problem. 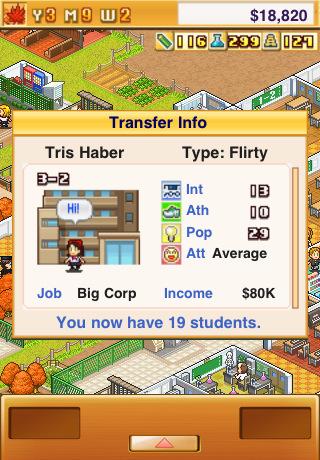 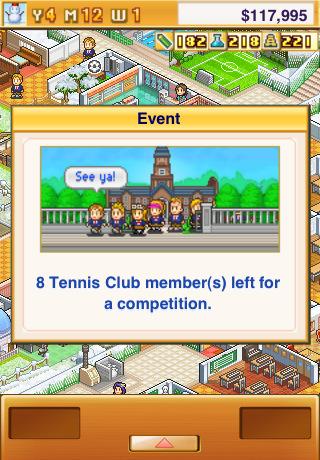 It may seem like I’m really harping on this point, but to me it’s a real deal breaker. And it’s a shame, because there’s a really detailed, really involved simulation game going on here – it’s just all locked behind closed doors and you can never really get a good look at it. There’s the system of student intelligence and relationships, the system of building and maintaining the school and it’s faculty, and managing the money and doing your best to keep fresh students coming in the door.

But there’s no way to really dig down to see how all those systems interact with each other in a meaningful way. Those gears are always constantly turning, but just never in your field of vision. With an excellent simulation in Grand Prix Story still fresh on the market, there’s just no reason to settle for such an inferior game.